The hunger strike by 12 parents and community activists in Chicago fighting for an open enrollment, fully public, high school in the Bronzeville neighborhood will soon pass the one month mark. On September 3rd, Chicago Public Schools announced a "compromise" that would have Dyett re-open as an open enrollment school but with an arts-based focus instead of the as the Global Leadership and Green Technology school that was submitted by the Coalition to Save Dyett. That school proposal, developed over the course of years with assistance from the University of Illinois at Chicago, the Chicago Teachers Union, the Kenwood Oakland Community Organization, Teachers for Social Justice, Black Metropolis Convention & Tourism Council, Blacks in Green, the Chicago Botanic Garden, and the Annenberg Institute, was submitted earlier in the year when CPS solicited proposals to re-open the Dyett campus. The announcement of an arts-based school was done suddenly and with no discussion with community members who have been fighting for years to keep a fully public high school open in Bronzeville.

And so the hunger strike continues, including continued public pressure on CPS and elected officials, and candlelight vigils outside the Obama family home: 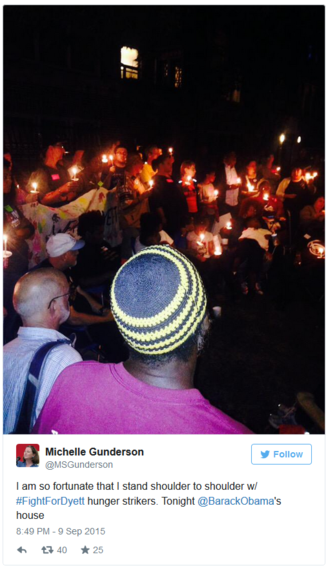 Pressure has perhaps increased with national media picking up on the story in outlets such as The New York Times, Slate Magazine, Essence Magazine, and Public Radio International. The Takeaway's John Hockenberry spoke with hunger striker and grandmother of three, April Stogner, for nearly seven minutes on the 25th day of the hunger strike. 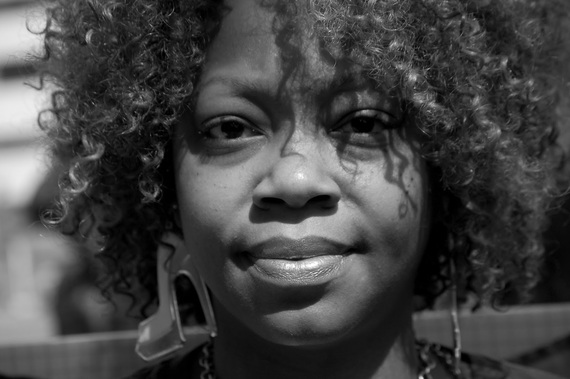 "...the decision to re-open Dyett as an open enrollment school we already had that decision last year to re-open it. What we've been fighting for is to have it as the global leadership school. What they're trying to give us is not what the community asked for. They never brought us to the table to make this decision. Many people think that it's a win for us, but we don't see it as that. We don't feel that that's victorious, and for that reason, that's why we're in day 25 of the hunger strike."

Peter Greene of Curmudgucation made an excellent point about this on his blog shortly after the CPS decision was announced:

Emanuel faced an ever-growing mess, and he had to decide what to save, what absolutely could not be sacrificed in salvaging some sort of end to the public hunger strike. And he decided the one thing that he absolutely could not give up was the policy of keeping community voices silent. Okay, let them have open enrollment. But don't let them speak. Don't let them have a say in making any decisions about the school. And just to make it clear, don't use their years of research and planning for the school design- because that'll make it clear who's still in complete control of what happens in their school.

This effort to run around the community activists -- the very people who have been in Bronzeville trying to make Dyett a success despite the continuous history of being undermined by Chicago Public Schools from day one -- allows Mayor Rahm Emanuel to claim he met the protestors "part way" and made a "compromise" while entirely ignoring their voices. The move was for public relations, not for the community and their goals.

And what are their goals? Ms. Stogner explained that to Mr. Hockenberry as well (emphasis by the author):

I would envision Dyett being a school that's connected to the other schools in the community, the grammar schools. You're talking about a school that has a beautiful garden, a rooftop where you can have a garden. Everything is geared toward green technology where our kids would be ensured to have a future in green technology and be sure that they'll have jobs. Yes, we like arts and all that. That's fine and dandy. But our kids can do more than dance and sing and jump around.....It's crazy when I was listening to the statement that you played from the mayor and they always say that they want to do what's best for the children. This is not what's best for our children. When you talk about community, the community should be involved in the decisions, and we were not involved. We submitted this plan. We've been working on this plan for well over five years, so it's funny that he said you're doing what's best for our community. You don't know what's best for our community, or we wouldn't have had 49 schools closing at one time. Tell the truth and say what it is. They just want to make money off the backs of our children, and they feel like they can just come into our community and take what they want. But we're not having that anymore.

This vision is incredibly powerful because it is not simply about what kinds of schools are available for the children in Bronzeville, but also it is about whether or not the community itself will be heard when it plainly makes clear what is desired. It is also about pointing out that when communities are called upon to "sacrifice" during times of economic crisis, the bulk of that sacrifice comes from communities that are disproportionately black, brown, and poor: 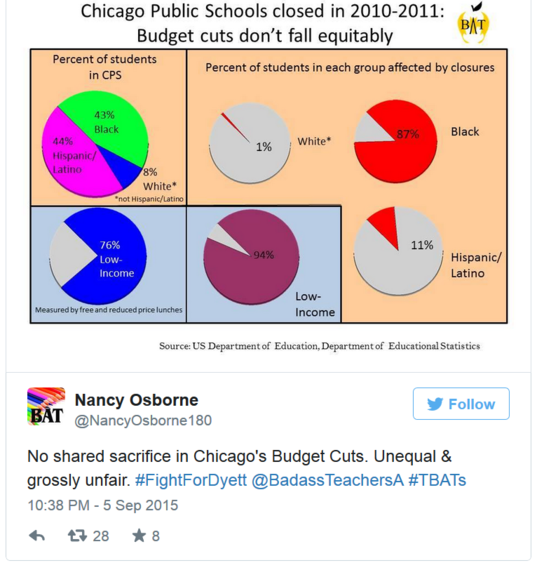 Julian Vasquez Heilig makes this abundantly clear in one of his recent posts about the Dyett hunger strikers. Chicago Public Schools spends $13,433 per pupil. How does that compare to wealthy, suburban communities unaffected by school closures or the need to go on a hunger strike to highlight the plight of their schools? Seneca Township spends $25,289 per pupil. Sunset Ridge spends $22,683. Evanston Township, $21,428. Ms. Stogner is keenly aware of this:

The mayor -- he's one of the biggest gangsters I've seen in a long time. Yes, anyone who doesn't value our kids that already speaks to what kind of person our mayor is. Anyone who closes schools -- those are community institutions. Where else would our children have to go? What schools need is to be invested in, not disinvested in. It's easy to take away all the resources from these children and these schools and say that they're failing. But what did you do to make sure that they were excelling? You took everything. They don't have libraries. No resources. You take out all of our black and brown teachers, people who love and care about our kids, who can teach them their history. That's not what you want, but you have money for charters, turnaround schools. I have a problem with that. Everybody should have a problem with that.

The perversity of this is abundantly clear: we task public education with offering opportunity to those willing to take it in our society, and to ensure that such opportunity is equitably available, we charge truly public schools with taking and accommodating all the students who arrive at their door, regardless of circumstances. It is one of the most truly democratic exercises in our society and it has historically expanded its reach as we have expanded the political and social franchise as well. But there is one glaring obstacle to it truly functioning that way: the same economic inequality that infuses and segregates our society along race and class similarly segregates our schools into institutions offering astonishing opportunities and institutions struggling to keep up with the needs that arrive every day without equitable funding. That term, equitable, is important because when a school has a high concentration of students with needs that must be accommodated, the appropriate per-pupil funding will almost certainly be greater than in communities where almost all children come from comfortable homes with abundant family resources.

And yet, instead of that promise, they are given closed schools, fired teachers, unaccountable charters, and blighted neighborhoods; the hunger strike continues. 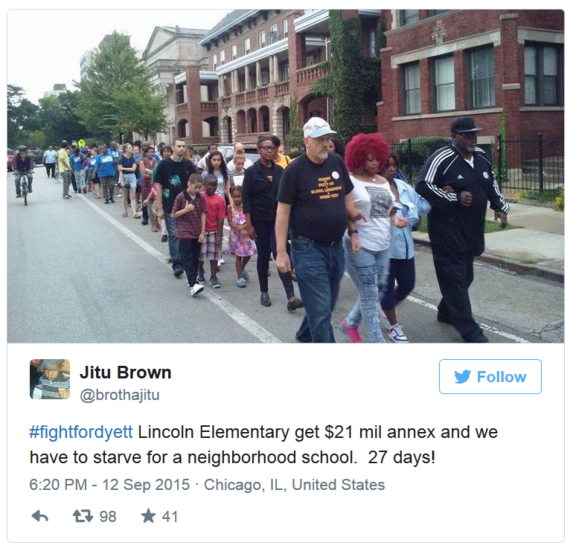 The #Dyett12 require all of us to ask just what would we sacrifice for the principals of democratic education and community voices in our own schools? I have to confess that I have been entirely lucky in my life in this question. I grew up in a suburban Massachusetts town with well-resourced schools. My own children are growing up in a neighborhood of New York City where we have never had to question if they would have access to excellent public schools. My children go through their lives never knowing what it is like to be suspected of wrongdoing simply for the color of their skin. Residents of our borough who live a mere two miles from us are not so lucky and live with injustices we can read about but will never experience. That in the city of Chicago in 2015 there are people who have been on hunger strike for nearly a month to simply have what their peers in the suburbs never even question -- an excellent, fully public school -- is heartbreaking and infuriating at the same time.

Ms. Stogner and her fellow hunger strikers offer a glimpse of a potential shifting of our education debate in this country to one that listens to the voices from the ground up instead of imposing solutions from above that more often than not hurt rather than help. When asked about her family, Ms. Stogner said:

My grandson, I brought him out with me yesterday for the first time because I felt like he needed to know why when they're at home eating, and grandma is just drinking water, why she isn't eating. I need him to understand that you are important, you do matter. I don't want him to believe that people can just come in his neighborhood and tell him he's not good enough to have a school to go to up the street from him -- a good community school, a great community school, a world class community school. He needs to know whatever you believe in, you stand up and you fight for it by any means necessary.

We should all be teaching lessons so valuable to our children.

A version of this post can also be found at danielskatz.net.