New Yorkers are fighting for higher wages, with increasing intensity over the past several months. In early April, between 10,000 and 15,000 laborers and students marched on New York. The genesis of the protest seems to be from the fast food industry as well as activist students.

The protestors have a point. Living in New York is incredibly difficult on minimum wage and many of the employees have to supplement with food stamps and other state welfare programs. But even with the state subsidies it's expensive.

Take a look at employer costs of a $15 Minimum Wage Employee: 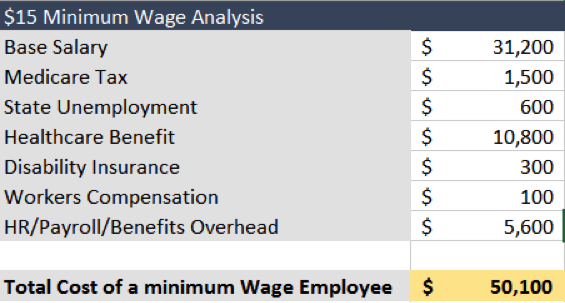 A US based corporation is responsible for handling a complex network of taxes, insurance policies, and regulatory compliance. This burden may end up falling on employers because 1) Companies may be more likely to pay than individuals or 2) Companies may be more competent to navigate the complexity than individuals. The current administration pushes this responsibility to the corporation instead of the individual via the Employer Mandate portion of the Affordable Care Act. This creates a drastic increase in the true cost of labor.

What is the impact?

At a certain point, the exceedingly high labor costs drive towards automation. There are several companies that are nearing commercial launch of the automated burger processor.

While these burger machine manufacturers are tight lipped about their costs, I took a breakdown of the individual components (and called on quotes) to get an estimate of what the machine will cost. 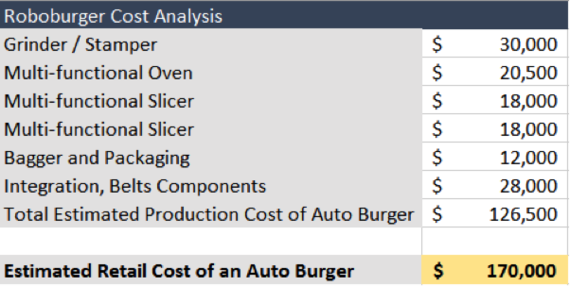 On equipment of this type, we can likely assume a $100k annual maintenance contract, which includes somebody 'on call' to jumpstart problems.

The auto burger machines can produce 8500 burgers in a day. I took my handy stop watch (iPhone) to the McDonald's at Times Square to get a relative comparison. I watched my quarter pounder produced by a few people, and it seems it takes an employee about 1.5 minutes to produce a burger, or 320 burgers a day.

A salaried employee can therefore create 6400 burgers in a month, and an auto-burger machine who doesn't take weekends can produce a 'whopping' 180,000 burgers in a month. This accounts for time off for cleaning and repairs, and the fact that no one wants a quarter pounder at 6:15AM.

The conclusion is that it will take ~25 employees to keep up with an auto burger machine on a month to month basis.

At a minimum wage of $8/hour or contract labor and no benefits, it's still tenable to hire those 25 employees. There's a strong business case for keeping the labor. When we jump to $15/hour with benefits, automation returns more burgers, cheaper.

At $15/minimum hour+benefit wage, it makes managerial sense for many locations to switch to full automation.

This gets at the fundamental dilemma of every wage increase. Fewer people will make more money when we increase the minimum wage, especially by such a stark amount. Nearly every study by the Congressional Budget Office over the past two years has reached the same conclusion. A few jobs at the $15 mark will remain, but at the cost of many jobs replaced by technology.

While this has been a common theme throughout history, this is the first time that we'll have replacement on this scale. Whether it's automated driving cars or auto-burgers, this time the innovations over the next few years will affect 20M+ workers.

Which brings us back to the protestors. Do they believe that they will be the remaining $15 employee while the two protestors next to them will be unemployed?

Do these protesters realize that if they are successful in securing a $15/hr wage, up to 70% of them will lose their jobs?

That's what the protest is pushing towards, and it seems like, if anything, some in the group would push against this new development. This is the first time that the minimum wage increase is high enough to make a fully automated solution a completely economically viable choice for struggling companies like McDonald's. Only a few of these protestors are really going to be lovin it at a $15/hour minimum wage.