By Debra Whitman and Jilenne Gunther

"For years I suffered silently. I didn't want to tell anybody. I couldn't muster the courage and you have to have courage." 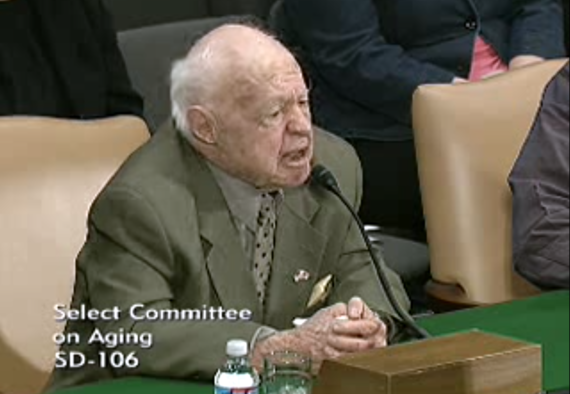 Financial exploitation will only get worse as the older population continues to grow. This problem has the potential to wipe out the retirement savings of millions of Americans. This is a problem for banks, too, as their losses exceed more than $1 billion in deposits each year as a result of financial exploitation of older Americans.

Hearing Mickey Rooney and many other survivors' call "to stop elder abuse now," we at AARP have joined forces with the financial industry to create a national initiative to fight exploitation. AARP's BankSafe Initiative is empowering financial institutions and the advocates to protect consumers from financial exploitation and keep retirement savings safe - before the money leaves the account.

As we celebrate the 11th anniversary of World Elder Abuse Awareness Day at an annual global summit, we applaud the leadership of many financial institutions that have voluntarily developed simple yet effective solutions to fight exploitation. Here are a few examples:

Problem: An investor suddenly can't manage his finances and his investment advisor suspects dementia. However, because of privacy banking laws, the advisor is unable to discuss his or her concerns with family members.
Solution: Wells Fargo Advisors developed a client emergency contact form giving financial advisors permission to contact a designated third party if they suspect exploitation or dementia. Now Wells Fargo can reach out to family members or friends for help when diminished capacity becomes an issue for a customer.

Problem: Many banks are seeing an increase in scams and exploitation of their 50+ customers.
Solution: The Oregon Bankers Association, in conjunction with the Oregon Department of Human Services, Oregon Department of Justice, and AARP, developed a training kit to help bank employees prevent financial exploitation. Since the training began in 2006, bank reporting of abuse has increased by 287 percent.

More of these solutions are outlined in two new reports, Snapshots: Banks Empowering Customers and Fighting Exploitation and Preventing Exploitation: Five Banks Leading the Fight. These reports serve as a guide for financial institutions wishing to expand their services, augment employee training, use new technology, or increase their community involvement efforts.

Mickey Rooney did his part, and now it's our turn. We urge financial institutions to use these guides as a tool to take action now.