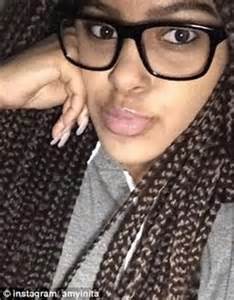 Prince died last week, but so did somebody's princess.

On Thursday morning, April 21st, Amy Inita Joyner-Francis, 16, was jumped by at least three girls in a bathroom at Howard High School of Technology in Wilmington, Delaware. Reports indicate that Amy purportedly went into the bathroom to "talk it out" with her peers who were angry with her over an unnamed boy. A fight ensued. When the fight was over one of the girls allegedly slammed Amy's head into the bathroom sink. Amy was airlifted in critical condition to the A.I. Dupont Children's Hospital where she was later pronounced dead.

I was especially bothered by Amy's story, because I remember what happened to me when I was in the 10th grade. On my way home from school one afternoon in the spring of 1996, a group of about twenty girls and boys from another school in the neighborhood followed me home while cursing and taunting me. They wanted to fight - or at least to see one - over a boy who I barely knew.

While they shouted things like, "I hope you feel like fighting today" and "we're gonna slice your face" (it was 1990s New York when slicing faces was the thing to do, I guess), I knew that if I stopped to fight the one girl that they would eventually all jump in - including the boys - and I would be seriously hurt. I was no punk, but I was certainly no dummy. So I kept walking and made the split decision to go to my neighbor's house across the street rather than try to make it to my own.

I remember it like it was yesterday. It seems like I was still telling my mother (who was across town at work) what was happening over the phone when I saw, while looking out the window, her car screech to a halt in the middle of the street. She jumped out of the car in her white lab coat amidst this group of angry kids and began shouting at the top of her lungs, "Who's going to cut my daughter?" before randomly pointing to each person and asking in her bold Brooklynese, "YOU, gonna cut my daughter?"

I knew this was not going to end well. But I ran out of my neighbor's house anyway, and me and my mother fought all of those girls (and some of the boys too) - wildin' out in the middle of the street - on a spring afternoon in '96.

I lived to tell the story.

Twenty years later, as a preacher, a pastor, and a professor, I certainly do not recount this day with ease or great pride. But Amy's tragedy has urged me to recall what I know for myself about the reality of violence perpetrated against black girls and women. That is, that all too often there is a man or boy at the center of it.

Amy lost her life to bullies in a bathroom over a boy. She was brutalized and killed by and among other girls who will likely lose a portion of their lives to a prison industrial complex that disproportionately incarcerates women who have, for many different reasons, taken "the hit," literally, for a man.

My thoughts on bullies and bathrooms this week are further complicated by North Carolina's recent passing of HB2, its lawful hatred of transgender persons, and its accompanying distorted reflections on fictitious threats against women in public restrooms.

If only the moral consolation of conservative cis-hetero (in public) so-called Christian manhood might be displaced by Amy's story, so as to make room for understanding that the greatest threat against women and girls is not the proximity of trans gender identities, but the intransience of patriarchy and its concomitant misogyny; both of which are so insidious that they authorize the control and destruction of women, not only under the gaze of men in the byways of the world, but even in the girls' bathroom at school.

Patriarchy and misogyny are weapons of mass destruction that kill and self-cannabalize women and girls.

For those of us left behind to mourn Amy and to reflect on the social realities that induce violence against black girls, these days the memory of my mother daring to fight for me is instructive. Despite the roadblock of respectability, my mother's intention was to protect me from harm, to bring me home in one piece, to defend my right to live, to insist that I not be afraid, and to affirm that she was on my side. Regardless.

Years later, I came to learn that the same girls my mother defended me against brought their own daughters to her community practice for their primary medical care. My mother recalled that although they could not look her in the eye, she cared for their daughters as if they were her own.

The truth is that we don't want to have to fight. Some of us don't believe in fighting. And it would be something if we lived in a world where we didn't have to. But in this world, littered as it is with patriarchy, misogyny, and racism so intense that it compels women and girls to hate themselves, even to death, somebody ought to know how... to fight for our girls in our schools, our churches, our homes, and even in these mean streets.

Their lives depend on it.