It's a fact. We do not know precisely how many people are held in modern slavery today. We do know that the number reaches into many millions - the newly released 2016 Global Slavery Index estimates a total of 45.8million. The term modern slavery has never been more frequently used by the media and within legislative and corporate spheres. Despite this, the pervasive low awareness within our largely globalised, modern society, allows this pernicious crime to thrive.

Ten thousand new laws and audits will not make great change; we need society to recognise modern slavery for what it is - a gross human rights violation. Only when people far and wide are part of the fight calling for the end of slavery will it become a priority for leaders, will resources be directed towards addressing it, and will the practice of forcing and holding someone in slavery stop being the easy crime that it is now. People power is key. And that starts with awareness.

Modern slavery can feel far removed from "ordinary" people, as can the fight to end it. That must change. We are voters, we are consumers, we are voices for those who can't speak up - and we are incredibly powerful, especially when we come together and put ending slavery on the local and global agenda. We can demand change at home in our households and communities, and use the internet to reach much further afield. The key to ending modern slavery lies in the hands of the people. Everyone, everywhere.

And as we continue to grow in might, the tide is turning. Never have the conditions for ending modern slavery been riper, just look at the positive signs from Mauritania. It was the last country to outlaw slavery, and was ranked the highest for prevalence of slavery in the previous Global Slavery Index. Yet just over a week ago, Biram Dah Abeid and Brahim Ould Bilal, two of the country's leading anti-slavery activists, were released after being imprisoned for leading a peaceful march against slavery. And for the first time, in a separate case, Mauritania's special anti-slavery courts saw the prosecution of two men. 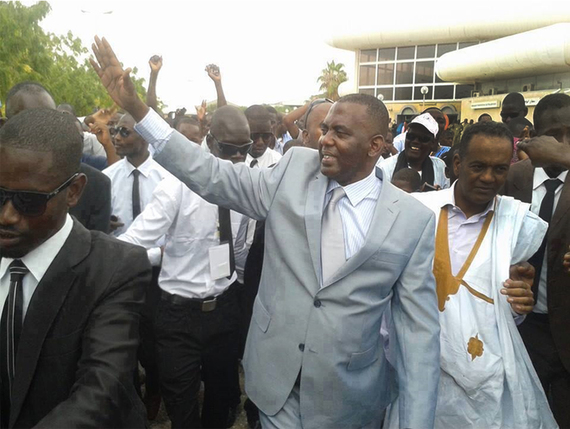 The release of the two anti-slavery activists came on the back of a pretty impressive show of people power as coordinated by WalkFree.org and our partners, including:

Now of course, ours is not the only pressure put on the Mauritanian Government. Alongside other non-governmental organisations, are representatives from intergovernmental organisations, workers, and governments around the world all pushing for change in Mauritania. The power of the global community coming together undoubtedly helped get the result we all wanted, and a large number of these actions were taken online.

So while 'clicktivism' and 'slacktivism' have become popular buzzwords used by some who disregard the place of social media and online actions as methods to genuinely engage activists and drive social change, I can't help but vehemently disagree. The same is not said of the abolitionists of the transatlantic slave trade, who pioneered many of the campaigning techniques we rely upon today: petitions, boycotts and tactics we might now call marketing. Taking an action online is not something to be disregarded, or looked down upon, and doesn't devalue the need for on-the ground development, advocacy and service provision work. In fact, they complement each other - just ask Biram and Brahim, two leading activists, rescued in part as a result of an online global movement.

So while it's intimidating to read estimates of 45.8 million enslaved around the world, we can't let the big number scare us, as we read it on our phone, tablet or computer. The very medium we are receiving this information on, can be our tool to help end it. To truly fight modern slavery, we'll need people power. You can start by lending your social media presence and joining our Thunderclap, and helping to mobilise those all over the world who aren't aware of the prevalence of modern slavery. The more people who hear the truth, the stronger our collective voice becomes in calling for freedom for those caught in modern slavery.