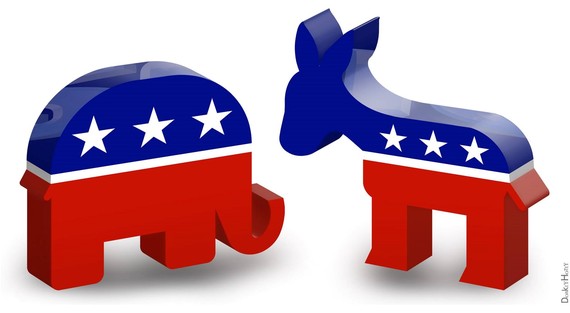 The Democratic and Republican conventions are over, and the 2016 general election campaign is now underway. Party officials at both conventions included planks on human trafficking in their 2016 platforms. Here's the official language from each:

2016 Democratic Party Platform
Protect Our Values | Trafficking and Modern Slavery
"We will stop the scourge of human trafficking and modern slavery of men, women, boys, and girls. We will use the full force of the law against those who engage in modern-day forms of slavery, including the commercial sexual exploitation and forced labor of men, women, and children. Building on the accomplishments of the Victims of Trafficking and Violence Protection Act of 2000, we call for increased diplomatic efforts with foreign governments to root out complicit public officials who facilitate or perpetrate this evil. We will also work to increase the provision of services and protections for trafficking survivors."

2016 Republican Party Platform
Liberty to Captives: Combatting Human Trafficking
"As an estimated 21 million people worldwide are trapped in modern day slavery, we are reminded to be vigilant against human trafficking in whatever form it appears. We will use the full force of the law against those who engage in commercial sexual exploitation and forced or bonded labor of men, women, or children; involuntary domestic servitude; trafficking in persons for the purpose of organ removal; and the illegal recruitment and use of child soldiers. Building on the accomplishments of the last Republican administration in implementing the Trafficking Victims Protection Act of 2000, we call for increased diplomatic efforts and accountability for foreign governments to prosecute traffickers, including penalties for any public officials who may be complicit in this devastating crime. We will highlight the need to stop slave labor, taking steps to prevent overseas labor contractors who exploit foreign workers from supporting military bases abroad or exporting goods to the United States. A Republican administration will strategize with partners around the world to prevent the demand for trafficking victims that makes exploitation lucrative and will prosecute sex tourists and domestic buyers to the fullest extent of the law. We will work at home and abroad to ensure that trafficking victims are identified among migrants, refugees, and our own citizens so they receive the rehabilitative care needed to heal and thrive.

"America's continuing participation in the international campaign against human trafficking merits our support. The goal of our domestic antitrafficking programs should be the rescue and safe return of victims to their homes, not creating a longterm dependency upon public support. We call for greater scrutiny of overseas labor contractors to prevent abuses against temporary foreign workers brought to the United States. The horrific deaths of smuggled workers on our southwestern border at the hands of drug cartels and other gangs highlight the need for total security in that region."

A broad nonpartisan coalition of leading anti-slavery and human rights organizations, including Free the Slaves, is asking the presidential candidates to commit to investing $3 billion per year in federal funds for anti-trafficking efforts if they are elected. An online petition drive is underway to demonstrate public support for adequate funding to confront modern slavery. You can read the Generation Freedom platform and sign the online petition here.