Slavery is endemic in our modern world, and present in every country. International efforts to combat this crime are slowly gathering momentum. But there is a need for high-level international leadership to accelerate these efforts. The next Secretary-General of the United Nations has an historic opportunity to play that role, and put the fight to end modern slavery at the centre of global development efforts. 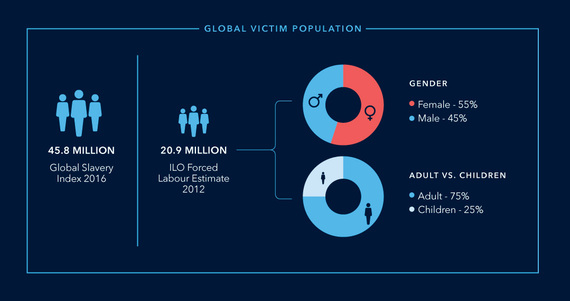 Despite the official success of abolition - slavery is now illegal in every country of the world - it continues to thrive behind closed doors, in remote regions, and down the backstreets of the world's cities. The most recent estimate by the Global Slavery Index put the number of people enslaved at 45.8 million. Slavery permeates the global economy. It is found in the Thai fishing fleets that supply our supermarkets, the South Asian cotton mills that produce our clothes, and the Congolese mines that supply minerals to make the world's smartphones.

Slavery is complex and in many regions entrenched - it will need a cohesive, strategic and coordinated final push to secure its extinction. Yet despite the challenges, it is ripe for engagement: powerful anti-slavery work is underway across the globe, and there is real and growing momentum in the fight against this crime.

Last year the world's states, in adopting the Sustainable Development Goals, pledged to end forced labour, human trafficking and slavery by 2030; national governments are implementing anti-slavery legislation; businesses are increasingly engaged; and faith leaders have reaffirmed their commitment to ending this horrific form of abuse.

But to succeed, the chosen incoming Secretary-General and UN member states will need to capitalise on this momentum and make anti-slavery efforts a cornerstone of the UN agenda in the coming years. The Freedom Fund has issued a statement to all candidates calling for greater attention to this crime of crimes.

Certainly there is much to lose - slavery may be a hidden crime, but it makes its presence felt. It undermines economic development, contributes to environmental degradation, challenges international peace and security, and is one of the most egregious and widespread human rights violations in the world today. As such, the UN cannot hope to fulfil its mandate without devoting serious efforts to eradicating slavery. Yet thus far it has remained largely peripheral to high-level discussions within the UN Security Council.

This is not to say that the issue has been neglected by the UN - on the contrary, there has been considerable and impactful international action by UN agencies including the Office on Drugs and Crime (UNODC) on human trafficking and the International Labour Organisation (ILO) on forced labour. But too often efforts have been fragmented, lacking in cohesion and political leadership. We need comprehensive multilateral action, as well as robust engagement with businesses and corporations, to succeed. All parts of the UN system need to work together.

The new Secretary-General could make a pivotal difference by enlisting the full force of the UN's agencies. By making combatting slavery and human trafficking a key focus area for their office they could provide central leadership to the broader UN system in tacking this complex crime. We are calling for the incoming UN Secretary General to tackle slavery head-on by appointing a Special Envoy to put in place UN system-wide action against modern slavery, engage with states and businesses to prevent human trafficking in conflict, and develop a proposal for a Global Partnership to End Modern Slavery by 2017. The Office of the Secretary-General will have an essential leadership role to play in ending modern slavery by encouraging stronger multilateral action and engaging with the private sector and civil society.

Ending slavery and human trafficking remains one of the great challenges of our time - only with true global leadership can we hope to end it.