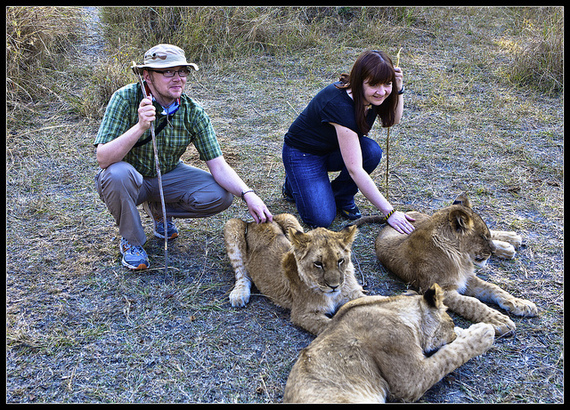 In recent years, "conservation" has become an increasingly widely-used buzzword for wildlife-related tourism products and operators across South Africa, in response to the growing global trend towards (or fad for?) responsible tourism. The word is often bandied about with little definition or real substance to support its usage, but even in its most abstract and indeterminate form it is capable of seducing so many of us.

Sadly, the seductiveness of the word "conservation" has allowed certain players in the wildlife tourism sector to exploit it towards their own selfish ends, and use it as a smokescreen for all manner of sins and unethical practices. But for how much longer?

Back in 2013, a number of South African newspapers reported on the alleged proliferation of "opportunistic fly by nights" posing as rhino conservation NGOs, who were said to be using donations from the public -- which were intended to help the endangered rhino -- to line their own pockets.

While various measures were put in place to weed out the illegitimate "organizations", still today there are conservationists who continue to voice doubts about where all the money raised for protecting South Africa's rhinos goes. Meanwhile, certain pundits have suggested that even some of the legitimate organizations joined the battle at least in part for financial reasons, and can pose an obstacle to a unanimous decision on how to counter rhino poaching by insisting on solutions that include them.

More recently, South Africa has come under flak for the controversial practice of canned hunting, also sometimes referred to as captive hunting. Whatever the alleged discrepancy between the two names, what this practice generally entails is breeding lions in small cages for the sole purpose of later dumping them into an enclosed area to be shot like fish in a barrel by trophy hunters who either don't know or don't care that these lions are completely unfamiliar with how to survive in the wild.

This practice, which is both legal and largely unregulated in South Africa, is often intricately linked to the popular tourist attractions of "cub petting" or lion "interactions". A number of South African facilities offer such activities, while for a few thousand dollars you can even spend a few weeks "caring" for the tame and captive bred lion cubs as a volunteer, all ostensibly in the name of "conservation".

Most volunteers are not made aware that these cubs are often bred under very stressful conditions and forcefully separated from their mothers at just a few weeks old. Volunteers are also certainly not told that when the cubs grow too big and potentially dangerous to interact with humans there is a good chance they will be sold to canned hunting facilities. Even if they are not, there is no evidence to suggest that captive bred lions can ever be successfully reintroduced into the wild.

There is equally scant evidence to support claims that captive-bred elephants can in any way contribute to conservation, though a number of operators who continue to offer elephant back safaris or similarly up close and personal interactions would have us believe otherwise. A recent NSPCA report has corroborated previous allegations of physical punishment of elephants at various South African facilities, and there is a growing consensus that all captive elephants endure great physical and emotional distress.

The good news is that a shift seems to have started, both in South Africa and beyond.

Over in Zambia, a leading "lion encounter" operator that has been faced with increasingly vociferous contention about the legitimacy of its conservation claims has suspended its lion walks until lions have been "successfully released into the wild". Ten years since they began operations, whether or not this will ever happen remains to be seen.

Back here in South Africa, the success of the recent documentary 'Blood Lions' -- an in-depth exposé of the canned hunting industry -- is putting considerable pressure on similar South African operations by revealing the ugly truth behind their conservation veneers.

Meanwhile, Mankwe Gametrackers and Pilanesberg Elephant Back Safaris led the way by ceasing their long-running elephant back safaris on the fringes of Pilanesberg National Park last year, and have subsequently reintroduced all of their elephants into the wild at an undisclosed private game reserve in Kwazulu Natal.

It is also worth noting that there remain a number of conservation tourism offerings that show you exactly where your money is going, and whose conservation credentials stand up to any scrutiny. At Madikwe Game Reserve, for example, a specialized Conservation Safari with Wild Eye will allow you to actively participate in the great work being done on the ground, assisting in the notching of white and black rhino as well as the monitoring of lion, cheetah and wild dog.

Or back on the fringes of the Pilanesberg, a new activity allows you to shadow a ranger as he monitors and tracks rhinos with the help of a telemetry device, paid for in part with your tourist expenditure.

For anyone who, like me, has been lucky enough to try such activities, there is a very obvious difference to the kinds of interactions mentioned earlier, and speaking to those involved yields much clearer and more credible substance to their conservation claims.

Nevertheless, for now a large number of dubious operators continue to boast top notch TripAdvisor ratings and awards and draw large numbers of misinformed visitors on a daily basis.

Those of us in the tourism industry who really care about our wildlife have a responsibility to continue to call out and counter the cons out there, and to encourage prospective visitors to do their research and learn how to ask the right questions. Otherwise, they won't be the only ones with blood on their hands.

Christopher Clark is a freelance writer and wanderer based in Cape Town, covering travel and current affairs across Africa.