So little attention is paid to HIV/AIDS nowadays, one might be forgiven for thinking it has been cured. But has it?

One million Americans have HIV/AIDS today -- as do more than thirty million world citizens -- many of them children, who caught the disease from their mothers' breast milk.

They are not cured.

HIV/AIDS might be called "controllable" now, for those with resources to pay for it. A therapy called ART (Anti-Retroviral Therapy) keeps many HIV patients alive. As long as the 30-40 pills are taken every day, in the right order and at the right time, HIV (Human Immunodeficiency Virus) is survivable.

But without the pills, (and they are not cheap) HIV advances to the death sentence of AIDS (Acquired Immunodeficiency Syndrome). HIV can be lived with; AIDS cannot.

The disease is managed, but not cured. Even the remedy carries major risks. People on long-term ART may face cancer, heart and lung disease, osteoporosis, and other life-threatening maladies.

How many people have been cured of HIV-AIDS? Exactly one: Timothy Ray Brown, better known as the "Berlin patient".

Residing in Berlin, Germany, Tim Brown had both leukemia and HIV, which he was managing by the ART pills. But to keep from dying of leukemia, Brown had a bone marrow transplant -- from a person immune to HIV.

Perhaps one percent of Northern Europeans are blessed with a mutation that prevents HIV from entering their cells and infecting them. (This might be an immunity passed down from survivors of Europe's Black Plague.)

But his treatment will not work for everyone. A bone marrow transplant operation is painful, dangerous, and depends on finding a suitable "match" for the donation.

Might there be another way to make a person immune to HIV?

Two teams of California stem cell researchers are taking on the challenge of HIV-AIDS: trying to make changes in the stem cells of the blood, so that what cured the Berlin patient might be done again across the world.

Team One is Calimmune, Inc., a company begun by David Baltimore, Nobel Prize winner and former board member of the California stem cell agency. That team is led by Ronald Mitsuyasu of the University of California at Los Angeles, and Jacob P. Lalezari, of Quest Clinical Research in San Francisco.

Team Two is comprised of John Zaia, David DiGiusto, Amrita Krishnan, and Paula Cannon from the Beckman Research Institute of City of Hope, and the University of Southern California in partnership with Sangamo Biosciences, Inc..

These two teams face a battle of microscopic ferocity. Lives depend on their work.

And complicated? Hearing them talk is like reading a bowl of alphabet soup.

Look at the following "word": CCR5.

CCR5 is a gene, part of our DNA structure. But CCR5 is not always our friend. It sometimes lets HIV into our bodies, like opening a door for assassins, so they may enter and kill.

Tim Brown was given a bone marrow transplant from a person who had that CCR5^32 in his body and Tim Brown was cured.

Could we put delta 32 into the gene structure and permanently lock the CCR5 "door"? Or could that door be removed altogether, snipping out CCR5 from the DNA chain, the blueprint of our bodies?

That is the hope of scientists funded by the California stem cell agency.

Meet medical researcher Paula Cannon from the University of Southern California (USC). Dr. Cannon is the president of the Keck School of Medicine Faculty Council, and the recipient of grant assistance from the California stem cell program. 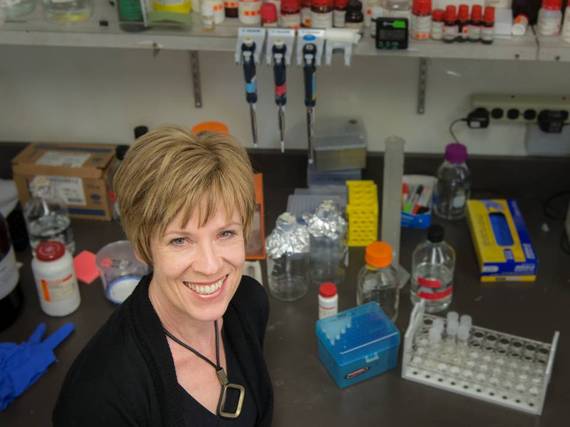 When I asked Dr. Cannon how she had chosen her career, she seemed a little embarrassed, saying she had chosen biology "almost at random" in college. She had done well, earning a degree in microbiology, but after graduation she "did a 180-degree career spin" and went into the music business in Liverpool, home of the Beatles. It shaped her future.

HIV-AIDS was ravaging the entertainment industry; people were dying with no hope from this modern day plague.

Time passed; another 180-degree career spin, and Paula Cannon was back into science again, but this time with a goal -- to fight HIV/AIDS.

As Dr. Cannon can talk science in "people-talk," I asked three key questions:

1. The CIRM grant involves something called a "zinc finger nuclease" (ZFN); what is that, and why is it important to the battle against AIDS?

"A zinc finger nuclease is a sort of genetic scissors. It can snip out bad stuff in the body's DNA chain. We hope to program ZFNs to snip out CCR5, so it won't let the AIDS virus in again."

2. Same question for ribonucleic acid (RNA)--what is it, why does it matter?

"If DNA is like a thousand-page blueprint for a house, RNA might be considered one page--maybe for just one room. RNA may bring very specific and permanent changes in the body's structure, putting ZFN where you want it to go."

3. How important was the California stem cell program to her as a scientist?

"The CIRM grant made it possible for me to fight against AIDS within a stem cell team structure; without CIRM, this would not have happened."--Paula Cannon, personal communication.

California is challenging this virus called AIDS: this thief of lives.

The battle is not won.

But it is joined.

Don C. Reed is the author of the forthcoming book, "STEM CELL BATTLES: How Ordinary People Can Fight Back Against the Crushing Burden of Chronic Disease", from World Scientific Publishing, Inc., available by pre-order from Amazon.com.