The late comedian Alan King had a joke that went something like this: A guest, on leaving his host's home, notices a sign over the door, saying, "May this house be safe from tigers." Bewildered, he says, "But there aren't any tigers here." "See," comes the reply, "It works!"

I think of that now as I hear politicians warn that if we don't stop ISIS in Iraq, we'll soon be stopping them on our own shores -- or, per Rick Perry, somewhere on the Texas-Mexico border. I also recall the warning seven years ago from then-President Bush that it was better to fight al Qaeda in Iraq than on our own shores. (No one needed to mention the borders of Manhattan for that implication to register.)

And, behold! No more skyscraper-demolishing planes on our horizon since we launched our decade-and-counting of... what shall we call it? Preventative warfare? Homeland security? Tiger eradication program? See? It works!

Except that, obviously, it hasn't. Whatever name we give our military activities in the Middle East, success or safety isn't one of them. I harbor no illusions about the cruelty or fanaticism or malign intentions of ISIS/ISIL (despite being intrigued by the way they're being demonized, to wit: they're especially dangerous because some of them are some of us and, worse yet, they're not dumb). But until very recently, the Iraq debacle seemed to have dampened the American impulse to insert ourselves in other countries' messes, as polls showed that we were tired or war -- although I suspect we're mostly tired of wars we know we can't win.

Probably no Americans are more abidingly tired of war than those who fought in Iraq and Afghanistan. So when Iraq Veterans Against the War (IVAW) gathered in Colorado for its annual convention and to celebrate its 10th anniversary, the question shimmering in the clear mountain air was, what were they celebrating?

IVAW was founded in by seven young veterans who had returned from Iraq feeling ill-used and betrayed. Soldiers do a lot of bellyaching, but these seven decided to do something about it. So, on a sultry August evening in 2004, they launched the organization with the ambitious goals of bringing U.S. troops home from Iraq immediately, seeing that those who served there were taken care of, and ensuring that Iraq be rebuilt and its governance returned to its people. Implicit was the long-term aim of challenging the ingrained ways of thinking that led their country into such a misbegotten war in the first place.

Ten Augusts after that first, so-hopeful one, some 50 IVAW veterans of recent wars and about an equal number of supporters, including members of the Civilian-Soldier Alliance, traveled up a winding mountain road to review what IVAW has accomplished and to plan what happens next. (IVAW has about 2,000 members now.) Sandwiched between hugs, tears, cheers, and conversations so intense you felt like your head was a champagne cork about to pop were panels and talks. A former Air Force sensor operator described a drone strike called in from a facility in Nevada to kill a "target," aka an Iraqi man he had followed into a strange intimacy over a year of surveillance. An academic detailed her surprisingly optimistic finding that nonviolent political movements are more successful than violent ones -- which occasioned considerable pushback about what constitutes nonviolence and even more about what constitutes success.

It felt familiar in so many ways, too familiar in others. Could we really be talking about battles in Fallujah and Mosul again? Was there yet another report of car-bomb carnage at a Baghdad market? Were Obama and Congress still dithering about who gets to call the shots on Syria? Was waterboarding once more in the news and -- shades of Vietnam -- how many "military advisors" were in Iraq now? (Assurances of "no boots on the ground" aside, these things have a way of mestastasizing.) Most relevant to IVAW, would there be a new crop of Iraq veterans so soon after the last American tank lumbered back across the border into Kuwait -- and then maybe to a police department near you? Does nothing ever change?

The answer, despite all of the above, is yes, and the central issue for IVAW as it enters its adolescent years is how it will change in response. A new name to reflect the membership and mission more accurately is a place to start. For my two cents, so is remembering the core values of the organization: why it exists and what it does well.

A while ago, Kelly Dougherty, one of the group's founders, complained that when veterans came home, everyone thanked them for their service, but no one wanted to listen to their story. Last month, she reminded me that one of IVAW's enduring goals has been to "change the narrative." Or, to put it less elegantly, to cut through the crap about the glories of war. 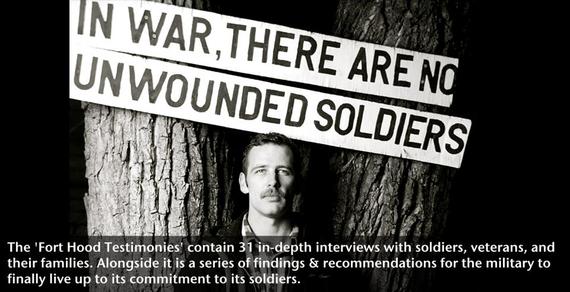 Long before the rest of us were paying attention -- and continuing now -- IVAW members testified about such critical issues as the psychological distress of veterans, deployment of sick soldiers, military sexual trauma, and inadequate care at the VA; about abuse of people in occupied countries, U.S. government surveillance of its citizens, corrupt military contractors, and the effects of the war economy on domestic policy -- along with the utter wrong-headedness of sending soldiers into a war where their main objective was to stay alive long enough to go home and prepare to deploy again. Those were real tigers and we ignored them at our peril.

IVAW has always excelled at testifying to the hard, ugly truths of war -- its members' wars, specifically, but, ultimately, all wars. Members speak with the authority of having been there and, by uniting to amplify their voices, they prove that resistance is possible. So I raise a glass to at least 10 more years of these stalwart antiwar veterans and their stories and their organization by whatever name because, dammit, we need them.