My name is Kuro. Like many new graduates, I had no idea what to do with my life after college. I felt lost, so I packed a backpack and set off alone to try and find myself on the other side of the world. I left without making any solid travel plans, but before I knew it I was making my way from Pakistan, across India, and up to Nepal. Being alone and isolated from everything gave me time to reflect on my life up to that point and I realized that I wanted to make a difference somehow. More than that, I realized that I wanted to be a part of something bigger than myself.

Up until my travels, I had never been aware of how large the issues of sexual assault and violence against women were around the globe. Late one night on the Nepali boarder, I learned a local ghost story about the "Kichkandi" -- ghosts of women who have been raped and murdered, who walk the rural roads at nights looking for male travelers to prey upon. I had been told that walking the highways at night would be too dangerous, that in doing so I was asking for a Kichkandi attack. Traveling men are so serious about avoiding the Kichkandi at all costs that that they carry talismans, paint female faces on their trucks, and in some cases even paint their nails. Anything feminine provides protection, because the Kichkandi only attack men. 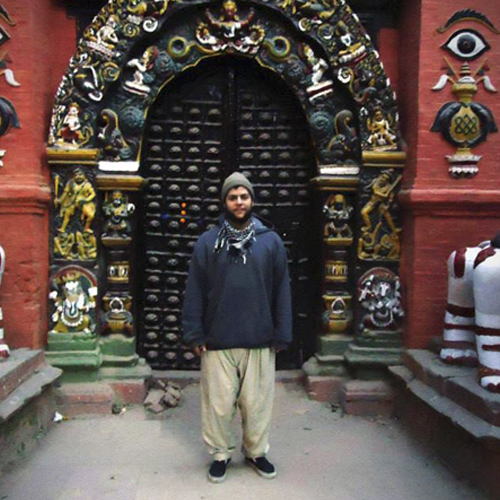 After hearing these stories, I began thinking about how old this folklore must be to have fully saturated the culture to the point that it had, how pervasive violence against women must be. I remembered hearing about the gang-rape that took place on a Delhi bus in 2012 and seeing a silent protest against the constant abuse, the women standing there quietly, holding their signs. I remembered women I knew in college who carried pepper spray on their keys, so aware of the constant threat of violence against them that they felt they must always be armed. I realized that women being raped and murdered is not some "new phenomenon" that is plaguing developing countries; women have been getting raped and abused around the world for most of recorded history, if not longer. And then I thought, "What if we take a different approach to addressing these issues?" Instead of peaceful protests, and attempts at changing laws, why don't we start arming women with non-lethal forms of protection?

In many developing countries, the justice systems are completely ineffective, rife with corruption and apathy and the millions of women living in them are in desperate need of immediate physical protection. They need an opportunity to take their protection -- and their lives -- into their own hands. They need an opportunity to break free from relying on the protection of others one that helps them grow and develop as individuals without living under the constant fear of being unarmed and alone by men who would seek to harm them. 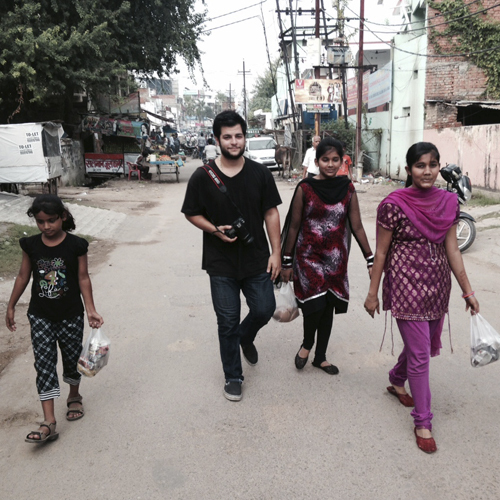 Being male and from Texas, I knew I couldn't just go into a foreign country and try to address what is primarily a woman's rights issue on my own. I had to find someone on the ground who not only understood the situation, but was dealing with it firsthand. While looking for a person or a group I could work with, I came across a news article about a Woman's Rights group in North India called Lucknow's Red Brigade., run by a woman named Usha Vishwakarma. Under Usha's direction, they take a unique approach to combat the issue of sexual assault by teaching women martial arts to fight back against their attackers.

After reading about what they do, I knew the Red Brigade represented an opportunity for me to help Indian women empower themselves in their fight against sexual assault and violence against women. After a little research I found a contact number for them and with the help of a close friend Usman Shafi (Ali) and his language skills, we had Usha on a Skype call less than a week later. Ali and I spent some time listening to her perception of the problem and her personal experiences, and then we explained my idea. We asked her if she thought pepper spray would help in their fight against sexual violence in her area, and if so, whether she would help distribute the pepper spray to girls in need if I came back to India and provided them the pepper spray for free. She loved the idea and two months later I was back on a plane headed to meet her.

After landing in India, I and a friend drove to Usha's village to meet up with her and her Red Brigadiers, as they call themselves. With their help, we organized and conducted the first "Protection Drop" completely free to local women. During the hour long presentation, we gave them instruction on what pepper spray was, how to use it, when to use it, and after every attendee signed an honor pledge they were given their own can of military-grade pepper spray. 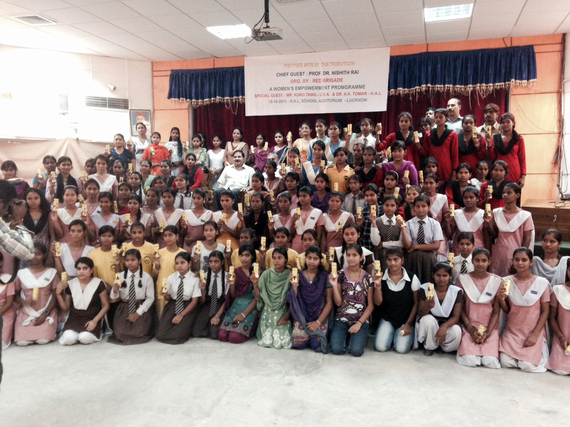 The response was overwhelming. Women and girls ranging in age from 14 to 50 showed up to arm themselves, some of whom traveled several hundred miles by train to get a free can of pepper spray. I have stayed in touch with Usha since our first drop, and the effects of arming these girls and women have been more far reaching than I had first anticipated. On one of our last Skype conversations, Usha told me about a girl whose family had refused to allow her to attend university night classes in a neighboring city, but after getting a can of pepper spray at the drop and showing her family that she was armed and knew how to use it, she was allowed to resume her schooling. Usha has also noticed a dramatic change in many of these young women's self-perception and self-confidence, because it has freed them from their fear of being attacked while living the life they choose.

Yet, while the first drop has seen success, there are still many women and girls in the area who are in desperate need of further protection. Just this passed week, two sisters were kidnapped near their village in North India. Their gang-raped bodies were found hanging from a mango tree, only a hundred miles from where the first pepper spray drop took place. You cannot take a peaceful approach with attacks like this, women are being raped and murdered, their bodies being hung on display. Usha and the Red Brigadiers traveled to the village and took with them the remaining cans of Pepper Spray I had sent them, arming as many of the girls as we could. The two young sisters were attacked while alone in a field, if they had some form of physical protection, things might have turned out differently. The below photo was sent to me from Usha.

WARNING THIS IMAGE IS EXTREMELY GRAPHIC:http://i.imgur.com/KjnsOZj.jpg

This first pepper spray drop was funded out of my pocket, but it was important to me to create a mechanism that can continue to provide protection for free without the need to rely on donations for drops to continue. So I started a socially conscious company following a one-for-one business model in hopes of continuing this type of operation. While on my travels, I came across handmade cloth wallets that I thought might appeal to people in the United States. With some minor changes in design, I have begun selling them here in the states through my website. In an attempt to address issues of sexually-based crimes on both ends, I employ refugee men in Nepal in the creation of the wallets in the hopes of giving them not only a source of income, but also a positive outlet for their time and energy. 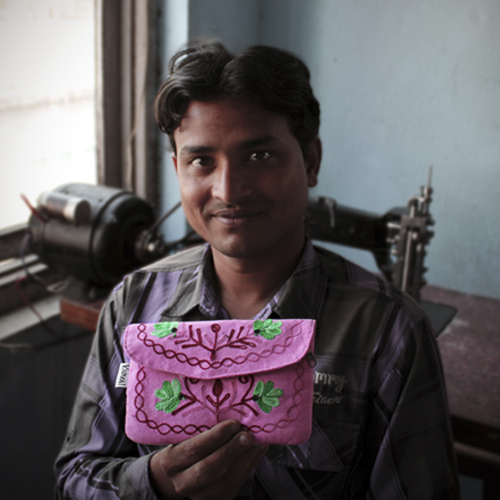 After the success of the first drop, I have been planning to do more drops throughout India in the near future. Eventually I hope to expand to other countries as well, because violence against women is not limited by geographic borders. While I recognize that education, not pepper spray, is the long-term solution to violence against women, my goal is to help local women's rights organizations provide a practical, immediate solution to the sexual assault and violence women and girls face daily in their communities.

To help support the project, you can visit at www.kuros.org or on facebook.

I cant thank my parents and sister enough for the emotional support, my friends Ali and Samar for all of the help both on the ground here in America and in India, and Kearstyn Takemoto for editing my article.