The late Nelson Mandela once said, "[T]o be free is not merely to cast off one's chains but to live in a way that respects and enhances the freedom of others."

No one will deny that Nelson Mandela was one of the most powerful human symbols of justice and equality, and as we remember Mandela's remarkable achievements, it's important to recognize where inequality still exists. While many countries take steps forward, one country has taken a significant step back for many of its citizens over the last few months. People who were born in the Dominican Republic, who have never known another country as home, are losing their citizenship.

Meet 10-year-old Maria Fernanda. She wants to be a lawyer when she grows up, but that's being threatened because of a new sentence by the Dominican Republic's Constitutional Court. The court revoked the citizenship rights from all persons born in the country to parents with irregular immigration status. Even more shocking, the ruling will be retroactively applied to all persons born in the Dominican Republic since 1929 -- stripping citizenship from hundreds of thousands of people. 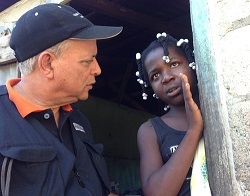 The policy has been in place since 2007. Maria's mother, Hilda, was first affected in 2011, when the government denied her an identification card even though she was born in the Dominican Republic. Because of her mother's irregular status, Maria Fernanda is also being denied her birth certificate. In the Dominican Republic, you must show proof of citizenship to continue past the eighth grade and get a new birth certificate for every use.

Even though Maria Fernanda is only in the fourth grade, her school is already asking for her certificate. Hilda fears her daughter will be unable to continue schooling. "If they are already asking for their documents now when they are in the lower grades, when they get to the higher courses, they will not be able to study," she says.

What will happen to girls like Maria if this policy is not overturned? Without access to an education or even to a document that says she exists in the eyes of the government, instead of becoming a lawyer, Maria could likely become a victim of human trafficking, as could many other children in the Dominican Republic. According to the U.S. State Department, the large population of children of Haitian descent "is particularly vulnerable to trafficking." This assessment was made prior to their citizenship being taken away. As children whose citizenship is not being recognized will grow up stateless, they will be unable to finish school, gain employment in the formal sector, access proper health care, vote, get married, obtain a passport, or even open a banking account. As opportunities for their future to thrive are taken away, their vulnerabilities to trafficking, abuse, and exploitation will only get worse.

Just last year, the Dominican courts had their first forced labor conviction. The case centered on a forced begging ring made of children of Haitian descent who had no papers or identification documents. The recent ruling makes children even more vulnerable to this kind of exploitation. From forced begging to agriculture work to sexual exploitation, children who are not recognized as citizens of their own country will easily slip through the cracks.

Like Nelson Mandela, there are youth in the Dominican Republic who are fighting for their freedom. World Vision is helping mobilize these young advocates through a campaign called Mi Derecho, Mi Ciudadanía (My Right, My Citizenship) to call upon leaders of the Dominican Republic to restore full citizenship rights to people affected by the Constitutional Court's sentence. A delegation of youth advocates will be presenting a petition, signed by supporters globally, to the Dominican government next week.

Nelson Mandela also said, "A fundamental concern for others in our individual and community lives would go a long way in making the world the better place we so passionately dreamt of." You can help achieve this by adding your name to the petition at http://bit.ly/myright-petition.