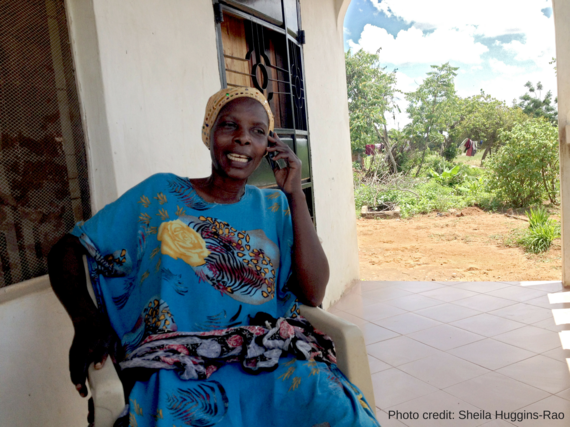 Sometimes a small change can make a big difference. Across sub-Saharan Africa, a new kind of sweet potato is helping families guard against vitamin A deficiency. Radio is helping to spread the word. And it doesn't stop there.

The woman you see pictured here is Mwanaedi, a farmer from the village of Mwasonga in Tanzania. While she looks to be having an ordinary phone conversation, the circumstances of the call are actually quite extraordinary.

We were visiting with Mwanaedi on her porch when she took the call. We heard her explain to the caller the benefits of a particular variety of sweet potato and share tips on how to grow it, suggesting to plant the vines just before the rains in high, well-drained ridges. And she arranged to provide some vines.

Mwanaedi is an orange-fleshed sweet potato (OFSP) farmer and vine supplier. By selling OFSP vines to other farmers, she is helping more people grow and eat this more nutritious alternative to more traditional varieties of this staple crop.

It came as no surprise to us that Mwanaedi was being sought out for advice on OFSP. She is a member of farmers' group that began growing it more than ten years ago. And she's also known for the OFSP bajias (fried snacks), crisps, and noodles she makes and sells to a local food vendor.

What was surprising was how the call came to be.

When she got off the phone, Mwanaedi explained that the caller was a female farmer in Iringa -- a community some 700 kilometres away -- who was interested in buying some vines for her farmers' group.

Mwanaedi's phone number had been shared over the radio as a supplier of OFSP vines, announced as part of a special radio series about OFSP broadcast across Tanzania by Radio Maria, one of Farm Radio International's broadcasting partners.

That's the power of radio, people, and good ideas. And OFSP is a mighty good idea.

A hidden hunger: Childhood vitamin A deficiency in sub-Saharan Africa

We know that getting enough vitamins and minerals -- especially in the first years of life -- is necessary for physical, mental, and dietary health. But many families in the developing world are simply not getting the nutrients they need -- even if they are getting enough calories. This is what we call "hidden hunger."

Children are especially vulnerable to hidden hunger. Worldwide, almost half of all deaths of children under five years old are attributable to undernutrition. In childhood, it often manifests itself in stunting, characterized by failure to thrive and reduced immune functioning that leads to frequent and recurring infections.

In Africa, the number of stunted children is on the rise. Children are not getting enough of what they need to be healthy -- vital nutrients such as vitamin A. In sub-Saharan Africa, more than 43 million children under five are at risk of vitamin A deficiency (VAD), a condition that can result in blindness, developmental delays, and even death.

The solution? An orange revolution

One strategy for addressing the complex issue of malnutrition and vitamin A deficiency, in particular, is biofortification, which involves using conventional cross-breeding to develop more nutrient-rich varieties of crops like OFSP.

OFSP is the first biofortified crop in sub-Saharan Africa to contain high amounts of beta-carotene, which the body converts into much-needed vitamin A. This year's World Food Prize was awarded to four of the scientists who helped develop it.

Since biofortification often involves breeding micronutrients into staple crops -- which households are already growing and consuming -- it is a promising and potentially cost-effective way to reduce VAD and other micronutrient deficiencies. In Tanzania, sweet potato is customarily eaten in the morning with tea. A simple switch to OFSP can enhance the daily nutritional health of even resource-poor households.

But, until recently, the orange varieties of sweet potato we see in North America were not grown in Tanzania. White and yellow sweet potato varieties were -- and continue to be -- more common. Starchy and dry, these are the sweet potatoes that Africans are used to.

Breeding efforts, therefore, focused on developing a sweet potato high in beta carotene (and therefore bright orange) but with the texture and taste that most Africans prefer. With this done, the key challenge is helping more African farmers learn about, grow, and eat vitamin-A-rich OFSP.

Getting cooking with OFSP

In Tanzania, with funding from the Bill & Melinda Gates Foundation, Farm Radio worked with Radio Maria to develop Kilimo Chetu (Our Farmer), a weekly radio program on OFSP. First broadcast on Radio Maria in 2013, the program quickly became a popular program nationwide, serving more than 800,000 listeners across the country.

Kilimo Chetu featured a live cooking show to help listeners learn how to prepare OFSP. In one episode Mwanaedi shares her own OFSP recipes. "If you see orange color it is the sign of a nutrient: vitamin A," she explains while she cooks.

The demand for vines was so high that the radio producer and Farm Radio staff developed a system to connect buyers with OFSP vine suppliers across the country. It enables farmers to get contact information for local vine suppliers through their mobile phones at no cost.

Through innovative radio programs like Kilimo Chetu, and collaborative efforts between Farm Radio International and agricultural research centres like the International Potato Center, farmers like Mwanaedi are boosting their health and incomes while enjoying the sweet rewards of their investments.

"Even if the rains are poor, I can still earn enough cash from selling OFSP vines," Mwanaedi says. With the revenues from OFSP, she sent her eldest daughter to college and covered all school costs for her other three children.

And the benefits go far beyond Mwanaedi and her family. "You can see that there is less malnutrition in the village since we started growing OFSP."