On Monday, October 24, the White House hosted an event to celebrate Filipino American History Month for only the second time in its history. Sponsored by the White House Initiative on Asian Americans and Pacific Islanders and the White House Office of Public Engagement, the Briefing brought together over 150 community leaders from around the country, as far away as Alaska. An ambitious agenda included panel discussions on issues such as Education, Veterans, Health/ Mental Health, and Immigration. The event also included cultural performances from Parangal, a San Francisco based Philippine Folk Dance company, Broadway Barkada, featuring Filipino Americans starring on Broadway in New York, and hip hop star from the Black Eyed Peas, apl.de.ap, with Liane V. and Jessica Reynoso. Federal agency officials working on critical policy issues addressed the audience, and the keynote address was given by Nani Coloretti, the Deputy Secretary of the Department of Housing and Urban Development and the highest ranking Filipina American in the Administration. 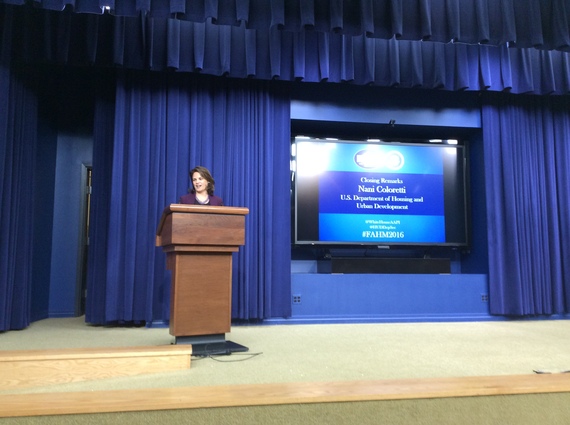 Filipino American organizations and advocates came together around the Briefing to connect and share information on activities and initiatives around the country. I serve on the Executive Committee of the Filipino Veterans Recognition and Education Project and we held a National Meeting on Sunday where we provided an update on our campaign to secure a Congressional Gold Medal for Filipino WWII veterans. In the year since the legislation was introduced, our work to mobilize the community across the country has resulted in passage of the bill by the Senate in July 2016, and in the cosponsorship of more than 305 members of the House. The bill is steps away from final passage, and our work this week has launched our national "all hands on deck" push to finally get this across the finish line during this Congressional session. We announced our social media campaign using Facebook and Twitter to direct action on the House Republican leadership to pass HR 2737 without delay.

For me, this work has never been more personal. While I was on the stage, I took a couple of opportunities of "moderator's privilege" to reaffirm the wisdom that the personal is political: