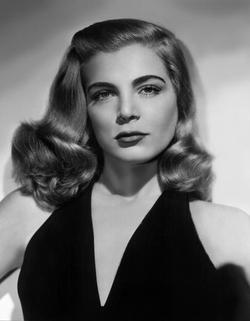 The heavy-browed, sultry-voiced Scott graced 22 movies, primarily film noirs made between 1945-57 in which she played one of the genre's most babe-o-licious troubled women.

"Gee that was a really good movie," said the still slender 87 year old after bounding to the Academy's stage following a screening of "The Strange Loves of Martha Ivers". Praising herself amongst the film's stellar cast of Barbara Stanwyck, Van Heflin, and Kirk Douglas (in his film debut), she winningly added: "I was pretty good in it too."

Scott shared with the audience her beginnings as a film actress: the way super-agent Charles K. Feldman discovered her in the New York theater, then brought her to L.A. in 1945 to test for Warner Bros and ensconced her at the Beverly Hills Hotel: "I was all alone in that beautiful hotel and no one talked to me for three weeks. I thought 'this is very odd,' and so I called Charlie Feldman's office. 'Oh,' he said to me, 'We forgot you were here.' "

"Finally they sent a script to the hotel and I stayed up all night preparing for a film test the next day. Jack Warner said, 'She'll never be a star.' As soon as I got back to New York, a man named Hal Wallis called. I tested for him in New York. "Martha Ivers" was my second film for him."

"Hal Wallis moved from Warners to Paramount and set up his production company there. I was part of his colony." 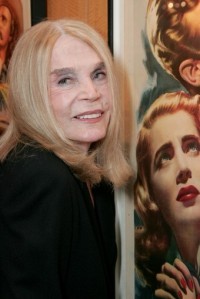 Still a long haired blonde beauty, Scott admits: "I love film. I didn't think I'd like it because I wanted to be a great stage actress like [Katharine] Cornell."

"[In "Martha Ivers"] I had only one small scene with Barbara Stanwyck. [In it,] we both desire the same man, Van Heflin. He was kind, generous, and sweet to me. As for Kirk Douglas, we got along smashingly. As for my director [Lewis Milestone], I fell in love with him, though not overtly. I fell in love with every director. Your emotions are so involved..." she remembered.

Asked about her throaty voice, Scott credited her mother, who "enrolled me in elocution lessons since I was ten years old."

The wonderful conceit of the series line-up is that it salutes screenwriters. Says Academy film programmer Randy Haberkamp: "When we looked at the [Oscar] nominations in the 1940s it became really clear that the majority of nominations were for writing. It was those snappy lines that got recognition in their day -- more so than the cinematographers, directors, or actors."

"Some films get better and more relevant with every generation. For some reason, noir has a world view the new generation can relate to. In the age of digital 3-D, I love having black-and-white films reach a new audience."

The remaining schedule screens eight noir classics, all made in the 1940s, two of which are not available on dvd ("Dark Mirror" and "Black Dahlia"). Screenings are paired with the 1941 serial of "The Adventures of Captain Marvel," a cartoon, and an intro by a contemporary, noir-influenced screenwriter.

The Academy of Motion Picture Arts & Sciences is at 8949 Wilshire Boulevard in Beverly Hills, California. Screenings are at 7 pm. All information is here.