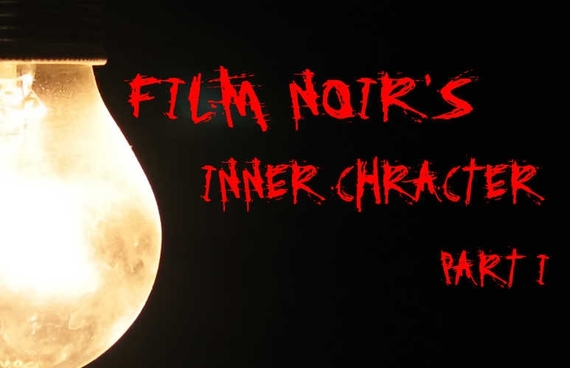 Film Noir, a particular genre of movie storytelling, wasn't given its label until the 1970s. Before then these types of films were merely referred to as melodramas. Enough time and distance finally passed so these movies could be looked upon as primarily very much a particular style, of presentation, low lighting, shadows, and desperate, shifty players, who were always of questionable character. The unique lighting was derived from the German Expressionists whose primary timeframe was pre-World War II, 1930s.

The need to label this particular style, most dominant from 1940 to 1958, was born out of the second Golden Age of film making. In the first Golden Age, the 1930s, filmmakers were still experimenting with the new art form and it was too soon to label films with anything too exotic. All they had then were westerns, war pictures, prison pictures, and so forth. They used simple, clear labels.

Jerry Lewis, after making so many movies it gave him a heart attack, wrote a tome, The Total Film-maker, which became the dog eared Bible of George Lucas, Francis Ford Coppola, Martin Scorsese, and the rest of the bearded, film school wunderkinds of the 1970s Golden age. Lewis, as their mentor, made them extremely aware they were creating art and with every frame there was potential for great technique and meaning.

As a result, film criticism itself blasted off like it was the space program and many new film terms were adopted. No splice of film went unexamined after the 1970s when these very self-aware directors started putting out their fare. Film school enrollment exploded with both the filmmakers and their film critic classmates expounding on their products.

What was written about film noir in the 1970s was definitive and important. Twenty plus odd years of aesthetic distance helped film historians identify, clarify, and most importantly, label film noir with a name.

More labels came after. Everything after 1958 is considered neo noir, especially if filmed in color. Film soleil is film noir with sunshine. The consensus that film noir is mostly about the technical style continues to dominate analysis of the genre and much has been written about the darkness of the characters as well. Yet there is more. So much more this period of this particular film genre says about history and says about, not just our society, but how we as individuals feel on the inside and how we may choose to live our very lives.

What we may have missed out on in the excitement of being in the middle of viewing new creations being released into theaters firsthand, like in the 40s and 50s. Or even what we may have missed by not being in the throes of labeling an art that had been around for a while, like in the 70s, we can make up for by having the longitudinal insight to be able to see what was really going on in America in a collective sub consciousness way. Also to see how those things were expressed through this fascinating movie genre.

The year the American public was the most insatiable in its appetite to consume film noir movies was 1946. One might ask why 1946? The answer could be World War II ended in 1945 and there was right after a deliberate plan to put America back into place. Primarily that core of American Society, which is very backbone the American Family.

Rosie the Riveter had to give her job to a man. Get out of the factory. Put on an apron and go back into the kitchen. If she didn't, the man would not be the head of the family. The hierarchy of the family would be askew. Society as a whole then would be messed up. The sky would eventually fall. Many, many movies were made in the second half of the 1940s that sent the not so subtle message that women needed to buckle under and let the father dictate the future of the family...or there might be no family. If there was no family then there would be no society, and then no America and so then why was the war fought?

Much has been written about Meet me in St. Louis, in particular as a proclaimer of this very agenda. If the American family was not restored to the pinnacle of its idealized form, how could we justify all that was sacrificed in fighting for our freedom and the freedom of our nation's friends?

However, the passion for film noir represents that deep down much of America wasn't buying it. We were attacked at Pearl Harbor, which finally brought the United States into the war. We were going to be warriors, and supporters of warriors. We had to find our dark sides where we were selfish, driven, ambitious, strategic and most importantly...killers. We, as a nation, had to find our inner film noir character in order to go to war. We had to go dark, black even, become comfortable in the shadows, tighten our lips or ships would sink. We had to learn to sacrifice and be stingy. And we did it.

Then we won the war and the message was then about getting back to normal. But what was normal? The Great Depression that preceded the war -where the heads of households had trouble leading because they couldn't be breadwinners? Plus, we had been to war or seen the pictures and films of war like never before. The devastation, the killing, the hunger - starvation even - and torture.

No. Americans couldn't flip flop that easily. Their hearts well knew the darkness and the splintering of the family over great distances. They knew they were supposed to want things bright and shiny, yet they flocked in droves to the movie theaters to see the dark seamy sides of life they had been living themselves for years during the war. They had been living film noir. The films could not be produced fast enough to keep up with demand.

The production of film noir movies and its popularity continued through the 1950s. Forces in the culture increasingly put continued pressure on the creation of an idealized rigid family structure - a structure so stultifying, the only release from it could be gained by watching very selfish people walking around in the shadows on the big screen, while the consumer themselves sat in a darkened movie theater.

The American family had to have a father who had the last word on everything, a subdued housewife/mother, obedient children, all living in cookie cutter neighborhoods in the suburbs because America went to war to protect that perceived way of life - even though it didn't exactly exist beforehand. Having actually been film noir characters during the war, having had to be so dark, needed justification.

And besides it felt cool to be legitimately bad.

ABOUT THE AUTHOR: Novelist, screenwriter, and television personality, Paul Bishop spent 35 years with the Los Angeles Police Department, where he was twice honored as Detective of the Year. He continues to work privately as an expert in deception and interrogation. His fifteen novels include five in his LAPD Homicide Detective Fey Croaker series. His latest novel, Lie Catchers, begins a new series featuring LAPD interrogators Ray Pagan and Calamity Jane Randall.
WEBSITE TWITTER FACEBOOK AMAZON