It has been nine-plus years, one thousand-plus Americans killed and $250-plus billion treasury spent. How are we doing in Afghanistan?

Well, the Afghan government remains corrupt and riddled with cronyism. The economy is dismal, except for leading the world in opium and hashish production -- not the same as leading the world in Olympic Gold and Silver. The Afghan security forces are ineffective, except when fleecing for bribes. How are we doing? How about F-Minus?

Yet, for years Iraq was also a disaster and most of us insisted the country would remain forever F-Minus. Although Iraq is not in good shape, and tomorrow it may slip back into bloody mayhem, today it's certainly not F-Minus.

There were events happening in Iraq that were not being reported, trends unfolding that were off the media's radar screen. In short, this: regular Sunnis had grown disgusted with being blown to smithereens by fellow Sunni insurgents and Shia insurgents had enough of dying for national power that the political system would eventually bestow upon them. And things changed in Iraq.

The crucial changes were not on the battlefield, not the surge of U.S. combat troops, not the endless political maneuvers in Baghdad, but what was happening with ordinary Iraqis. This spurred their tribal and religious leaders to partner with U.S. military advisers to organize and equip Iraqi security forces -- police, paramilitary, army -- that led to a degree of stability in Iraq. And Iraq slowly moved out of the abyss of the F-Minus world. 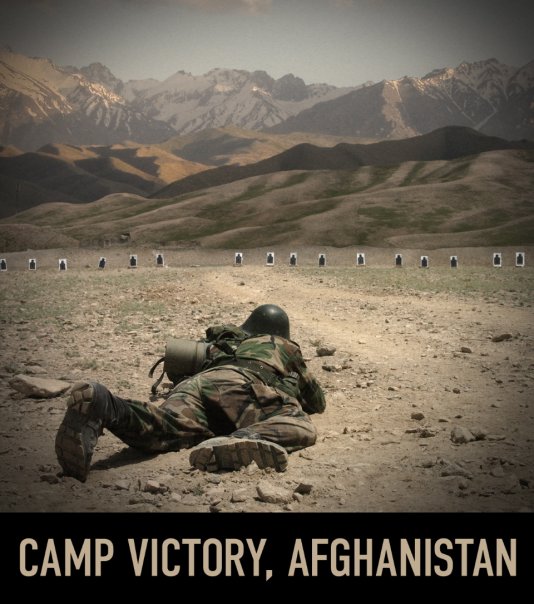 Meanwhile, in Afghanistan the media coverage remains focused on combat operations and political maneuvers while the single most important sector -- crucial for moving Afghanistan out of its catastrophe -- has been one of the most unreported. Until now! Until the premier at the South By Southwest Film Festival of Camp Victory, Afghanistan.

Assembled from nearly 300 hours of verité footage shot over 5 years, this is the first on the ground film to examine U.S. military advisers partnering with Afghan officers to build a professional Afghan military. The first step in Afghanistan dragging itself out of the F-Minus.

At a Camp Victory in western Afghanistan we see uneasy young Afghan recruits, nearly all illiterate and impoverished, volunteering not out of national patriotism but for the money ($66 a month). Afghan commanders and officers talk disparagingly about the recruits and the Afghan people. Yet, they are also committed to bringing peace to their war-exhausted country. U.S. military advisers -- National Guard troops from Vermont and New Jersey -- arrive full of enthusiasm and optimism but leave frustrated if not pessimistic. Afghanistan has a long history of being a graveyard for foreign idealism.

The directorship debut of veteran film editor Carol Dysinger, Camp Victory, Afghanistan is an intimate, realistic account of nearly continuous cultural and professional conflicts between the Afghans and Americans. While lack of trust runs strong, stronger are the tight emotional bonds formed between the Afghans and Americans. Being an adviser to the Afghan Army requires patience, maturity, and realistic expectations, which is why young soldiers need not apply. Being an adviser in Afghanistan is probably the most frustrating and the most rewarding job in the U.S military.

Filmmaker Carol Dysinger does not stop with this up-close view of U.S. advisers and Afghan solders, she weaves in and reveals the larger context of this country in constant war for three decades. Afghans discuss the Soviet invasion and subsequent war with the Mujahedeen, the Soviet Army's withdrawal that ushered in the Afghan Civil War that was eventually won by the Taliban, and today the Afghan warlords play both ends of the stick. And the NATO and U.S. coalition effort, which does not operate smoothly. There are too many commands, too many separate militaries, too many different plans, and too many change of commands. It's another level of frustration.

But this is a story that will not continue forever, not for the United States. President Obama has declared that in July of 2011, "our troops will begin to come home." The pace of withdrawal will depend on conditions on the ground, but next summer, U.S. troops will begin to leave Afghanistan. The clock is ticking.

This is not, however, a surprise to the Taliban. Interestingly, Camp Victory, Afghanistan opens with this Taliban proverb: "You have the clocks. We have the time."

If America is to leave anything behind in Afghanistan besides failed promises, it will be the foundation for a professional Afghan Army. Turning a tribal society into a nation state with an efficient national government takes generations, and transforming a primitive economy into a semi-modern economy takes the same: generations. Erecting the foundation of a national army, one capable of imposing a degree of security, can be realized relatively quickly. As this documentary highlights, the task is a challenge at every step, but progress is possible. And a degree of security can allow, as we see now in Iraq, allowing for the evolution of a functioning government and for an uptick of the economy.

If you watch only one film on Afghanistan, make it Camp Victory, Afghanistan. You will have a front row seat for the most crucial U.S. military mission in Afghanistan and you will have a back row seat to view the big picture of this crucial mission in one of the most failed societies in the world. But you will also be running up and down the steps of emotions, feeling the frustration of the task and then feeling the intensity of the camaraderie. Finally, you will be watching our only Exit Strategy in this theater of war that is not a F-Minus. But remember, the clock is ticking.