Seldom in the struggle for civil rights has one routine action, one police raid, set off a fire-storm that exploded into a major social movement.

Of course there were roots to this explosion, there are always roots. In this case the roots were painful and ran deep. The roots of humiliation and physical abuse and the sense of injustice. The routine police raid sparked these painful roots, roots that quickly flamed into the birth to the gay rights movement. 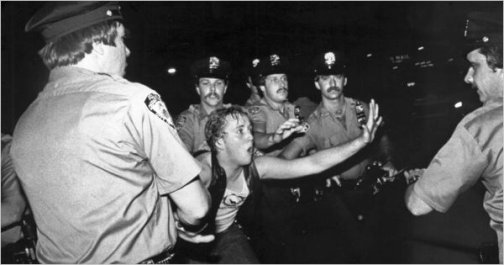 Stonewall Uprising is a solid documentary with critically important information. Entertaining, seamless, engaging, a clear narrative delivering a history few Americans know about, or at least know much about. Interestingly, it took 41 years for this the first non-fiction film to examine the innocuous raid that flared into a riot and ignited a revolution and was told from the perspective of the participants themselves. It's a fascinating story. A story about American freedom told by those who fought for their freedom.

In the early morning hours of June 28, 1969, eight members of the New York Police Department's Morals Squad set out to bust a Greenwich Village gay bar. The bar selected had been raided before: the seedy yet popular Stonewall Inn on Christopher Street in the heart of New York's gay community. The police would close the establishment, yet it would soon reopen. That was the pattern in New York City then. The gay patrons would complain but not resist, there would not be any serious problem. For the police, it was just another hot and humid June night with the closing of a gay bar. This time, however, the gay patrons did fight back. For three nights there were riots at the bar.

Stonewall Uprising weaves interviews of gay bar patrons and the policeman who headed the Moral Squad and two Village Voice reporters who were at the riots. What propels Stonewall Uprising above most historical documentaries is not so much the narrative -- which gives an excellent blow-by-blow description from participants on both sides -- but the inclusion of the historical context.

This context enables us to understand the why. We hear about the pain of living as a gay person in the 1960s, the disrespect, the maltreatment, and always the sense of being denied their rights. "It's very American to say, this is not right," says Stonewall rioter Virginia Appuzo. "It's very American to say, you promised equality, you promised freedom. And in a sense the Stonewall riots said deliver on the promise."

Greenwich Village in the 1960s had a bohemian tolerance for gays and lesbians, and therefore had become a magnet for those fleeing an increasingly rigid and anti-"faggot" America. By 1969, the gay life style was very visible on the streets of Greenwich Village and in numerous of bars. Although a sanctuary -- New York City likes to think of itself as a island off the coast of America -- America's long hand of intolerance and persecution reached into the city. This was especially true when elections were approaching, and on June 28, 1969, the mayoral election was approaching. The Morals Squad had increased their raids on gay bars and then the explosion at Stonewall.

Filmmakers Kate Davis and David Heibroner have filled a cinematic void ignored too long. Much more needs to be told about the Stonewall riots, and aftermath, yet as the first film to give voice to those who started the gay rights movement, it is an excellent step to flushing out a story that has hid in the recesses of American history. Those early morning hours pushed aside the ugly and embarrassing fact that gay and lesbian America were not willing to fight for its freedom. That will never happen again. Today, with the battle over marriage raging, they are fighting, and know they can win this battle as they won the battle at Stonewall.

A glorious story told by the warriors themselves, the Stonewall riots were a major turning point in American history. "This was the Rosa Parks moment," writer Lucian Truscott says in the film, "the time that gay people stood up and said no." Four decades later, Kate Davis and David Heibroner have brought the Stonewall moment alive with clarity and passion.