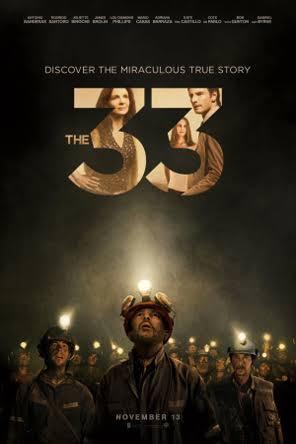 I haven't been held in such suspense since I jumped the Corinth canal only to have my bungee snap off; The 33 showcases the human condition in all its complexities.

In 2010, 33 miners in Chile were buried alive by a mine explosion and left with only three days of food to survive. It would take 69 days and an international effort to bring all 33 miners to safety and above ground. How did they survive? And what can audiences learn from their decision to persevere against all odds.

200 stories beneath ground level with their only exit blocked by a boulder twice the mass of the empire state building, the miners mobilized in ways that would stun and magnetize viewers globally. The story of the explosion serves as a backdrop to introduce the based on real life 33 miners who were sent by a mining company to collect gold and copper in a mine they had been forewarned was fatally unstable.

What do you do when faced with the decision to trust your instincts and throw your family into financial jeopardy or lead a team with which you've worked for years into a place while dangerous had become a daily happenstance? The decision however unclear in its repercussions like many decision had a time line one that would elapse and serve as a precursor to one of the most publicized mining disasters in recent history.

The stories of the miners both collectively and individually centers on decision-making. Faced with hard choices where not to act is an act in itself, each miner would play a role in deciding not only their own fate but also the collective fate of the thirty-three and indirectly the fate of Chile's political regime.

The international cast is led by

and Lou Diamond Phillips, with