The Belgian filmmaking brother duo of Jean-Pierre and Luc Dardenne has been making documentary and social-realist fiction films since the late-1970s. While their gritty humanist features have gained praise in the independent film world internationally (twice winning the Palme d'Or prize at Cannes, a feat only accomplished by five other filmmakers), they remain relatively unknown in the United States.

This will hopefully change with the inclusion of an A-list actress in their powerfully heartfelt new film "Two Days, One Night."

Marion Cotillard plays Sandra, a working-class mother coming back to her job at a solar-panel plant after suffering a bout of clinical depression. Company management sees an opportunity to eliminate her position days before she is to return. They offer her co-workers a loaded choice: either rehire Sandra or receive an annual bonus of 1,000 euros. 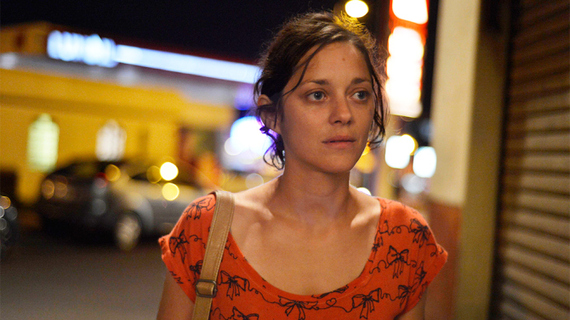 Sandra only has the weekend to reverse an initial vote in favor of the bonuses in order to save her job and prevent her family from returning to public housing. The film centers on her quest in the small Belgium town to ask for support from her 16 fellow workers, many whom she barely seems to know.

Each scene presents a tense ethical dilemma, both for Sandra seeking some sympathy and kindness, and her co-workers who are also on the edge with real money needs. The Dardennes offer a fascinating glimpse of the human face when confronted up-close with a moral choice between compassion and self-interest.

Some colleagues are openly hostile for being asked to give up money. One fellow worker simply breaks down in shame for initially voting for his bonus, and asks Sandra for forgiveness. Another merely rationalizes his choice: "I did not vote against you, I voted for my bonus." 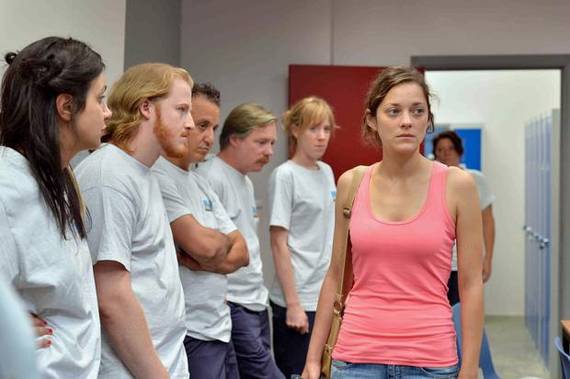 Sandra perseveres through an emotional rollercoaster, gaining confidence and hope, and then relapsing into self-doubt. Tight, documentary-style camerawork carries viewers into the vortex of her journey.

The film is anchored by a naturally rendered performance from Cotillard, who is in every scene, walking suburban streets in jeans and color tank tops with weighted shoulders, searching for signs of human affirmation. At one point, losing hope, she tells her steadily encouraging husband Manu (tenderly played by Fabrizio Rongione), "I do not exist."

Some have compared the film to 12 Angry Men, which is apt. I kept thinking of Bicycle Thieves, and the desperate face of the poor father walking the streets of post-World War II Rome seeking to recover his stolen source of a scarce livelihood.

Two Days, One Night is also implicitly a commentary about the fear and violence a company can inflict on workers, and how economic dislocation is absorbed into personal shame and emptiness, splintering psyches and shattering families.

The Dardennes' dramatic pacing and intimate human touches make this film far from a downer. The emotional pay-offs are quietly understated in the contours of empathic faces, notably in car scenes between Sandra and her husband, and when a co-worker joins them to joyously sing Van Morrison's Gloria.

Ultimately, Two Days, One Night is a testament to preserving one's dignity when living on the edge, and the invisible bonds and benefits of human solidarity.

(Two Days, One Night premiered at the Telluride Film Festival last month, and will be screened at the New York and Mill Valley film festivals in October. Sundance Selects will release the film later this year.)