When people think of film school curriculum, they don't usually think of cutting edge scientific collaborations with NASA and space launch experiments, but then again, New York Film Academy's Rajiv Uttamchandani is not your typical instructor. An astrophysicist of Indian descent who believes that science can better approach problems with a more creative mindset, Uttamchandani is taking his students on a journey where no film school students have gone before.

On Easter Sunday of this year, Uttamchandani and his students launched two weather balloons (in collaboration with California State University, Northridge) containing seven GoPro Hero3 cameras set to capture ultra high-resolution images in both the visible and IR spectrum of light to get a precise idea of the topographical changes of vegetation in the Tehachapi mountain peaks of the Central California desert, as compared with data obtained under the U.S. Geological Survey over the past six decades. Detailed studies of these changes may help us understand how global climate change is affecting moisture content and vegetation in Southern California. Reaching altitudes of approximately 90,000 feet, the balloons traveled a linear distance of 35 miles, eventually landing in the Mojave Desert. Also included was a special tracking devices to provide data on not only the balloon's position with time, but also important external factors in the Earth's upper atmosphere such as wind direction, relative humidity, pressure, and temperature.

The goal was two-fold: to instill in students a deeper appreciation and beauty of our planet, and to conduct cutting edge research on the effects of global climate change on our local environment. It's exciting to teach science in a film school because science can benefit film, and film can benefit science by communicating to an audience comprised of nonspecialists. Right now, we are also exploring possibilities to develop a series of videos created by the NYFA students that explain crucial concepts in science and astronomy to non-specialists. Why not merge the sciences and the arts in ways that will hopefully benefit, and change, the course of humanity. Ambitious? Idealistic? Sure. Necessary? Absolutely!

In addition, Uttamchandani is spearheading a collaboration between the New York Film Academy, NASA, the Jet Propulsion Laboratory (JPL), and Northrop Grumman, to create a series of Public Service Announcements that will greatly increase the public's awareness of the James Webb Space Telescope (JWST).

This telescope is undoubtedly one of the most significant scientific ventures humankind has embarked upon. Costing upwards of $8.8 billion, and in the making for nearly twenty years, this telescope will be launched sometime in 2018 and will enable us to peer ever further into the birth of the universe. We will be able to see the birth of the first stars, the formation of the first galaxies, and even be able to characterize atmospheres of exoplanets to detect possible signs of life. And as of yet, most of the general populace is unaware of this magnificent, and historic, undertaking. We want to change that.

As Director of STEAM (Science, Technology, Engineering, Arts, and Mathematics) Education Initiatives, Uttamchandani's overall goals is to merge the Arts and the STEM fields into one cohesive unit of education. Projects on the horizon include working with NYFA's animation team to help visualize JWST's ability with the characterization of exoplanets, and a collaboration with Radiant Zemax LLC, a company that manufactures an extremely sophisticated lens design software, OpticStudio 14, used in his classes to teach the fundamentals of lenses and optics to cinematographers.

I want to give my students the opportunity to truly appreciate the sciences - not just inside a classroom through a lecture, but to actually experience it. Several of our filmmaking students recently went to Tufts University in Boston to document their Center for Engineering Education and Outreach (CEEO) department, and the results were remarkable. It is this kind of project based learning, where visual artists are given the opportunity to learn more about STEM fields in the context of what they love doing - telling stories. And the only way for students to truly understand this, is to experience it outside of a classroom. We want to use our students' talents, and the power of the visual media to not just tell, for example, the story of the James Webb Space Telescope, but on a greater level to show what we know about our universe, what we are able to do, and what it means to be human. 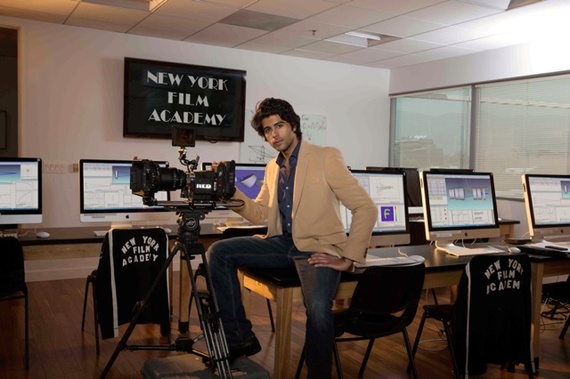