Port-au-Prince, Haiti. The film "Thirty-Five Long Seconds: Haiti's Deadly Earthquake" was screened recently as part of the recent Donor's Conference at the United Nations. The conference, entitled Towards a New Future in Haiti, was hosted by Haitian President Rene Preval, U.S. Secretary of State Hillary Clinton, and U.N. Special Envoy for Haiti Bill Clinton. Pledges from the conference totaled almost $10 billion in immediate and long-term aid to help Haiti recover. Secretary-General Ban Ki-moon opened the conference by calling for total reconstruction of the beleaguered nation. 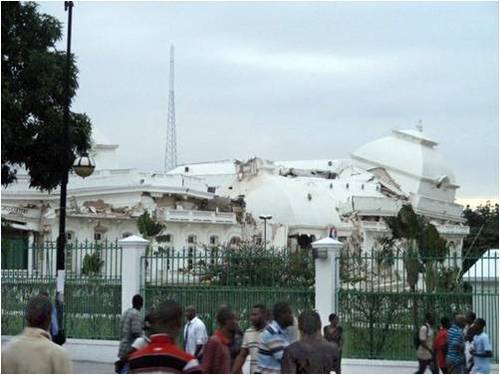 The Presidential Palace in Port-au-Prince after the January 12th earthquake.

On January 12, 2010, Haiti was for all practical purposes destroyed. Haiti's National Palace in Port-au-Prince was severely damaged by the magnitude 7.0 earthquake centered about ten miles away in Leogane. Twelve security cameras caught the human drama as staff tried to escape the doomed structure. Like rats in a maze, the panicked men and women searched for an escape, hitting blocked hallways again and again. Many were crushed to death. The 17 minute video may be viewed here.

I interviewed the film's soft spoken producer, Mario L. Delatour, the day of the U.N. Donor Conference, on an airplane en route to New York. "We had discovered rare security videos of the opulent National Palace in self-destruction mode, and I used this as a microcosm of the utter destruction of the nation," Mario told me. Mario wrote and narrated the riveting film.

President Rene Preval and his wife Elisabeth Delatour Preval were interviewed for Mario's film. The president explains their close brush with death. They had left the National Palace at 4:45 in the afternoon to attend the 150th anniversary ceremony of the Haitian School of Law. The brutal earthquake struck at 4:50. 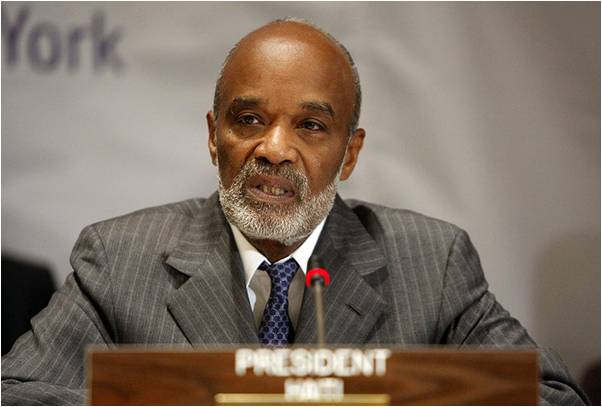 Haiti's President and First Lady had left the National Palace minutes before it collapsed.

The collapsed cupola on top of the Palace has become a symbol of devastated Haiti. The second floor of the grand building collapsed almost completely, taking the attic floor with it. The Palace's columned central pavilion, a section containing the main hall and primary staircase, was entirely demolished. 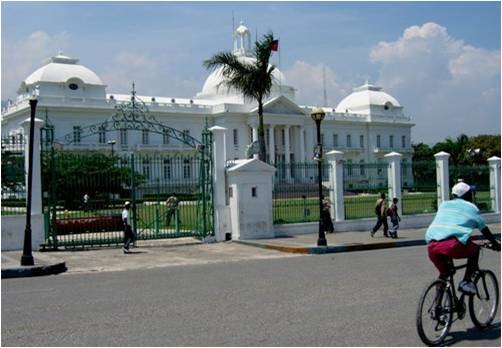 The opulent Presidential Palace before the January 12th earthquake facing Place L'Ouverture near the Champs de Mars in Port-au-Prince.

Although difficult to imagine, Haiti lost in less than a minute their National Legislature and Departments of Education, Health, Finance, Justice, and Culture. The offices of the National Police and Army collapsed. All paper records for the entire nation were destroyed. It was as if Washington, D.C. had been hit by a nuclear bomb.

250,000 buildings pancaked in Port-au-Prince alone, including 25,000 commercial buildings. The quake was a blow to Haiti's private sector, with most businesses lost, inventory destroyed, and the economy demolished. Overnight, Haiti lost 80% of its gross national product which was the lowest in the Western Hemisphere to begin with.

The total value of damage and losses sustained has been calculated at approximately $7 billion, according to the U.N. Development Programme (UNDP).

Education was particularly hard hit and in Mario's film, the First Lady calls upon the international community to specifically target rebuilding Haiti's educational system. Schooling in Haiti was insufficient before the disaster. In Port-au-Prince, it is estimated that the death toll included more than 4,000 students, 500 teachers, and 200 staff from the Educational Ministry.

The Donor Conference at the United Nations in New York, where the film "Thirty-Five Long Seconds: Haiti's Deadly Earthquake" premiered, seems to have been a success -- if promises made there are fulfilled.

The U.N. conference was co-chaired by Brazil, Canada, the European Union, France, and Spain as leading donors to Haiti, which was already the poorest nation in the Western Hemisphere before the disaster. 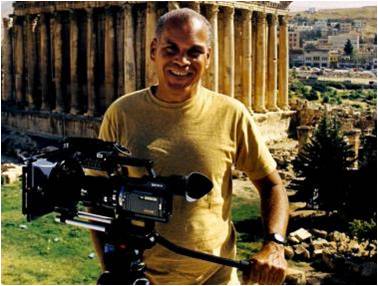 I believe Mario's film touched the hearts of those at the conference who viewed it. The piece truly captures the intensity of the disaster. Returning myself from a mission to Haiti, where the majority of the homes have just been left where they collapsed and 90% of the nation is sleeping in tents, I have seen for myself what the video portrays.

It was one of the deadliest earthquakes of all times, leaving in the capital alone 350,000 wounded, 1.5 million homeless, and 4,000 people amputees. The closest I have ever seen to this utter devastation is witnessing the destruction of post-Tsunami Indonesia and Sri Lanka.

Because two-thirds of Haiti is mountainous, the population there is denser than India or China. Environmental problems and overpopulation plague the nation, making reconstruction efforts there more difficult.

Helen Clark said at the U.N. conference that the pledged funds "will pave the way for building back better in Haiti. With sufficient resources, the vision presented today by the Government of Haiti on behalf of Haitian people can become reality." I hope this occurs.

I interviewed the American Ambassador to Haiti, Kenneth H. Merten, on the same flight. He was adamant that the U.S. response would be to assist President Preval and the people of Haiti in reconstructing the nation, taking our lead from the Haitian Government. I was impressed with his grasp of Haiti and sensitivity to the myriad issues involved.

Mario's film was commissioned by Haiti's Interim Commission for Reconstruction. This moving drama features President Preval speaking in French with sub-titles, with his wife the First Lady speaking in English. The President states in the film his desire to facilitate the decentralization of Haiti, making the surrounding cities of Leogane, Gonaives, Cap Haitian, and Jacmel more attractive to the residents of Port-au-Prince.

"The Haitian people are strong, and they have survived centuries of adversity. Under the President's direction, Haitians will rebuild the city and take their place again in the world community," Mario told me.

Using the National Palace as its theme, the film is particularly effective as the history of the building is so reflective of the nation's cycles of violence and suffering. The recently destroyed Palace replaced the former Palace which was also destroyed. The former Palace collapsed when a neighboring ammunitions depot blew up, killing the sitting president.

In 1912 Haiti held a contest to build the new Palace, and the classical design of a leading Haitian architect who graduated from the Ecole d'Architecture in Paris came in second. Haiti could not afford to build the first place winner, so construction began on the second plan. In 1915 the under-construction Palace was set ablaze in a riot that ousted and assassinated the president, a move that led to U.S. occupation. American forces took possession of the Palace and U. S. engineers oversaw its completion in 1920. It was more than twice the size of the White House.

Made of white-painted reinforced concrete, the recently destroyed National Palace was a two-story building with a central section featuring a domed entrance pavilion whose four Ionic columns supported a portico. At either end of the main facade were matching domed pavilions. Built in the shape of the letter E, the three wings ran back from the front. France has offered to rebuild the presidential palace.

I heartily commend Mario L. Delatour on his successful film, "Thirty-Five Long Seconds: Haiti's Deadly Earthquake." It is inspiring to see a documentary film capture so well and with such respect an enormous national tragedy. In addition to a talented film producer, Mario is both a thought leader and global citizen of the highest order.

Other Stories by/with Jim Luce about Reconstruction in Haiti

Airplane Interview with the American Ambassador to Haiti (Huffington Post)

Inside the Shantytowns at Haiti's Ground Zero (Daily Kos)