It is a shocking film: Ossama Mohammed and Wiam Simav Bedixan's Silvered Water, Syria Self-Portrait, featuring the footage of the ongoing killing going on in Syria, filmed by the people struck by and in the middle of the violence, on their cell-phones. Director Ossama Mohammed told his public at the Lisbon-Estoril Film Festival, where his film screened in Competition last week, that he wanted to testify to the beautiful perseverance of the human being to record experience. Even though the cell-phone videos (and the video-cam clips of Wiam Simav Bedirxan, Mohammed's collaborator, who courageously filmed the siege of Homs), are of suffering and death, they are still, he told us, "artistic work, cinematic."

Yet what we see in the clips is not beautiful. Silvered Water begins with a baby's umbilical cord being cut, suggesting that this new human being has no idea what horrors await him or her. The horrors include cadavers of children in the streets; a teenager being tortured in prison, a little boy kissing his dead father's bruised face; a maimed cat limping about Homs without an eyeball.

Throughout, we never lose sight of the fact that these are amateur on-site videos taken at the scene of the crime. The camera spins; the images of a crowd rushing away from snipers blur as the cell phone video shakes -- since the owner is running for his life towards a truck.

Expressionist shots of "red" and "white" interrupt the footage. The red blood on the street; the white sky. "How do you say white in Kurdish?" the narrator asks his Kurdish collaborator. "How do you say red?" These images seem deliberately poetic, a modernist meditation on loss. Adding to the aesthetics of this film, we have the haunting strains of music from singer Noma Omran, who sings operatic dirges during some of the most devastating scenes.

In making these choices, Mohammed is calling attention to the film as a constructed artifact: to the fact that what we are seeing is not just what it is in the images, but the process of shooting itself. The narrator of the film intermittently intercedes to comment on the act of filming. "What is beauty?" "What is cinema?" "Cinema of the real." The voice pauses. "Cinema of the murderer. Cinema of the victim." The cinema question runs as a thread throughout. One of the stories of death told in this film is of a young man who dreamed of starting a cinema club in his home town of Douma. He succeeded in his dream. In the heart of his war-torn town, he screened the film "Hiroshima Mon Amour." Then he too was killed.

At the end, the camera pans to a pure blue sky: that which hovers over everything, beyond human touch and contamination.

A French filmmaker sitting next to me found the documentary difficult to bear -- and "problematic". The problem, I imagined, is that the lofty philosophical questions of "what is art", "what is self-expression," "what is cinema" hover over images of actual people suffering.

I asked the director, a Syrian in exile in Paris, why it was that he erased the context of politics from his film. We never are given any information about the situation in Syria: why it is happening, why it is not stopping. Nor do we ever learn the full story of who these victims are. Who was that teenaged boy who was tortured and forced to kiss his torturer's boot? Who was that dead father bobbing in a casket on the truck? 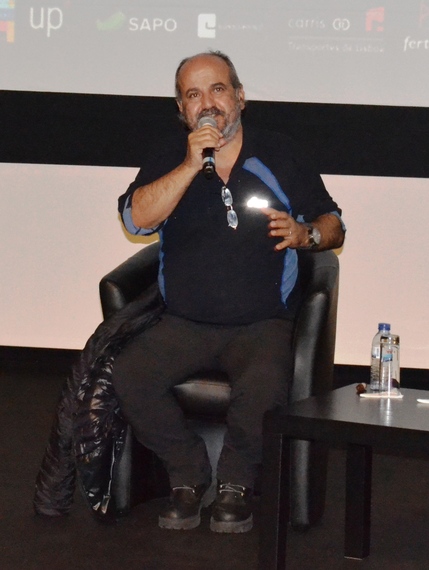 As for the metaphysical questions, on art, on beauty: the director explained that his film celebrates the human capacity for self-expression and dignity, despite all.

"Did you see the scene where the crowd ties a rope on a dead body, and does everything to 'save it' and bring it to a truck? This sequence for me has a title: The Society of Dead Poets. Syria is the society of dead poets. When people were trying to save the dead body, I can say that it is very beautiful. Why? That man who died was just trying to get bread for his children. Snipers were trying to kill anyone who got this body. Those people were sacrificing themselves to save a dead body! To bring back human value. This is where poesy comes from."

The images in this film, for Mohammed, also partake in poetry.

Great photography begins when the feelings of individuals come through the images. This is real cinema. Cinema is not describing; it is not making a landscape; it's not stereotyped beauty; it is not a sunset. Cinema is any moment when a deep and personal feeling participates in the image. These people were not thinking academically about framing, but they were choosing what to film: creating composition. I started with high respect with these images [which Syrians had emailed to him]. I saw inside these images the real work of art. Syria is building her portrait; it is Syria filming herself. I canceled language; I had the rushes of a very big film, filmed by 1001 unknown people.

He passionately lauded the poetic impulse witnessed in his film:

I believe in the depth of the Syrian moment in 2011; it was poetic. I deeply believe this. I did not look at it as brutal. Everything is coming from the fountain of the first moment of this film, from the birth of this child, from the man who says I don't know how to film, from people saying freedom. Just listening to the deepness of nature; listening to the sounds and images: this can be poetry.

The philosophical aesthetic issues of self-expression and cinema that Mohammed raises are brilliantly provocative. The clips, as he states, do "save the beauty of the people in these horrible moments." Still I find it difficult, even now, to resolve the dissonance between these philosophical questions and the cruel images that remain in my mind (one jury member admitted to me she watched the entire film with her "eyes closed" because she wanted none of the images indelibly set in her memory).

Still I am thankful to have seen the film: that these 1001 people's clips, because of Mohammed's efforts, did make it to a big screen.

As several people in the audience noted: when we see these same videos on television news or on YouTube, in snippets, we are numbed. When we see them all together, in one narrative collage, without interruption, the horror is beyond comprehension.