YOU CAN DO SOMETHING ABOUT IT is a series of frank interviews with passionate men and women who are leaders, activists and influencers on the subject of gun violence in America. Some have been my teachers, champions and support system on this very complicated and emotional journey and some I have admired from afar for their bravery, audacity and indomitable commitment to the cause. Although our backgrounds, experiences and the challenges we face in our work are as complex as the causes and the solutions to this epidemic, all have shown that there is more that can be done to end this senseless loss of human life.
I am proud to introduce you to each of them and excited to share their insights into how all of us can be a part of the solution to "Raise The Caliber" of our communities. 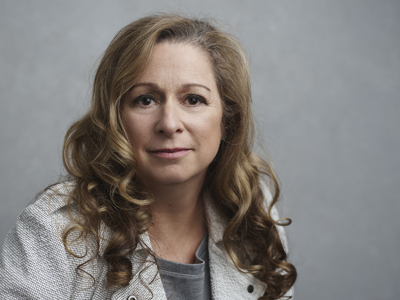 Where do you live? New York City

What quote do you live by?
The more we sweat in peace the less we bleed in war. --Vijaya Lakshmi Pandit

What are you most proud of about your work/life?
I am so proud that the films I have made have not only found their way to audiences of all stripes, but that they stand on their own and communicate clearly the very message of peace that I had hoped they would.
That, and my children....

What is the biggest challenge you face in your work?
The challenge is not engaging audiences. Most people love what we make, no matter where they come from or what they thought going in. The challenge is in finding audiences in a very noisy media landscape, and get them to make the effort to gather in critical masses around our important messages.

Why do you think we have such a problem with gun violence in America?
America is not a peaceful country. I wish I could say we are, but we are not. Americans think they live in peace while all around the world, with our permission (even if that permission comes only by default) and with our resources and by way of our proxies, men and women are being killed and maimed in our names. And even when we are not doing the killing, we are supplying those who are with all they need to keep the world unstable. It is therefore, not surprising, given the violence abroad that we seem to think is necessary and inevitable to protect our way of life, that we accept a high rate of violence at home as natural and inevitable. The key to transforming this nation into a peaceful place is to challenge violence locally. We need to challenge the conception of violence as a viable means of resolving conflict and solving problems. We need to develop other, better tools. And we need to make more visible the cost of violence, rather than offer the sanitized and even picturesque version of it that one sees in film, television, video games and even the news. If people really understand what an enormity it is to take even one human life, even when justified in self defense, they'd be less anxious to pick up guns to promote their interests.

What do you think is the biggest misconception about why we have such a problem with gun violence in America?
Grrrrrr. The idea of the Wild West. You hear a lot of nonsense when you go into this country and talk about guns, but this tidbit of gun wisdom is so far off the mark it makes me crazy.
First of all, everything we picture when we think of the "Wild West" comes not from reality, but from movies and TV. It was Hollywood that decided what, where, when and why a cowboy would shoot another human being, and Hollywood's conception of this reality could not be further off base.
"Wild West" towns in fact were zones of strict gun control. Men did not walk the streets with guns strapped to their sides and they certainly did not, at least not often and never without consequences, meet at high noon and fire off six or eight shots in the middle of Main Street.
The town of Tombstone Arizona, in fact, had a sign at the entrance that said "Welcome to Tombstone. Kindly leave your gun with the Sheriff's office." In fact, the famous shootout at the OK corral happened precisely because the Clanton boys refused to disarm, and it was Wyatt Earp's intent to force them to do so. The Tombstone shootout, therefore, isn't a romantic story of men and their weapons, challenging each other over honor and justice in the lawless west. It is the story of gun control, and about how a common sense measure can make a town more civilized, and leads to violence ONLY when flouted.
This idea is especially insidious because it leads to the next bit of craziness often heard in gun culture circles which is that America was forged in violence and that violence is in our very DNA. First of all, what exactly does that mean? How can a behavior be in your DNA? Violence is a decision. Violence does not simply "happen". So saying it is in our DNA is a cop out and a sham.

Do you think there a law that the government could enact that would really make a difference in reducing gun violence and building safe communities?
There are a lot of laws and regulations that will improve our record on guns. Some should be geared toward suicide prevention, some toward holding parents responsible for their kids' getting access to guns, some for holding guns owners responsible for keeping their guns secure from being stolen and sold into black market. But the real change that has to happen won't be legislative or regulatory. The real change has to involve a change in the American mindset. We wouldn't be so far up this creek if we didn't hold guns in the highest esteem. I mean truly we are in love with them. Some of us would have sex with them if we could!! We need to fall out of love with guns, with violence and with aggression. We need to shed the idea that violence is normal and natural and a legitimate way to solve problems. And we need to fall IN love with peace in all its forms. That's the only thing that will materially change this country for the better and for good.

What are three things the average American citizen can do to "Raise The Caliber" of their community?
1. Speak up for peace. When a film relies on violence for entertainment, walk out. When people find a fight or a killing amusing, tell them they should be ashamed of themselves. Peace is an orphan in our country. More people need to step up and defend the idea of it.
2. Join Moms Demand Action or any other activist organization raising the visibility of the MAJORITY of Americans that want gun reform. Make yourself a loud advocate for change.
3. Vote the issue. Don't look the other way when your candidate refuses to walk the walk (I'm talking to YOU Bernie Sanders!!) If they don't pay for their records at the ballot box, then how can we expect anything to change??

Is there a must read book or article on this topic that has educated and inspired you?
Well, there is this film called The Armor of Light. It's on Itunes, and Google Play and Amazon now and will be airing on PBS May 10. I highly recommend it!!

###
Jessica Mindich began the Caliber Collection in January 2012 as a collaboration with the Mayor of Newark, NJ, Cory Booker, as a way to turn illegal and unwanted guns from our cities' streets into jewelry. Their vision was to create a virtuous cycle by funding gun buyback and amnesty programs from the proceeds of the sales from the Caliber Collection. The jewelry is made with the serial numbers from illegal guns and the metal from shell casings. The Caliber Collection donates 20% of the net proceeds to fund voluntary gun buyback and amnesty programs in some of the toughest cities in America. To date, they have taken over 1,000 illegal guns off the streets and have raised over $100,000 for police departments in Newark, Hartford, the San Francisco Bay Area and Detroit from the sale of Caliber products to customers in over 85 countries.
From the success of the Caliber Collection, Jessica created The Caliber Foundation, which offers support to victims, families and communities who have been affected by illegal gun violence. The Caliber Foundation is the proud recipient of grants from MTV, Shepard Fairey/Obey Giant and The Serena Williams Foundation. Jessica is also the founder of the Raise The Caliber initiative, a National advocacy campaign to end illegal gun violence. Proceeds from partnerships under Raise The Caliber are donated to the Caliber Foundation.
Jessica is also a guest editor for the Huffington Post on Crime and a frequent contributor to www.MariaShriver.com
www.calibercollection.com