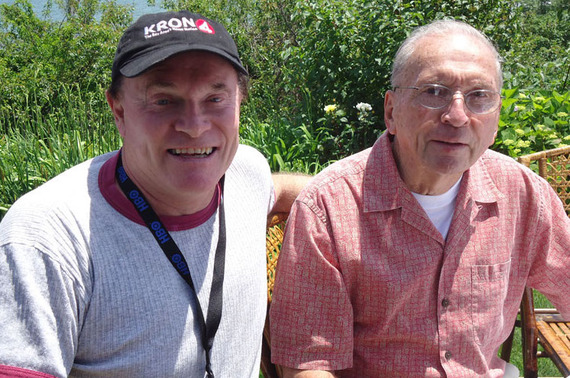 This week I talked with LGBT ally, filmmaker Garry DuFour about his current project Atomic Veterans Speak. From 1942 until 1962 almost 200,000 U.S. soldiers were often unknowingly exposed to different levels of radiation during the testing of atomic and hydrogen weapons. DuFour, a disabled Vietnam veteran living in Vermont is bringing recognition, respect and honor to these heroes who were used as human guinea pigs by the Department of Defense. Out of almost 200,000 U.S. soldiers who witnessed these bomb explosions less than 15 per cent are alive today. Dufour is currently conducting interviews with the survivors of these horrific government experiments whose ages run from the youngest at 79 to those well into their 90's. Garry first learned of these secret to top-secret nuclear experiments when he was a staff member of the U.S. Senate Committee on Veterans' Affairs from 1979 to 1981 when veterans who witnessed several nuclear blasts were coming down with different types of cancers due to radiation poisoning. The Chairman of the Committee, the late Senator Alan Cranston of California was the first Senator to hold hearings about the Atomic Veterans, who they were now known as, to provide health care and compensation for since hardly any records were kept to verify they participated in these secret tests. I talked to Garry about his inspiration for his documentary Atomic Veterans Speak and as a fierce gay ally his spin on our LGBT equality.

When asked what his personal commitment is to LGBT civil rights Dufour stated:

I was a combat Chaplin's assistant in Vietnam, 101st airborne and believe me if you will all types of soldiers and I mean all types would come to our of office. Well the office probably was a bunker way out in Vietnam and talked about to the Chaplin about their problems. And I noticed when you brought up LGBT that out in combat most soldiers don't care about your sexual orientation. The deeper, the hotter combat you were there to work together and the Chaplin and I noticed that. I mean you were out there and we were one solid team. It doesn't matter your sexual orientation or years ago some people would say sexual preference and I came across several not only gay soldiers but bisexual ones and I always thought the military was at least 20% gay, bisexual and the gay soldiers, bisexual and lesbian, they're not only fighting for their country, even if they're stateside but some of them are obviously putting up with harassment right within the ranks. Those soldiers have a lot on their shoulders and they're still doing a darn good job.

Garry DuFour handled correspondence between the government and veterans who were exposed nuclear radiation and fallout from Top Secret experiments conducted by the US Government in the early development of nuclear weapons during WWII. During this time he photocopied many of these letters that explained how these soldiers were used as guinea pigs to see the effects. This information was not released to the public until the Clinton Administration in the mid 1990's. Dufour was also appointed by a federal judge for the Agent Orange Class Action Lawsuit Distribution Plan. Garry has had a unique career ranging from acting in California to reporting for "Stars and Stripes" to multiple positions in the United States Senate. He hopes his documentary Atomic Veterans Speak will honor and recognize these heroes and their families for their service and sacrifice.
For More Info...