Sometimes the answer just falls out of the sky. It's clear and obvious -- maybe standing in front of you. Like, love-at-first-sight.

Six years ago, there was a brief story on local broadcast news about a pelican that had stopped traffic on the Golden Gate Bridge. The bird had settled onto the slow right lane and no matter the blare of horns from approaching traffic or the free advice from nearby pedestrians and cyclists -- the pelican had had enough. 'I'm done.' The police were fast on the scene. The bird resisted just a little in being apprehended, but surrendered under a fluffy blue towel and was then whisked away into custody. Turns out, she was a minor and starving. 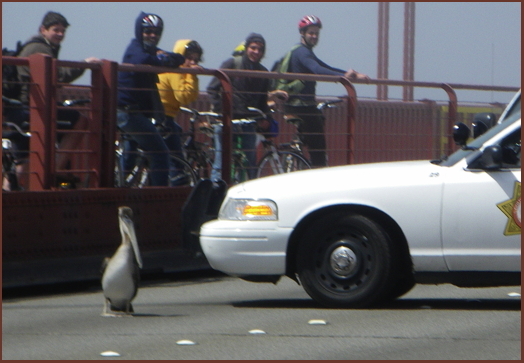 "A friend of mine was in that traffic jam," said filmmaker Judy Irving.

She e-mailed me and said - 'You'll never guess why I was held up in traffic on the bridge today. A pelican landed in the roadway.' I quickly got on the phone and called the Bridge people and tried to find out where they had taken the bird after they arrested her. The film was shot with a little pocket camera or cell phone by two people who were riding their bike across Golden Gate Bridge. My husband [Mark Bittner, star of Judy's award-winning documentary, The Wild Parrots of Telegraph Hill] found it on YouTube. We got in touch with them and they allowed us to use it. It's the title sequence of the movie.

Pelican Dreams unfolds the private lives and public hazards of California brown pelicans. Currently in release, the seventy-nine minute documentary balances the pelicans' intimate exchanges and community interactions, along with thrilling views of California's coastal areas that makes up their habitats. From San Francisco Bay to Morro Bay, the Channel Islands National Park and down into Baja -- Judy Irving's Pelican Dreams is a six-year odyssey of personal challenge, unexpected networking and controlled management of rapidly changing recording devices, filming techniques and media files. 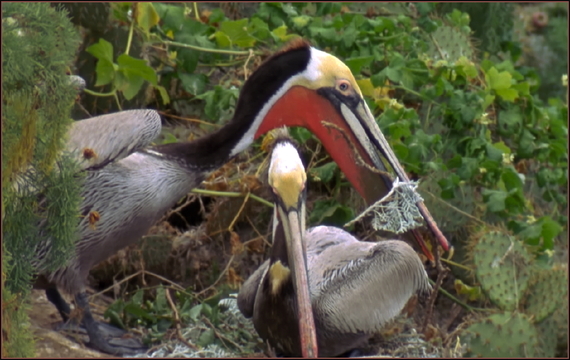 "When I started this movie," said Judy during our recent interview,

I was using sixteen millimeter. I loved it, I was used to it. I had been shooting sixteen millimeter film my entire career. It has deep rich color and it looks fantastic. I shot the entire breeding and nest-building, the little chicks and young birds learning to fly -- all that stuff from the Channel Islands on sixteen millimeter film. That was in 2009. I'm really happy I did that. Even after you transfer it from the negative to HD -- because the film ended up in high definition -- it still looks great and the color is richer than HD-originated footage. Go figure! Then my lab [Monaco] closed here in San Francisco. I had to send the stuff to L.A. I was the last person standing still shooting in sixteen millimeter. It was ridiculous!

In spite of that, the finished look of Pelican Dreams is beautifully consistent. Judy credits the results to her esteemed colorist, Gary Coates, who was able to blend all her various formats, enhance certain images and do color corrections. The music soundtrack, composed and recorded by local Niles Canyon resident Bruce Kaphan, completely supports the dramatic arc of the narrative. Acclaimed sound mixer, Sam Lehmer, corralled the foley, tweaks and tracks into the 5:1 surround mix for the theatrical release and stereo mix for the forthcoming DVD. But our spiritual link to the story begins with "Gigi" -- from the Golden Gate Bridge -- whose little eyes are so helpless and appealing. What follows is an adventure of abundance, care and co-operation which allows Gigi to recover and grow up in -- after all, a most delightful way.

"You should eat!" admonishes Monte Merrick, as Gigi waddles toward a buffet of anchovies. Monte was her caretaker at International Bird Rescue in Fairfield. After determining that she had not been injured, but was very dehydrated and extremely thin, he opens her pouch and pours in a healthy dose of Pedialyte.

I tracked her to Wildcare in San Rafael. I knew about Wildcare because I had once picked up a common murre, another seabird, off the beach near Rodeo Lagoon. I caught up with her in Fairfield, where she had been transferred to International Bird Rescue. I'd had lunch with the head of it two weeks before Gigi had landed on the bridge. I told Jay Holkum, who ran International Bird Rescue that I wanted to make a pelican movie, but that I didn't know where to start. He said as soon as I figured it out I could come and hangout in the aviary as long as I didn't hassle the birds. So, it was really cool that she ended up there. I was allowed to sit in this wonderful hundred foot-long pelican aviary they have. It is long enough so that when the birds start getting better, they have a nice distance to fly from perch to perch. 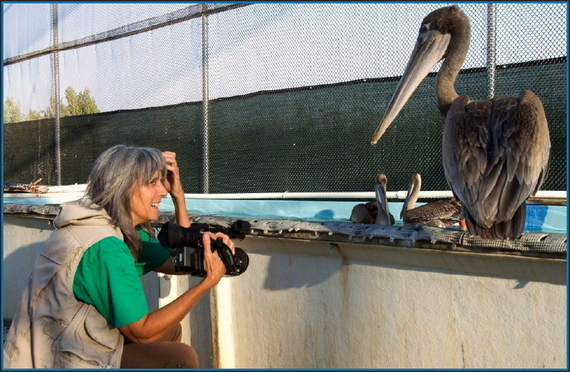 Enter Morro, a mature and disabled pelican who lives on the sheltering grounds at the home of dedicated and licensed rehabilitators Dani and Bill Nicholson in Morro Bay. As a descendant of 30-million-years worth of pelicans, Morro shows us how to live in the moment. Though not with his own kind, Morro has acquired an Education Permit. At least once a month, Morro is chauffeured out for brief cameo appearances and then returns home to his pool, lounge chair, a full-length mirror and (for now) a stroll with a star-struck duck.

When I started the film, I just wanted to do a Valentine to pelicans. I was pretty ignorant about their life -- the survival challenges they have to go through everyday. As I spread out my shooting schedule from Baja to Washington state and started following their migratory route and learning more about them, I gradually came to understand how many problems they face along the Pacific coast -- most of them human-caused. I couldn't leave that out. This is part of the pelican's life. When a pelican's life is good, it is very, very good. They surf the wave crests, they soar, they dive, they get fish, they sleep comfortably with their beak tucked into their feathers. When a pelican's life is bad, it can be very, very bad. 'I've got a fishhook caught in my pouch -- I have a line wrapped around my leg -- I ran into a snowstorm from climate change -- I got frostbite -- I was diving and all of a sudden I was diving into an oil slick, lost my waterproofing and got really cold.' There's tons of problems out there for them. They do the best they can. They're trying to survive. I feel it's all part of the story. You just develop more respect for them the more you know about what they have to go through. 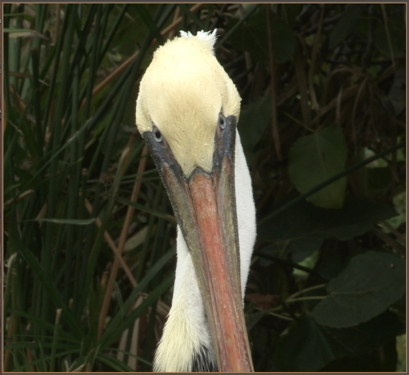 Click here for screenings of Pelican Dreams coming to a theatre near you.