Hands up, who's visited the most hostile battlefronts in the very middle of the longest war in American history? No? Me, neither. However, having viewed The Hornet's Nest, the new documentary set within the conflict in Afghanistan (and not the Jimmy Carter book; though they probably share themes), I got a sense of the real issues -- not the Hollywood representation; the real stuff -- being imparted to the viewer. Constructed from hundreds of hours of close-up, front-line, often harrowing footage shot by veteran war correspondent Mike Boettcher (and his son Carlos Boettcher, with whom he won an unprecedented shared Emmy for their work), The Hornet's Nest digs in with the troops: Army and Marines, primarily enlisted soldiers, mostly under 30, some of whom won't make it home. I spoke with co-directors David Salzberg and Christian Tureaud (The Perfect Game) about their experiences crafting this unusual and often disturbing, yet quite revealing, production. 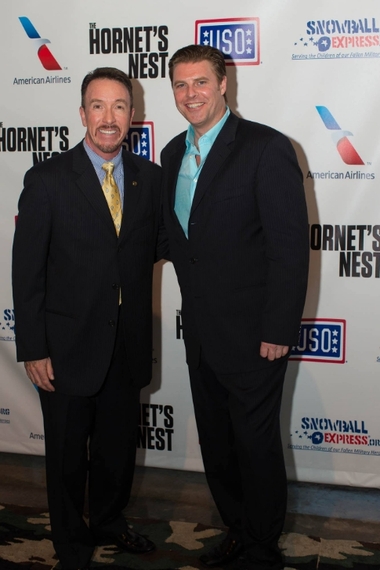 It turns out that the filmmakers met the Boettchers via their financiers Ed Coppola and Stuart Hoge, (for their rather risky father-son bonding experience!), leading, through much editorial honing, to The Hornet's Nest, which is at once a portrait of Mike and Carlos, and of the soldiers struggling in Afghanistan -- as well as of the people of that country. (Afghanistan, it turns out, looks remarkably like Malibu, so I ask if the filmmakers cheated on any pick-up shots. Assuredly, they did not -- which you can see for yourself.)

Exclusive clip from The Hornet's Nest

When asked how they carve a cogent film from subject matter that's simultaneously intimate and familial, and sprawling and volatile, David responds: "Mike and Carlos were really reluctant about having a story about them, because of their journalistic integrity, so it took a little convincing -- because that was a prerequisite for us to come in and direct -- because we saw parallels in Mike's life sacrifice, commitment beyond himself -- his telling of stories: you know, he's kind of Ernie Pyle reincarnated: the great journalist from World War II that lived in the trenches with the soldiers -- and ultimately gave his life doing it.

"We saw this parallel story between Mike's world and what he had been through, in 35 years as a conflict journalist, and what everyday soldiers, Marines, airmen and sailors were going through, especially folks that are on the front lines, in heavy-duty combat situations. Once they let us tell their story, the focus became paralleling the father and son reconnecting -- and Mike's whole thing about living beyond himself, and giving back, we found that the soldiers and Marines said the same thing. 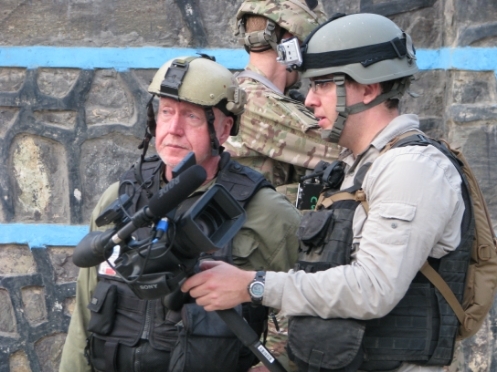 David concludes his point by noting that The Hornet's Nest is one of "the seven basic stories" ("Ordinary Man or Woman in Extraordinary Circumstances"), plus that, "it had to be a non-political view -- because every other film that we've seen, or the majority of films that we've seen in this space, whether they're scripted or they're documentaries: the scripted ones tend to glamorize the heroics of the soldiers or Marines, in their ability to overcome massive injuries -- which is not real. So the non-political thing: we want to make films that unite, not divide."

The filmmakers' quest for objectivity is appreciated, as I am extremely allergic to jingoism. I ask about the sociological value of soldiering, to which Christian responds:

"If you don't know something -- I mean, we've learned a ton from working on this film. We've learned a lot as people. But if you don't know, and your mind is closed, that means your heart is closed -- and we have to be receptive to look at new information, even if it goes against the grain of what we believe."

Christian continues: "I personally didn't have anyone in my immediate family that served. I was pretty disconnected from the military, as a civilian, until this project. And the appreciation that I personally have now for them, it's at a level that you almost can't even express -- because we see what they go through, and the transition it takes on their lives -- not only them personally: physically, emotionally, spiritually; but their families -- it's a really difficult thing that they go through. But like David has said, they go through it because they believe in something greater than self, they believe it's their duty, they believe that if they don't do it, no one else will.

And (apart from the obvious desire to help people), what motivates them? Christian responds:

"It's a tough question to answer, but they go through this process, this metamorphosis: when they first go in and enlist, they do it for Country, for all the things I mentioned; but once they're there, once they're in the shit, frankly, in the battle, they do it for the guy to the right, and the guy to the left. They do it for their buddies. And that's all that matters, is coming home, and fighting for your brother. The commitment that these guys and gals have for one another -- they have each other's backs. They'll run through a hail of bullets, knowing that they might die, to go try to save their brother -- even though their brother or their sister might already be dead -- and you see it in the film!" 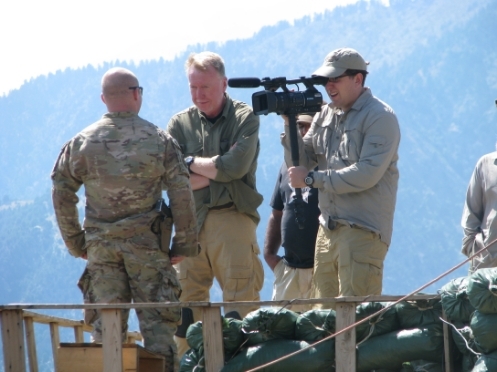 I bring up the levity introduced over the end credits of The Hornet's Nest -- funny stuff: young people being silly (plus the requisite puppydogs and baseball) -- which strikes a stark but necessary balance with the production's heavy memorial sequence.

"Everybody that was crying -- you saw this at Sony," recalls David of a packed screening, "it's really a unique mix: because people are on the edge of their seat, their heart pounding, and we hear gasps -- and we hear crying -- but we also hear, in the 'chicken scene' and the 'dancing soldier,' we hear laughter -- and it's something that, as storytellers, our view: We try to make audiences feel something, and go for the gamut of emotions, because everybody wants to feel something. And the way the news has worked for the past thirteen years, they're either really left, or really right, and they're these little 2-3-minute pieces that are geared toward an end-result: geared toward making you think something -- and our project is meant to be experiential."

David continues: "Dr. William Perry (former Secretary of Defense under President Clinton) -- This is a guy that was at Hiroshima, as a young lieutenant after the war, and is one of the biggest anti-nuclear advocates on the planet, he said: 'Having been in combat, I distinctly remember every person I was with,' and he goes, 'The only thing you don't get in this film -- is the smell.'"

Christian recalls Terry and Elizabeth Burgess -- parents of a fallen soldier -- at the Sony screening. "He [Terry] says the film saved his life. When he learned that his son Bryan was killed, he didn't have a reason to live anymore. He met us shortly thereafter, and he's been to 25 different screenings. He and Elizabeth come to every screening that they can -- they've said that it's a small way that they can live up to Bryan's sacrifice and commitment.

"Another one, Rory Hamill, is a third-generation Marine who stepped on an IED, lost his leg, has a prosthetic -- he came back to the States from a deep, dark place: he actually said it at our premiere event in Dallas two weeks ago. He told an audience of 600 people that he was going to take his life, and then he met us, and he said, 'The film saved my life. I now have a purpose. I now have some closure. I now can express this experience with my family, and they know what I went through. It's given me a new lease on life.'

"Those are just two examples," concludes Christian. "We could give you 30 or 50 examples -- of soldiers, Marines, Gold Star widows, mothers and fathers and family members of current guys and gals that are coming back with major issues -- they all tell us: 'This is digital medicine.' They say, 'this helps us cope, helps us deal, creates closure, sparks dialogue.' When these tough guys don't talk about it, and they can never explain what they've gone through, this allows them to get in that moment, and it starts to rebuild the family together. That is the most amazing thing, and the most humbling thing of all."

The Hornet's Nest is rolling out across America. You can see it here.