Lately, I keep telling the same story. It feels urgent, though its takeaway is not revelatory or at all new. 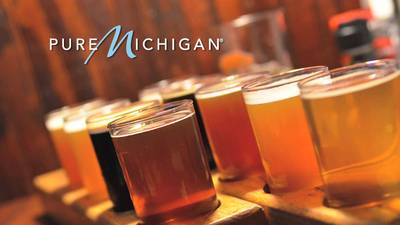 When we were 16, our blood still a puzzle in mid-figuration, my friends and I would pay $10.00 each to heft proudly, like a painter's box, six-packs of Bell's Oberon down to a beach on Lake Michigan. If you drink beer you've likely heard of Oberon by now, or at least seen it on store shelves--the azure box marked by a sun sprouting languid tentacles of flame. We were not certain, then, that we were artists, but we were certain that Oberon was an artful beer. And it was. Sand-sprawled, listening to the lake's rhythm, we'd cock our heads and tilt the amber bottles in the sun to watch the woken sediment carouse and hover in the light. It was only dormant yeast and protein residue, but those particles were authenticity--motes of brilliance absent in the Coors and Millers of the accepted world. They were unabashedly organic, and in their sunlit dance was, maybe, even, the choreography for a life well-lived: rise, hold, shimmer, return. The beer was evocative, and in sipping it we grew twice drunk--on summer, and its seeming liquid incarnation.

Based in Kalamazoo, Bell's Brewing was still relatively unknown then, in 2000. The true definition of a micro-brewery, Bell's brewed Oberon in small batches that were bottled and shipped only along the coast of West Michigan. Toting the blue boxes to parties in Detroit or Chicago, we'd give out the bottles as an islander might native shells, always first tipping them toward the light to say "Dude. Look. Unfiltered." The give of sand beneath bare feet, the vastness of a lake without end--these we could not offer, only tokens through which swam the silt of our golden youth. They were enough.

Gradually, Bell's Brewing grew. By my third year at college in upstate New York I could walk to Wayne's Market after class and pick up an Oberon six-pack. I rarely did. The beer was different--far sweeter, and without sediment--its essence diluted in the interest of broad distribution. This was an Oberon suited for chain wing joints with sticky tables and waitstaffs wearing practiced smiles; one now destined to share cooler space with Blue Moon and Shock Top at suburban cookouts where burgers are served on paper plates that go unrecycled. Coaxed by nostalgia and the faint hope that geography could restore our spoiled wonder, my friends and I reunited on the beach that summer, each dutifully lugging six-packs of the beer that had once fueled our thrall. Amid the inevitable laughter, facing the sun-lacquered lake, we drank and lamented the agreed-upon death of Oberon's artistry. We were not lessened, just impressed with new notions of change.