Here is a screenshot of the Kochs' 2002 introduction of their "Tea Party," with a quotation from the original Tea Party's leader, Sam Adams, back in 1773: 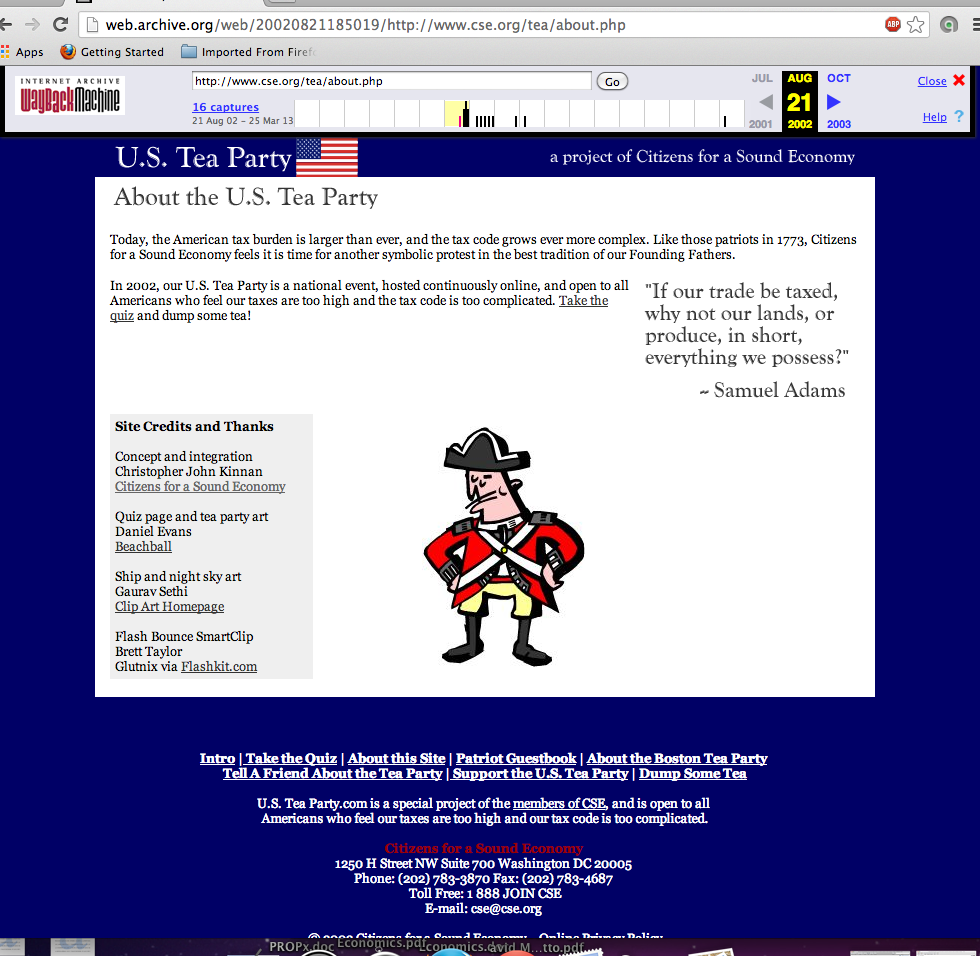 The Koch-founded-and-run Citizens for a Sound Economy (shown there as running this "Tea Party") subsequently divided itself into two parts: FreedomWorks, and Americans For Prosperity. Both parts ardently pushed the Tea Party "movement" (which didn't yet exist).

Then, on November 8, 2006, their coming website was announced specifically in Chicago, as the "Sam Adams Alliance":

It has certainly been a momentous year in politics. Across the country, as politicians and rogue judges have blatantly disregarded the will of the people--on spending, on property rights, on the size and scope of government and more--millions of citizens responded by taking matters into their own hands to put meaningful, substantial reforms on the ballot in several states.

While we certainly have a long way to go, it's inspiring to know that this is the beginning of a larger movement to restore citizen control of government. As such, we are pleased and proud to announce the formation of two new organizations: the Sam Adams Alliance and its partner C3 organization, the Sam Adams Foundation.

Those of you who were able to join us at the inaugural Action Conference in Chicago this August heard a lot of talk about Sam Adams. Activist of the year Mary Adams described him as a true citizen leader, known for his courage, dedication, and his keen ability to "set brushfires of freedom in the minds of men." Most importantly, he recognized that true change begins and ends with strong citizen networks and the recognition of individual talents and strengths.

The Sam Adams Alliance has been formed to take the mission of empowering local volunteers and citizen networks to the next level. We believe that the government should serve the citizens, not the other way around. We also believe that the greatest resource in this fight is people. Because of this, our primary aim is to empower those who seek a more limited, accountable government, helping them to form freestanding, effective, and lasting networks in states across the nation.

This project is about learning from local leaders, forging new alliances, and providing support, connections, and services so that local groups can grow and flourish. Local volunteers and leaders are the paramount players in ensuring that the government is limited and accountable to the people. It is our hope that the Sam Adams Alliance will provide a multiplier effect so that these leaders can connect, share ideas, unite, and win.

We aim, in short, to be the premier networking station for citizen volunteers, donors, and local leaders who want to make real change and put citizens back in charge of government.

Our time with Americans for Limited Government has been rewarding, and has taught us valuable lessons. It has also laid the groundwork for what we believe is the necessary next step towards a citizen movement with true staying power. We wish ALG the best in their new office in Fairfax, Virginia as well as in their continued work for greater liberty across the country.

Expect to hear more from us over the next few months. We hope that you will join us in uniting citizens across the country...so that they can light a few brushfires of their own.

The Sam Adams Alliance's CEO, Eric O'Keefe, was described by sourcewatch as having "deep ties to the Koch brothers. He helped launch the American Majority Tea Party group which trains right-wing candidates to run for office. He sits on the Board of Directors of Club for Growth Wisconsin, which ran divisive ads [heavily funded by the Kochs] in support of [Republican] Governor Scott Walker's radical overhaul of collective bargaining rights for Wisconsin workers. He has also served on the board of Koch's Institute for Humane Studies" and other Koch-funded organizations.

The Alliance's co-founder, John Tillman, is now the CEO of Chicago's Illinois Policy Institute, which was started in 2002. IPI's focus is described as "free market principles." Sourcewatch has shown that IPI is itself deeply tied to the Koch "nonprofit" money operation, including the American Legislative Exchange Council, and also the Cato Institute (Cato, for example, having donated $50,000 to IPI in 2006).

During the closing years of George W.Bush's presidency, the Sam Adams Alliance actively educated (or propagandized) their followers, including a "Meetup with Americans For Prosperity-Illinois" on December 19, 2007.

The Sam Adams Alliance's "Sam Adams Project" was profiled in a blog at The New York Times on July 19, 2008, which noted the project's ties to the Kochs' Americans For Prosperity.

Then, Barack Obama was elected president, and The Sam Adams Alliance (still only a Chicago organization) advertised for unpaid workers or "interns" to "apply through the Koch program": 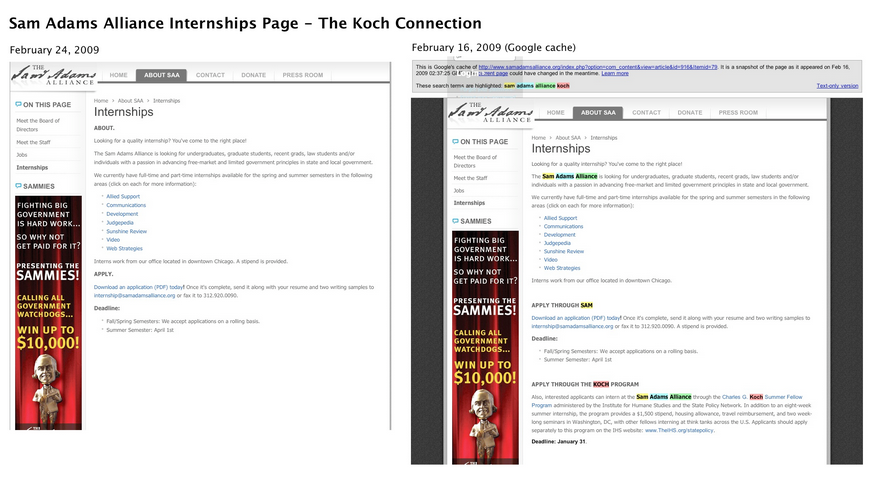 The extremely conservative Rick Santelli was on the floor of the Chicago Mercantile Exchange during this time, on 19 February 2009, telling CNBC's very conservative audience that Obama's proposed economic stimulus caused America's Founders to be "rolling over in their graves," and at 2:12 in the video, he urges that there be a "Chicago tea party in July," but he does not actually mention the "Tea Party," nor does he mention by name Sam Adams.

Finally, the Kochs' own astroturf "grass roots movement" became very public and active at the Koch-created FreedomWorks: unmistakably, this is the "Tea Party Movement" as we know it. Notice that the URL shown here says "iamwithrick," which means "I am with Rick Santelli." In other words: it means that FreedomWorks was serving as a national megaphone for Rick Santelli's rant. 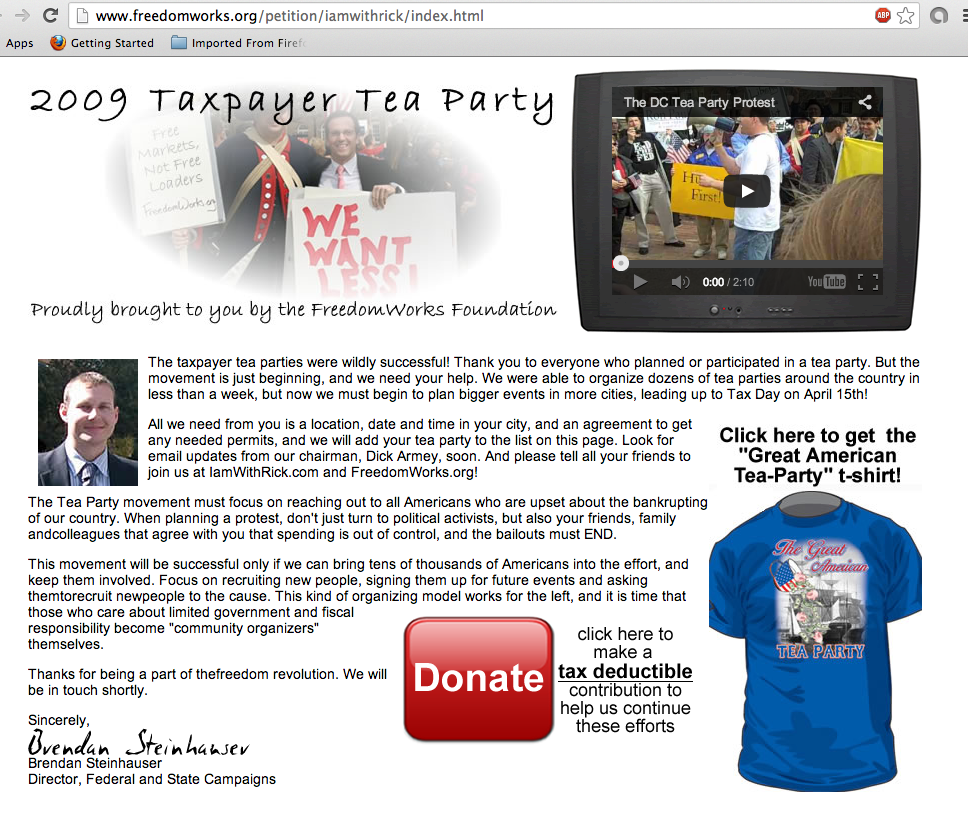 The Illinois "campaign" was the first of the "federal and state campaigns" to go public, but that operation might have been a trial run for a federal campaign. In any case, since the very same person, Brian Steinhauser, was atop all of the campaigns, both "federal and state," there clearly was coordination on a national level; and the seed money (and much of the subsequent funding) for FreedomWorks came from the Kochs.

As Mark Ames and Yasha Levine first reported in February of 2009, less than a month after the start of Obama's presidency, this "Tea Party" (not even generally heard of, at that time) was actually no "grass roots movement," but was instead a large-scale operation of the Kochs and of their billionaire friends. (Ames and Levine published this report on their own news site, because no major "news" medium would publish it.)

The basic theory behind this Tea Party "movement" was first clearly publicly stated by then-congressman Jim DeMint (R-SC) in the New Yorker on February 19, 2001. Nicholas Lemann wrote that DeMint told him "Today fewer and fewer people pay taxes, and more and more are dependent on government. ... Every day, the Republican Party is losing constituents, because every day more people vote themselves more benefits without paying for it." The goal of the "Tea Party," therefore, at least from the standpoint of the people (such as DeMint, now the head of the Heritage Foundation) who created it, is to loosen the bond between voters and government, by privatizing Social Security, Medicare, public schools, and other social programs. And the best way to force that to happen is to starve government of funds for such programs. (For public education, another means was private school vouchers, which would transfer some students into parochial and other private schools, thus ending teachers' unions.)

As LeMann himself put this, "A program of tax cuts stretching out over many years would make it more difficult for the Democrats to launch new programs that would increase voters' loyalty to them. All these changes would have the collateral benefit of strengthening Republican interest groups, like stockbrokers." (Private schools are also a Republican interest group; and there are, of course, many others, not just "stockbrokers.")

This analysis, promoting class warfare by aristocrats against everyone else (i.e., against the people who rely on those social programs), was developed by DeMint at greater length soon afterward in a lecture on May 8, 2001 at the Heritage Foundation, an organization that had been established in the late 1970s by Richard Mellon Scaife, Joseph Coors, and a few other dedicated True Believing aristocrats. Coors, in fact, was the head of Ronald Reagan's "kitchen cabinet" before Reagan became the U.S. President and obtained an official cabinet. As I have documented recently, the Kochs started in 2002 to pour millions into the Heritage Foundation, and this money funnel to Heritage continued up till very recently, when Jim DeMint was basically running the Tea Party from his perch there, and was even choosing the people, like Ted Cruz, to be funded into Congress so as to carry out the "Tea Party" operation. The Kochs and their friends have heavily funded the "electoral" campaigns of all of these operatives - including of DeMint himself, while he was in Congress, and now atop Heritage.

A much more extensive historical account of the origins of the "Tea Party Movement" can be found in three earlier reports that I did.

This is "democracy" in today's United States. The agenda of the Republican Supreme Court in Citizens United, etc., is to increase this "democracy" by removing the limits on campaign finance. Instead of one person one vote, we are increasingly moving toward one dollar one vote, which will leave the 1 percent of who own almost everything owning the government too. But is that democracy? Or is it fascism? And do Republicans and other conservatives know the difference between the two? And do non-conservatives even care whether they do? Because that's what we're getting more of, even if Republicans, or even liberals, don't care about it - and maybe even because they don't care about it.

Many journalists care so little about it so that, for example, Jacob Weisberg, the Chairman and Editor in Chief of the Slate Group, in a October 13, 2011 article titled "Occupy Wall Street and the Tea Party: Compare and Contrast," opened: "The Tea Party movement began on Feb. 19, 2009, when Rick Santelli, the CNBC financial journalist who reports from the floor of the Chicago Mercantile Exchange, ranted against the government bailing out homeowners who couldn't pay their mortgages." He portrayed both groups as grassroots movements. He closed: "As spontaneous, unpredictable movements, ... they have more in common than meets the eye." Some in the press, such as Rupert Murdoch, cooperate knowingly with the Kochs and their friends. Others do it because ... because what? Is there an excuse for that? Should it even be called by the name "journalism"? Or perhaps instead: "propaganda."