Our nation's capital is blessed with an abundance of splendid parks, statuary, monuments and memorials.

But, as pointed out by the World War One Centennial Commission (the Commission), most of them honor "generals, presidents, statesmen and other individuals of distinction" and many of these commemorate the heroes and the battles of the American Revolution and the Civil War.

There are numerous monuments and memorials to the Military Services, specific units, battles and war heroes in Washington D.C. and thousands of memorials in towns and cities across the country to local residents who gave their lives in conflicts, battles and wars from the War of Independence to the Iraq and Afghanistan Wars -- including the war on terror.

But what was lacking in Washington, D.C. was the concept of "national" war memorials, i.e. memorials "commonly accepted as the nation's memorial for all its citizens who died in a particular war."

There are two memorials in Washington, D.C. called World War I memorials.

One is the in 1931 dedicated World War I memorial on the National Mall, which has inscribed on its base the names of the 499 District of Columbia citizens who lost their lives in the war and, on a cornerstone, the names of the 26,000 District residents who served.

The other one, the Pershing Park, was originally authorized by Congress in 1966 as "a memorial to the late John J. Pershing, General of the Armies of the United States, and to the officers and men under his command." According to the Commission, Pershing Park "may be seen as the last of the 'great man' war memorials."

Neither monument, however, meets the strict interpretation of what a "national" monument is or should be.

In January 2013 Congress passed and President Obama signed Public Law 112-272 establishing the World War One Centennial Commission "to ensure a suitable observance of the centennial of World War I, to provide for the designation of memorials to the service of members of the United States Armed Forces in World War I, and for other purposes."

The Act describes "the war to end all wars'' as one where "More than 4,000,000 men and women from the United States served in uniform during World War I" and a war in which the United States suffered 375,000 casualties, including 116,516 deaths.

Certainly a sacrifice worthy of a truly national memorial.

In December 2014, the National Defense Authorization Act authorized the World Wa One Centennial Commission to further honor the service of members of the United States armed forces in World War I, by redeveloping the Pershing Park site.

In May of this year, as part of promoting such a "suitable observance" of the centennial of World War I (from 2017 through 2019), the Commission announced an international design competition for the new National World War I Memorial to be built in Pershing Park, on Pennsylvania Avenue, one block from the White House and with a clear view of the U.S. Capitol.

The memorial envisioned by the Commission is to serve as "both a dynamic urban space and, more importantly, a fitting memorial to a generation of veterans whose service and sacrifice were no less valorous and heroic than that of the veterans of later wars - the generation that were the fathers and mothers of 'the greatest generation.'"

During the following three months, the Commission received more than 350 design proposals and, on August 19, Robert Dalessandro, Chair of the World War One Centennial Commission, announced the five finalists (below).

The five selected concepts will now proceed to "Stage II" of the design competition where the "five finalists will work in consultation with the commission, public agencies with ultimate approval authority over the design, and other stakeholders to further develop and refine their initial design concepts."

The Commission plans to announce the final design concept in January 2016 and hopes to open the Memorial to the public by Nov. 11, 2018, the centennial of the Armistice.

The World War I Memorial will then rightfully join three other national memorials commemorating and honoring the men and women who served and died in the three other major wars fought by the United States in the 20th century: The Vietnam War, the Korean War and World War II.

The Memorial is expected to cost between $20 and $25 million to build and it is estimated that the commission will need $20 million to $25 million over the next five years to operate.

However, the aforementioned Public Law 112-272 contains the little "but" sentence: "No Federal funds may be obligated or expended for the designation, establishment, or enhancement of a memorial or commemorative work by the World War I Centennial Commission." It is for this reason that the Commission is asking the American public for contributions of any size.

If you want to help build this monument to remember and honor those who served and gave their lives in World War I -- our fathers, grandfathers, our ancestors -- please go to the World War One Memorial Fund site here.

You can also submit your views and comments on the concepts -- which will be reviewed by the competition officials -- here.

The following are selected aspects of all five submittals. To view the full design details, please click here. 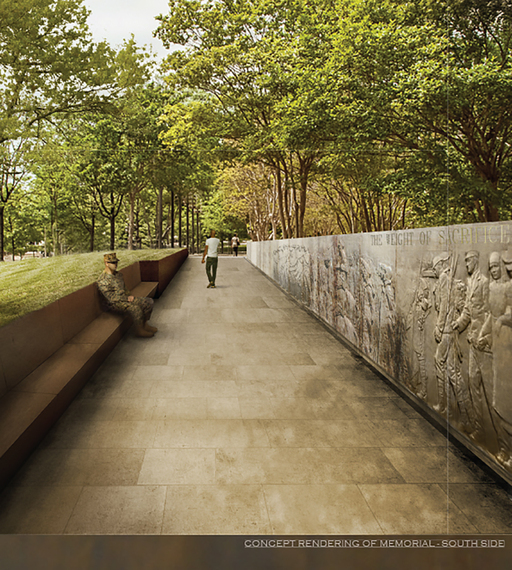 "The Weight of Sacrifice" submitted by Joseph Weishaar of Chicago, IL 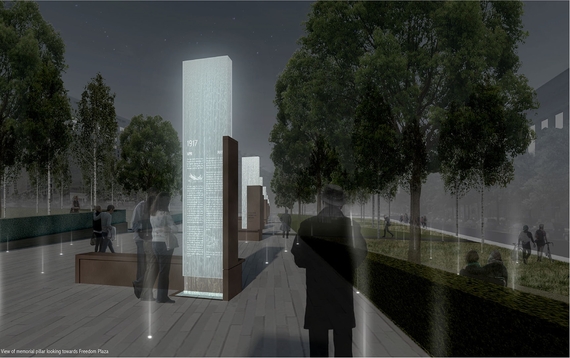 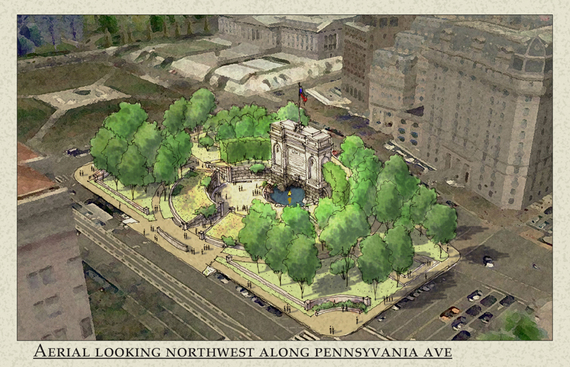 "An American Family Portrait Wall in the Park" submitted by STL Architects in Chicago.

All images with permission from the World War One Centennial Commission.