The financial crisis likely cost at least a year's worth of U.S. economic output, a new Fed study finds. Worse, it's hurting the economy even now and will hurt it for years to come.

That is the cheerful conclusion of a new study by economists at the Dallas Federal Reserve, entitled "How Bad Was It? The Costs and Consequences of the 2007–09 Financial Crisis."

So how bad was it? Really, really bad: The economists say a "conservative" estimate of the damage is $14 trillion, or roughly one year's U.S. gross domestic product. This is based on how much output was lost during the crisis and Great Recession, along with all the damage done to potential future economic growth.

This is a factoid worth keeping in mind the next time bank lobbyists and flaks warn, as they habitually do, that new rules and regulations could slow the U.S. economy. Will rules to safeguard the economy vaporize $14 trillion in GDP? No? Then they're probably worth doing.

"Given our range of estimates, the tepid economic recovery, and the litany of other adverse effects stemming from the Second Great Contraction, we suggest that the total domestic cost is likely greater than the equivalent of an entire year's output," the Dallas Fed economists write. "Thus, it is crucial to identify the primary causes and implement effective policy to avoid future episodes whose magnitude could exceed even the staggering costs and consequences of the most recent financial crisis."

The Dallas Fed's numbers are consistent with a handful of other recent studies that have found crisis costs of anywhere from $13 trillion to $17 trillion to $22 trillion. 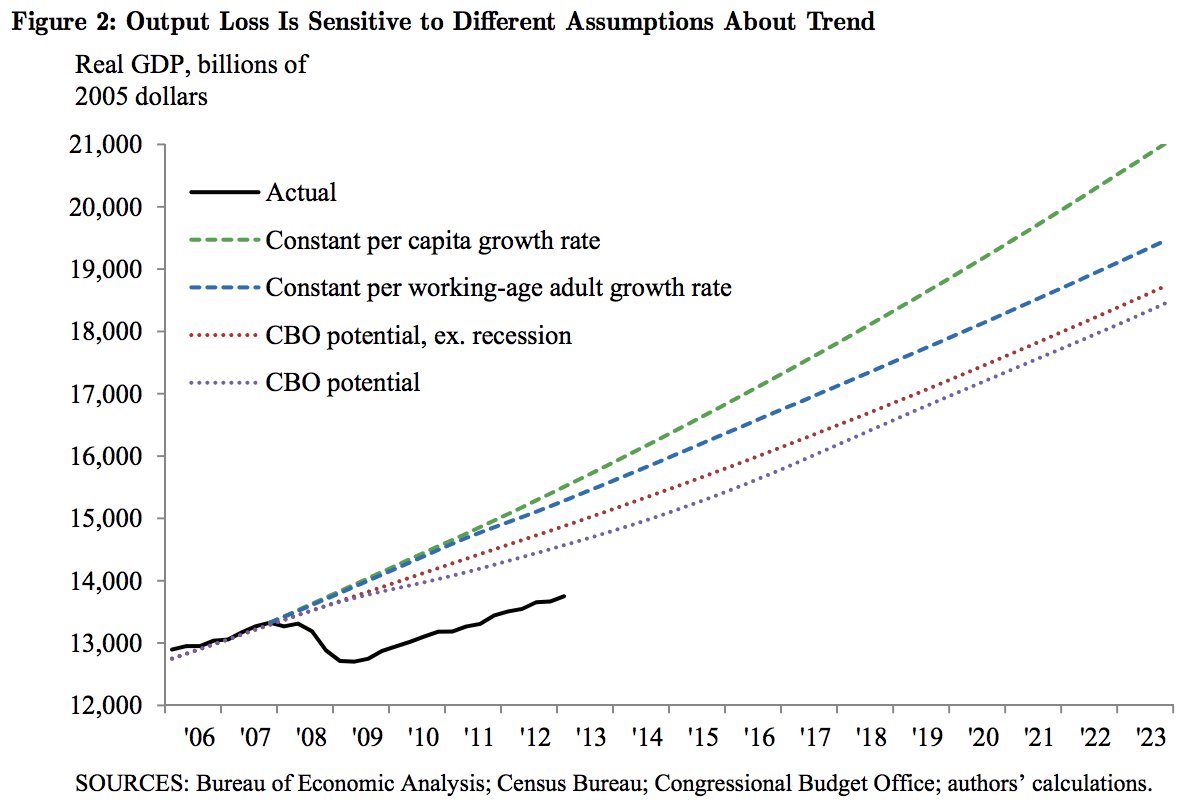 It does not help, as the Dallas Fed points out, that the recovery from the financial crisis has been much, much slower than any other recovery since World War II. This is painfully illustrated in the chart below. (Story continues below chart of pain.) 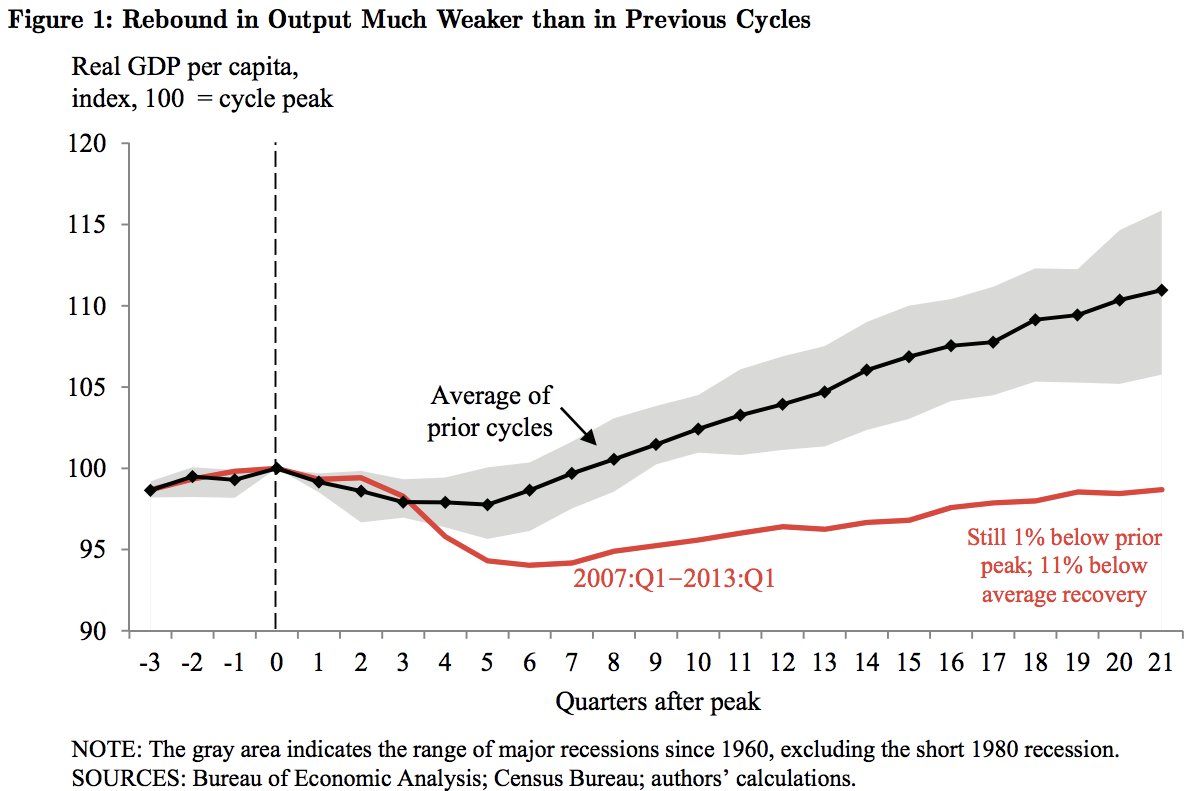 The ugliness of this recovery has to do in part with the fact that the crisis and Great Recession arose from a massive credit bubble, which tends to sap an economy's future strength. It also has to do with the fact that Washington, amazingly, has spent most of the recovery fighting over just how much to slash government spending despite this badly hobbled economy.

The problem is that all of this lost economic activity is doing permanent damage to the economy's productivity, forever lowering future growth. It is felt most directly in the job market, where the median length of unemployment is still far, far longer than at the worst of any other post-Depression recession. (Story continues below chart of misery.) 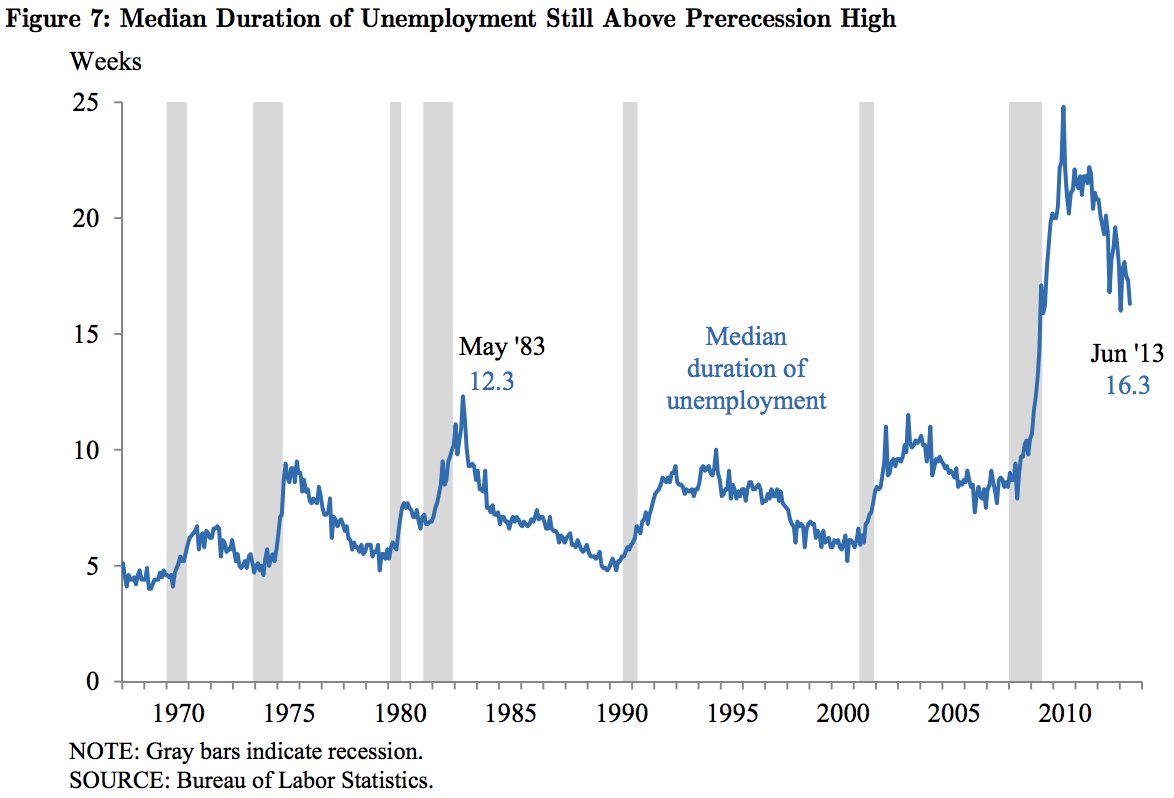 When people sit out of the job market for too long, they lose skills and become unemployable, taking them out of the labor force forever. That costs the economy in future consumption and output. The economic activity that will not happen in the future due to the wrecked job market is incalculable, the Dallas Fed economists say.

There are lots of other side effects of the crisis that the economists say are also impossible to quantify, including the loss of trust in capitalism and public officials, the moral hazard of bailing out the big banks and the potential costs of the Fed's extraordinary and risky measures to keep the economy alive.

Can we avoid doing it all over again?