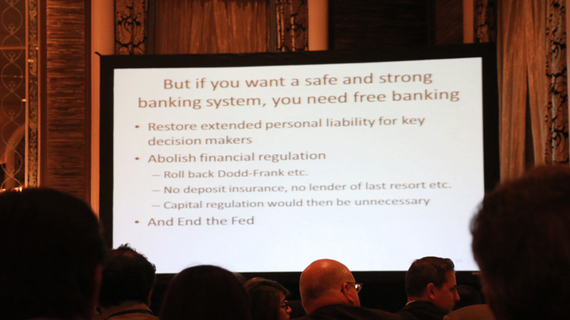 Asked if the Securities and Exchange Commission had ever reduced investor losses in its entire history, SEC Commissioner Michael Piwowar replied, "Excellent question. The answer to that question can be answered in three words: I don't know." He also told the crowd that the job of the SEC should be to promote not investor confidence but investor skepticism.

Citing a lack of demonstrable data, Commissioner Giancarlo denied that overspeculation was a factor in the 2008 financial meltdown. He went on to say that it was less important what he thinks and more important what Congress thinks -- that Congress could have found that excessive speculation caused the 2008 crisis but did not.

Á la Tony the Tiger, the director of the Cato Institute's Center for Monetary and Financial Alternatives, George Selgin, said with unabashed glee that bank runs are "great." This remark came during an extended schtick mocking George Bailey, the protagonist of the Christmas classic It's a Wonderful Life. Selgin concluded that Bailey's bank should have been run on because he spent too much time talking to angels rather than managing his investment portfolio.

After the conference, I asked Selgin to explain why bank runs are a good thing, given that most people would find that assertion counterintuitive in the post-2008-crisis era. He said that bank runs are a natural response by consumers and a needed penalty for bankers, and that federal deposit insurance should be eliminated. Without the backstop of the FDIC, consumers would be forced to thoroughly research bank balance sheets -- regardless of the financial savvy it would require for the average American to do so.

And Selgin thinks this is actually feasible -- according to his worldview, any investor or consumer dumb enough not to have thoroughly researched his investments deserves whatever losses he may incur. The problem with that line of thinking is that even savvy investors get taken for a ride. Remember Bernie Madoff? Collateralized debt obligations? AIG and credit default swaps? If so-called "smart money" investors get scammed in a regulated market, imagine the field day Wall Street would have on the dumb money in a deregulated market.

From the libertarian praise heaped upon these regulators, and from their own statements, it appears that they are big fans of deregulation. These men are charged with creating and enforcing the financial rules of the road, but they are anti-rule. Or, to put it another way, they are financial foxes guarding the Wall Street henhouse.