Three years ago I blogged "Is Financial Inclusion Imminent in India?" I have just returned from India after observing the progress India has made towards financial inclusion. Yes, there has been progress, but much remains to be done.

I visited Nandan Nilekani , profiled in the New Yorker, who is heading the massive project of creating digital biometric identity for over one billion residents in India. He told me that over 400 million residents already have digital IDs which means that their fingerprints and iris scans are in a database and are linked to a unique twelve digit number. The process of getting biometrics registered with the Unique Identification Authroity of India (UIDAI) takes only a few minutes as seen in the following video I took when I was at UIDAI office in New Delhi.

This unique ID, called the Aadhaar number, can be used as the financial address to which any bank account could be linked. It would have been useful if the bank account was created right there and then as in the State Bank of India's "one rupee account " initiative I wrote about in my blog three years ago. Similarly, Aadhaar registration could be integrated with Financial Access at Birth (FAB) initiative in which a $100 deposit would be created for every child born.

Once the fingerprints and iris scans are linked to the unique ID, this biometric identification can be used for financial transactions even by people who are illiterate. Micro-ATMs are small, portable, rechargeable battery-powered devices that currently cost about $300 to build (and these costs will likely fall with large-scale production) and can be used wirelessly for identity authentication using SIM card technology. Some banks in India are now beginning to deploy these at select locations.

I saw a demonstration of its use in a Bank of Maharashtra branch in Janakpuri in New Delhi. A woman came into the branch to withdraw 7,000 rupees (a little over $100 -- her account had a balance of 7,006 rupees). The bank-teller entered the name of the bank, the amount to be withdrawn, her 12 digit unique ID and asked her to place her thumb on the micro-ATM for authentication. The process was just this simple as seen in the following video -- she did not need to fill a withdrawal slip, show any ID or sign anything. More importantly, only she could withdraw the money, not her husband, her father or any other relative.

I think these micro-ATMS need to be deployed in large-scale not only in bank branches but also as point-of-sale devices in grocery stores, pharmaceutical stores etc. for their use to become ubiquitous and easy. Abhishek Sinha, a pioneer in mobile and branchless banking, co-founder of EKO, worries that biometric authentication may not catch-on because using a thumb-print for identification is associated with illiteracy and backwardness. A campaign in which celebrities are shown using biometric authentication for financial transaction may alter that perception and may even make it seem "cool" to the young and the educated.

In addition to EKO, telecom operators in India have begun to experiment with mobile money and mobile wallets for financial transactions. Vodafone has partnered with M-Pesa and Airtel has introduced Airtel Money in which consumers can convert cash to electronic money (and vice versa) in grocery stores, pharmaceutical stores etc. that they can use to transfer money to their relatives, pay utility bills, purchase train tickets etc. Telecoms rely on mobile phones, rather than biometrics, for authentication. Telecoms argue that the penetration and reach of mobile phones in India is very deep and they are better suited for providing financial access to the masses. Sriraman Jagannathan, CEO of Airtel Money, arranged for me to visit one store in Delhi where a couple of customers came in to buy Airtel money so that they could transfer the money to their relatives in the state of Bihar. Using mobile money is not as straightforward but customers learnt to use it because the cost of transferring money was only 1 percent. 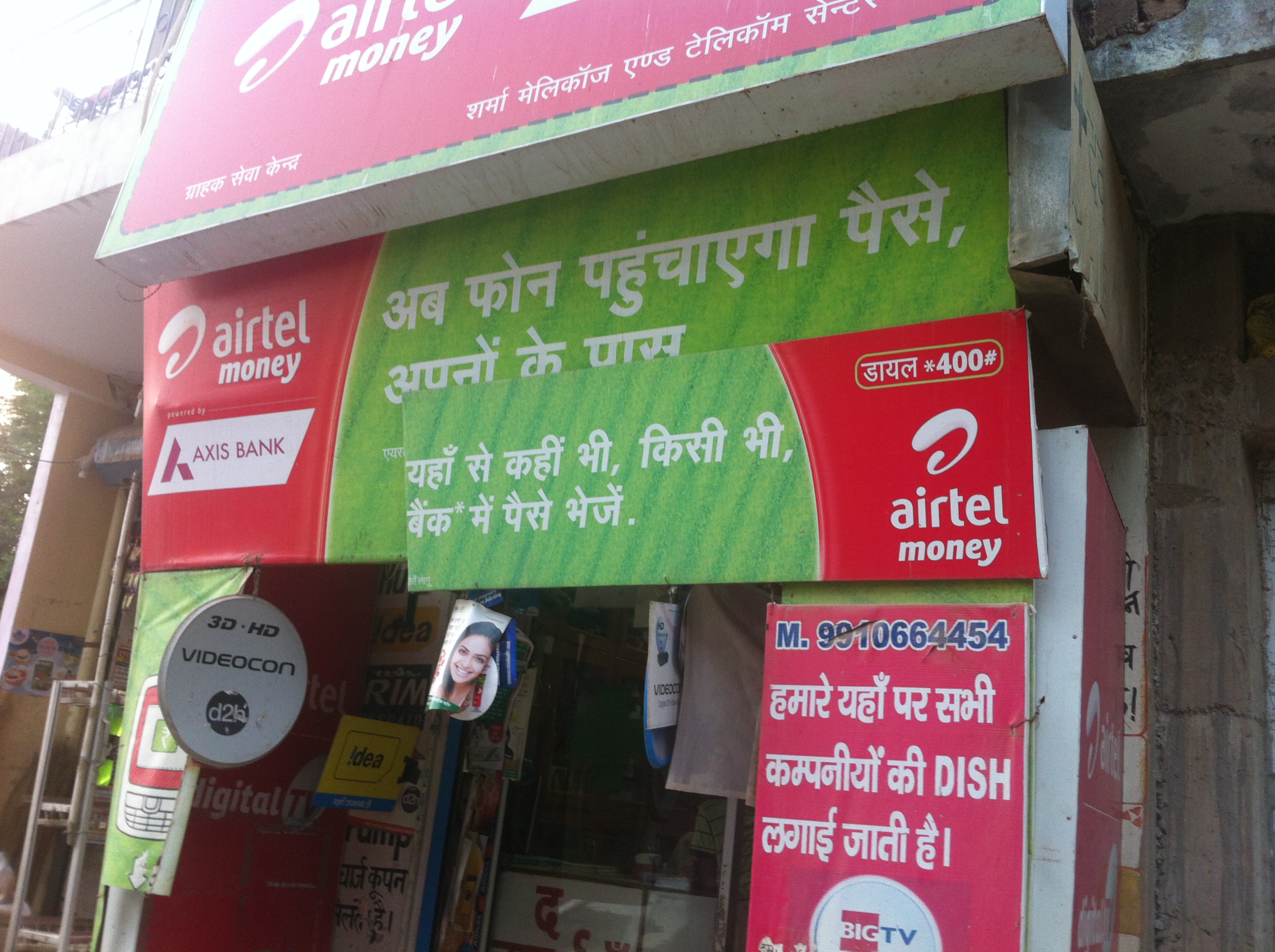 Despite all these signs of progress towards financial inclusion, the prevalence and reach of these new technologies is very limited and sparse. It can take anywhere between 7 to 90 days to receive the unique ID number by mail. I had to drive for an hour to find the store where I could see a couple of customers using Airtel money. Similarly, the Bank of Maharashtra branch where micro-ATM was deployed was also a 45 minute drive. This will certainly change. But even so, people in India seem to be using mobile banking services mainly for money transfer. Use of cash for transactions is by and large the norm in India. Mobile money and mobile wallets have to feel seamless, safe and perhaps even simpler than using cash (after all, customers do not need to plan and carry cash and store owners do not need to make change for every transaction), for their use to become ubiquitous which in turn will reduce the transactions costs to negligible levels. The Reserve Bank of India (RBI), which regulates banking and payment services, needs to encourage multiple providers, including telecoms, using fair and competitive regulatory structure to make financial access truly inclusive. Raghuram Rajan, the newly appointed governor of RBI is well aware of challenges and opportunities of financial inclusion in India and is likely to push for reforms that will make financial inclusion a reality in India in the near future.