Van Helsing: "The strength of the vampire is that nobody will believe in him."

America's debt to Wall Street has soared since 1945 -- and although the banks were rescued at the public's expense, the public's been left holding the bag for the recent drop in housing prices: 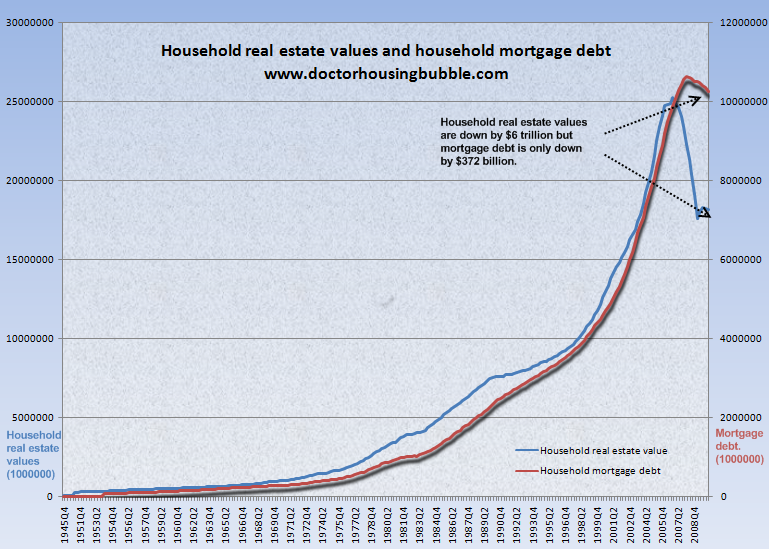 Hmm... How many times has the word "vampire" appeared in books during the same period [1]?

What does this mean? Does it reflect the public's subconscious response to predatory banking? Or is it just some guy having nerdy fun with data sets by juxtaposing two trend lines that have nothing to do with one another? We report, you decide.

Here's what we do know: Like their fictional counterparts, America's banks are revenants, re-animated creatures who were brought back from the dead through the public's generosity. Now they're feasting on the rest of us again, while politicians in Washington work to rob us of the few tools we can use to defend ourselves. With some Democratic complicity, Republicans are fulfilling the promise of Rep. Spencer Bachus, who said that "Washington and the regulators are there to serve the banks."

And what they're serving them is you.

The Count: "Listen to them! The creatures of the night. What music they make... "

The rap sheet against America's banks grows longer and longer. They keep stringing people along with phony foreclosure negotiations, and then foreclose anyway. And we're hearing more and more stories about bank agents who, as they're invading and padlocking illegally foreclosed homes, also steal the private property inside them. In a recent ghoulish case, they stole a box containing the ashes of the homeowner's husband -- ironically enough, from a woman named Ms. Ash. Even vampires don't do that.

The states of Arizona and Nevada are suing Bank of America, one of corporate America's worst offenders, for repeatedly breaking the law as it forecloses on homeowners. The Arizona suit says that the bank has "consistently misled homeowners about its home loan modification process."

Foreclosure fraud isn't the only kind of bank criminality, of course. Deutsche Bank just plea-bargained its way out of criminal charges for helping people get out of paying their taxes. There's that matter of laundering drug money, and countless other crimes, large and small. But the widespread criminality surrounding foreclosures strikes the closest to home, but literally and metaphorically. After their taxpayer-funded bailout, these revenants are literally biting the hand that fed them.

Renfield: "I'm loyal to you, Master! I didn't betray you!"

Fortunately for them, the bankers have friends in low places. First the GOP killed the omnibus spending bill that funded many of the financial reform bill's provisions for protecting the public against predatory bank policies. Senate Democrats are trying to avoid a shutdown of government by introducing a continuing resolution but, as Pat Garafolo points out, it doesn't include any of the additional money needed to enforce the financial reform bill.

The Democratic resolution adopts the classic right-wing, budget-cutting notion that government should avoid spending increases and keep its budget numbers flat -- or, as their resolution puts it, "funding would continue at FY 2010 enacted levels for most programs." That's a terrible mistake, both tactically and practically.

The SEC would be particularly hard-hit by this resolution, just when it's starting to pursue foreclosure fraud more aggressively by issuing subpoenas to the big banks and loan servicers. (Is that a coincidence, too?)

One of the reforms blocked by this funding move include the appointment of an "investor advocate" to assist stockholders who have been misled by corporations. Apparently these "conservatives" are more than happy to interfere with a free market, even the stock market, if their paymasters direct them to do it. The broad category of "investors" includes pension plans and other plebeian organizations, after all -- and private investors are merely wealthy, rather than the extremely wealthy they live to serve.

The Bacchanalians have also stalled the funding of a whistleblower's office. That action will ensure that bank criminals aren't interrupted in their wrongdoing just because some underling is struck with an excess of conscience. They've also blocked the Office for Credit Ratings,, so we're still stuck with the corrupt, rigged ratings game that led to the last economic collapse.

Our elected leaders aren't the only ones baring our necks to the predators' fangs. The Federal Reserve's also getting into the act. As the National Consumer Law Center puts it, the Fed has "proposed new rules that make it much harder for homeowners to escape abusive loans, avoid foreclosure or obtain refinancing." The timing's not coincidental. They're rushing to put this rule into place before responsibility for mortgages is transferred to the Consumer Financial Protection Bureau. In this vampire story, Elizabeth Warren is Professor Van Helsing and the Federal Reserve is Renfield, Dracula's eager human servant.

Van Helsing: "We are dealing with the undead."

We know what needs to be done. A roster of banking and economics professionals has signed an open letter to regulators asking them to step in and correct these systemic flaws and abuses. But they couldn't do that without money, even if they wanted to. The head of the Commodities Futures Trading Commission says he can't implement financial reform without these funds.

We realize that comparing bankers to vampires is harsh, excessive, and unfair... to vampires. Vampires only target one victim at a time, after all. Vampires have the common decency not to show themselves in broad daylight. And as we all know from the movies, they're charming, polite, elegant -- and terrific dancers. (I used to work on Wall Street and believe me: Bankers aren't a pretty sight when they dance.)

What's more, vampires won't enter your house without an invitation. As Ms. Ash learned to her horror, bankers aren't that civilized.