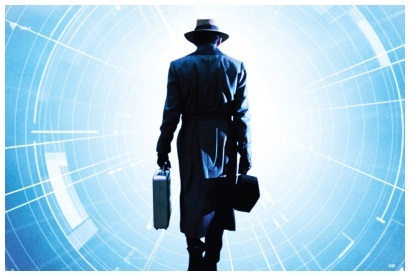 It's January Mysteries time! Usually it's no secret why a film gets given a January release date. The month's largely a dumping ground, a catch-all for films that, for one reason or another, have been found wanting. But occasionally a film lands in the month that, from all on-screen evidence, should have received better treatment. Hence, the mystery.

Such is the case with Predestination, a science fiction tale based on Robert Heinlein's classic, time paradox story, All You Zombies, and starring Ethan Hawke as a time-travelling cop going undercover as a bartender for a crucial recruitment mission. Despite a few narrative bumps -- including a not-all-that necessary b-plot about a mad bomber -- the film, directed by the twin Spierig Brothers, is handsomely mounted and nicely told. So what got the film shunted to the armpit of the release year? More, why didn't anyone think it deserved better than the handful of theaters it was released to? I cannot explain, but I can tell you why I think the distributors in this case were wrong-wrong-wrongedy-wrong, and I do in my latest review for Jim Freund's Hour of the Wolf. Click on the player to hear the segment, or right-click the link to download.

Hour of the Wolf Movie Review of Predestination

LISTEN TO HOUR OF THE WOLF EVERY
THURSDAY MORNING AT 1:30 AM
ON WBAI 99.5FM IN NEW YORK CITY
AND LIKE THE SHOW ON FACEBOOK