I had to smile when a colleague emailed that she had to work from home that day because she needed to wait for the plumber. She's a virgin home owner, which is to say that when she and her husband bought their first house just a few months ago, she hadn't a clue what bidding adieu to a landlord meant. Mostly what it means is that you spend a lot of time waiting for plumbers.

I have a long-standing relationship with my plumber. I have this relationship, in part, because I have a septic tank and teenagers who enjoy liberal use of triple-ply toilet paper. I long for the good old days when TP was something that adorned trees at Halloween instead of my kids using half a roll of it per bathroom visit.

Another reason my plumber and I are close is hair conditioner. We use it. I won't mention the face cleanser with the little ground up beads that the FDA or someone just banned, but I use that too. Each of these scum-causing, drain-clogging beauty products is good for a couple of plumbing house calls a year.

Hair: that's another big ticket item that brings my plumber and I close. Every member of my family, save my husband, has it (hair) and we apparently shed a fair amount of it every time we shower.

Yes, I have clogged toilets and drains; a hot water heater that makes noises when nobody but me is home to hear it; and a septic tank that does what septic tanks do, which is make you yearn for city sewers.

Of all the various servicemen who come to my house on repair calls, it is my plumber who is the most interesting. (Our former electrician with the image of his dead dog tattooed on his leg was interesting, but in a different way.) My plumber, well, he's like the relief pitcher that comes in to win the big game. When the plumber is coming, I join the dogs -- our ears perked up waiting for the sound of his truck coming up the driveway, our eyes glued to the door, waiting for him to walk through it so we can pounce. Our joy that he is finally there is tangible and we are so glad he's "home" that we wouldn't dream of showing attitude about what took him so long to get there.

The plumber we had in our previous house would often not show up on the day of the appointment. When he did come, he always left a tool or two behind. I came to see this as a dog marking his territory; my husband said it just spoke to our plumber's conviction that he would be returning shortly to fix something else. For sure it served as an explanation of why he often didn't come on the day of the appointment: He was busy driving around collecting his tools.

I actually like my new plumber much more than the guy who forgot his tools all the time. I would never in a million years write about either plumber negatively in a Yelp review. But there is something I don't understand: If it's possible for a reporter to get where she has to be to interview someone at a certain time, why is that not possible for a plumber? We both have the uncertainty of traffic and not knowing what awaits us on the other end.

I remember once as a cub reporter being sent over to a family's house to ask for a photo of their son who had just died tragically. I walked in and while suspicious of me at first, the grief-stricken Mom began to tell me stories of her son's life. To cut her off and leave would have been rude so I sat there for two hours listening. When the doorbell rang for a floral delivery, I made my break.

"You've been so kind to stay and listen to me," the Mom said. "Thank you for that."

So every time the plumber is late, I just envision that the customer ahead of me must have needed him to listen. And if you don't think talking to the plumber is cathartic, you just haven't owned a home long enough.

Who's My Main Man? My Plumber, Of Course
Downsizing 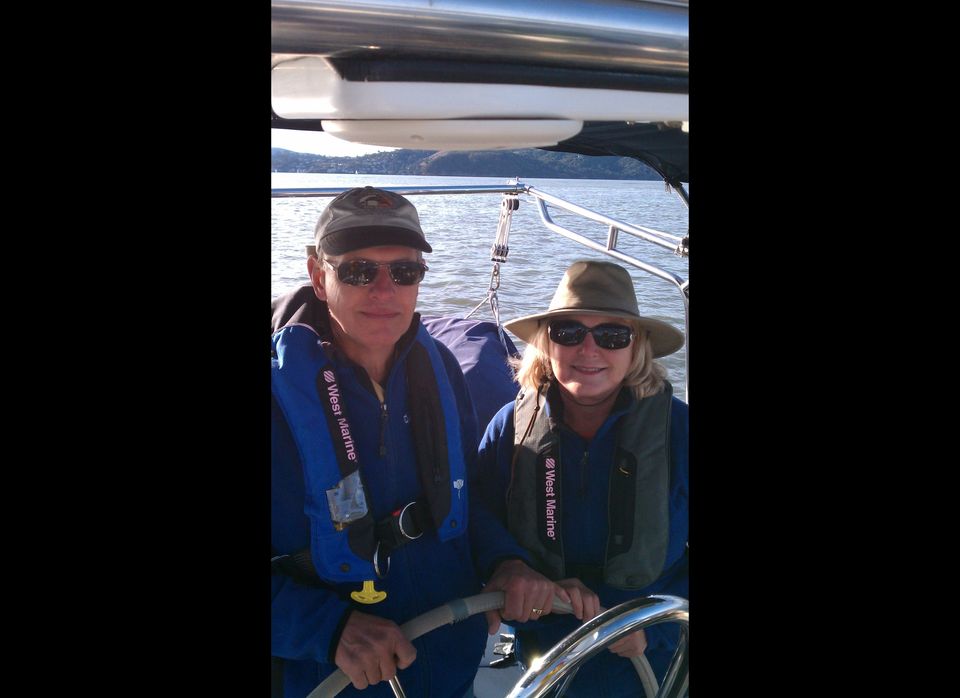 1 / 16
Ginger and Steve Penny sailing on their 38-foot Hunter, Windfall. The couple is downsizing from a 2,500-square-foot home to a 52-foot boat.
Ginger Penny