There is said to be a pensions crisis in Europe and North America. Governments are exhorting young people to think about their future because they are simply not saving enough to keep themselves in their old age.

Frankly, I think it is the governments we need to worry about, not the young people. If politicians think someone of 30 can confidently invest for 35 years and then rely on financial institutions still being around to pay out on pensions in 2050, they are being wildly optimistic. Talk to insiders in the institutions themselves, particularly insurance companies, and they are doubtful they will be able to deliver.

But it is not just in pensions that we are fooling ourselves. All across the industrialized world the majority of companies act as if society is going to continue as it has for the last century. Generally, they believe the economy will expand, trade will increase, wages will rise and we will all get richer.

There are a few governments, some companies and more and more people of all ages who realise this is not so. The economic model must be rapidly changed or we will face drastic consequences that will change it for us.

This need not make us depressed. These changes mean we are in for exciting times. For all of us there is a moment when we stop thinking of climate change as some far off threat -- maybe to be tackled by our children -- and realize that it is a current danger. In England this summer it came to thousands whose homes were flooded in freak rains. In the United States to some it was Hurricane Katrina. Most of the population is still in denial.

I was once unconvinced. Twenty years ago I was an environmental reporter who started writing about climate change as just another story. Now I can see it is a matter of life or death for the next generation.

For my wife, Maureen, a historian, who had long been a global warming skeptic, the revelation came while sitting in a pew of St Mark's Cathedral in Venice. We were listening to the haunting sounds of a choir when we suddenly became aware that the tide was coming up through the mosaics on the floor in tiny fountains of water. My wife was horrified that this ancient and beautiful city was going to go under because of sea level rise. Climate change suddenly became real for her too.

In the preoccupation of day-to-day living it is easy to forget what global warming means to the human race. For low lying island countries, the Maldives for example, it means the end. The entire country of more than 200 islands will disappear beneath the sea this century. For some of our children the only proof that the country ever existed will be our snaps taken on that dream sun, sand and snorkeling holiday.

So when I read climate skeptics in our papers and hear them on the radio, I wonder what their motives are. There are some regulars who have been exposed in the past as being paid by the fossil fuel lobby to protect their financial interests by touring the world pouring scorn on the science of climate change. There are others, who as professional pundits, see an easy way of making a name for themselves, and there are still a few, very few, scientists who have some doubts about how quickly the climate is changing.

But the odd thing is that climate change is also an opportunity. Why not drive a silent non-polluting electric car to take your children to school, use green electricity, and take the train? We just have to see life differently, be prepared to adapt to survive, not just for ourselves but for the entire community. My daughter, having heard government exhortations, asked me whether she should save for a pension. I said that in my view in 30 years the world will have changed so utterly and catastrophically it will be remarkable if any of the financial institutions to which she trusted her savings will exist.

Much better to save her money in order to look for a plot of fertile land well above sea level for retirement to grow healthy vegetables. By that time in England, she should be able to produce grapes for wine and fruit like oranges, lemons and bananas. Ideally, she should save enough to make sure the plot is large enough to grow a few trees for fuel and if possible contain a stream. This could be dammed for a trout lake and to provide water-power for a small scale hydro-power station for her extra power needs. In fact, I thought it was such a good idea I am looking for a suitable plot myself.

Images from Global Warning: The Last Chance for Change 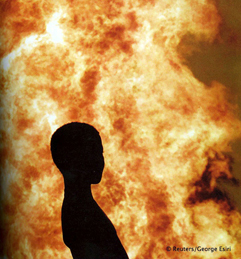 Flaring gas is one of the most controversial activities in the middle of an oil field, because it is a relatively clean fossil fuel that could be captured and sold rather than burned. A Nigerian child is silhouetted against a gas flare at the Shell Utorogu facility In Nigeria's southwest delta in 2004. This was token on the some day that Nigerian troops dislodged hundreds of protesters. They hod blocked access to Shell's facilities in the delta region and threatened to shut in 100,000 barrels of crude-oil output. 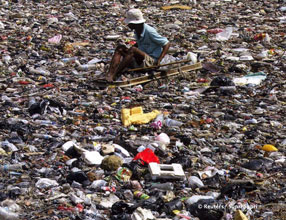 This Indonesian scavenger has token to a raft in a garbage-laden canal in Jakarta on World Environment Day in June 2003. Many of Indonesia's impoverished live on the banks at the city's canals, which overflow during the rainy season.

The capital of the Maldives, Male, is home to a nation with a rich heritage dating back over two millennia. Today the government is battling with the problem of sea-level rise by fortifying a number of islands against the sea as safe havens when storm surges threaten.