Many people take their ability to think for granted. For some people, thinking seems to happen automatically. Others struggle to understand a concept. Sarah Palin and Christine O'Donnell often seem defiantly proud of their ability to demonstrate that ignorance is bliss.

A tiny percentage of the earth's population focuses its attention on topics like neural networks, the chemical or electrical functions of a synapse, or how to recreate a particular thought process. While overt displays of intelligence can scare some people away, real and/or artificial intelligence are constant sources of fascination.

For a child learning to talk (or a stroke patient who is relearning how to walk), the way the brain functions remains a total mystery. But for people who have enjoyed years of intelligent life, losing their cognitive abilities, discovering that their brains do not function properly, or descending into dementia of the Alzheimer's type can be terrifying.

Not too many people get the chance to document their mental illness. However, Bud Clayman (who suffers from Asperger's syndrome) has made a discomforting film which, although it might not seem great by film school standards, represents a remarkable achievement for the filmmaker.

Billed as "The Obsessive Compulsive Major Depression Bipolar Asperger's Movie," OC87 is very much about a life interrupted. As a teenager, Bud Clayman's goal was to become a filmmaker. However, as his mental illness grew and deepened, filmmaking became a distant dream. As Clayman explains:

"This is a film about coping. It is a film about learning to live with oneself in the real world. My name is Bud Clayman and I am one of the directors of OC87. The title OC87 refers to a state I was in in 1987 when I tried to control my whole world. I literally tried to be independent of everyone and everything around me. If someone would go to make small talk with me, I would remain silent. If someone would try to help me, I would refuse that help.

This film is my coming out party, so to say. It is a rebirth for me which I think everybody should have. It is a letting go of the shackles and demons that have haunted me most of my life. It is my personal liberation. The challenges on this film have been many, both good and bad. Learning to manage other people, working in a cooperative manner with others, and asserting my creative vision with people who have, by far, many more years of experience at this than I do have been difficult for me. But succeeding at these things and gaining my power both as a person and then as an artist have been the most satisfying for me.

Ironically, 22 years from when my former so-called independence started, because of this film I am now interdependent with people. Everyone on this film and everyone around me have helped me grow and mature as a human being. They have helped me begin to love and learn from life again. Isn't that what it's all about?" 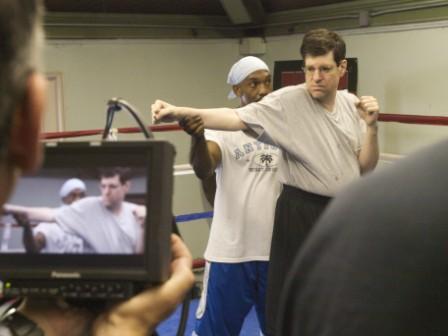 Bud Clayman gets a boxing lesson


OC87 helps to explain the emotional pain someone like Clayman suffers from obsessing over poor judgments, inappropriate statements, and moments that would otherwise roll off a normal person's back. It is a film in which a grown man reacts to some situations like a child, dreads regressing from the progress he has made, and continually struggles to rejoin the human race.

While I salute Clayman's courage in using the documentary format as a form of therapy to produce a film of surprising intimacy, OC87 is not always easy to watch. Here's the trailer:

In Penance, a short film by Ryan Gould, the audience meets a bitter middle-aged man who owns a small landscaping business. Caleb (Michael Cullen) has just landed himself in a heap of trouble.

After spending time in jail for an incident that may have been related to his son's untimely death, Caleb has struggled to win back a place in the community. When an autistic youth named Dennis (Raymond McAnally) answers Caleb's want ad for someone with experience mowing lawns, Caleb must cope with the signs and symptoms of Asperger's syndrome that can quickly overpower the young man.

Caught between his own high levels of testosterone and Dennis's autistic behavior, Caleb tries to force Dennis to live up to his responsibilities. But it's not easy going for Caleb, who quickly loses his other assistant and gets grief from a neighborhood woman whom Dennis has crudely insulted. When Jimmy (Khan Bakyal) -- a young man whom Caleb suspects is a bad influence on Dennis -- continues to push the older man's buttons, all hell breaks loose.

Penance offers Cullen and McAnally some prime acting opportunities, even if it never clarifies which is the bigger problem: the young man's autism or the older man's inability to manage his anger. The dramatic tension is immeasurably enhanced by Malcolm Kirby, Jr.'s original score. Here's a sampling of scenes:

Not every script in which a character has Asperger's is depressing. In an odd way, the behavioral syndrome can offer opportunities to create scenes of great poignancy and occasional comedy. For some people, making the first step toward connecting with another human being can be absolutely terrifying. On opening night of the 2010 San Francisco Fringe Festival, a 40-minute dramedy by George Pfirrmann entitled Arousal tackled this age-old dramatic situation from a new and erotically charged perspective.

Albena is an immigrant from the Ukraine who has settled into a studio apartment in San Francisco's Richmond District (which has a large Russian-speaking population). She rarely goes out, preferring to order in meals that can be delivered. Albena manages her life very carefully with her computer and cell phone.

Kissing, however, is strictly off limits.

Albena also has a curious tendency to categorize any questionable word uttered by a client as good or bad depending on how many points it will score in Scrabble ("Lonely? Is very bad word! All single point letters except for the Y!").

Enter Clifford, a 24-year-old man with Asperger's syndrome who was homeschooled by his devoted single mother. Over the years, Clifford had found himself struggling to make conversation with people. All too often, he would say something that alienated or offended them. Largely due to his Asperger's, he was unable to understand what he had said or done that caused people to flee.

Even though Clifford is a grown man, he has never had any kind of sexual contact with a woman. However, after his mother's recent death, he has suddenly found himself without any friends.

Clifford is desperate for affection, tenderness, and someone with whom he can feel comfortable. While trying to find an escape from his crushing loneliness, he spent some time browsing through the personal ads on Craigslist, where he came across an ad from a woman who offered to be "a special friend."Arousal is all about how Clifford and Albena work through their communications issues to overcome their common problem: intense loneliness. 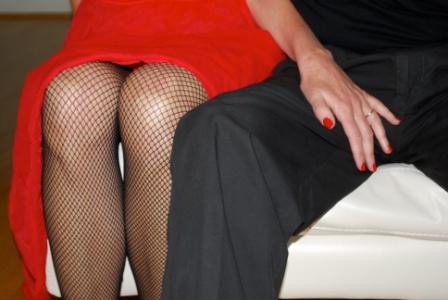 Albena and Clifford in Arousal (Photo by: Ralph Wilson)


Playwright George Pfirrmann's other career as a licensed clinical social worker has obviously helped him in shaping two textured characters with surprising emotional depth. Joe Weatherby directed this beautiful and wise one-act play with equal attention to its bawdy humor and moments of tenderness. Sally Dana and Danny Krueger gave two finely-tuned performances in a poignant piece whose combination of comedy and pathos make it a wonderful (and exceptionally cost-effective) curtain raiser for any double bill.