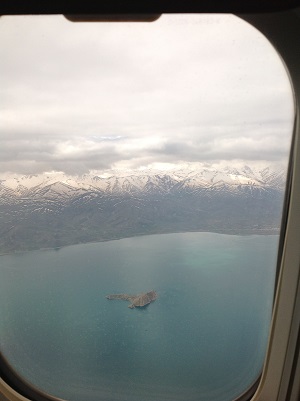 Shocked by its beauty, as the plane landed into the city of Van, in the southeastern region of Turkey, we were engulfed by the bluest of blue water from the lake and snowcapped mountains. On our airplane, Dayle Haddon, UNICEF ambassador and founder of WomenOne, and I were accompanied by only two other women on the plane. Men surrounded us, wearing gray and black colored clothes. As we stopped to take pictures of the intense scenery, people stopped to stare at what they thought were two funny foreigners. We would soon learn that beauty was a theme in this city.

Dayle and I were visiting Hisar Anadolu Destekleme Dernegi's (HADD) workshops where young girls weaved kilims and took home schooling courses. HADD builds their workshops in poor slums in the outskirts of the cities where the girls have the least opportunities. These slums were created when village residents in the southeast were forced to migrate to Van. Due to the large influx of migrants, job opportunities became scarce and poverty became a huge issue for these migrants. In the first slum we visited, the prefabricated building was surrounded by stone homes that seemed to be overflowing with children. Children were running on the side of the road, they were hanging out of windows, jumping out of cars and being downright mischievous. One thing was for sure, was that they were not in school. Mothers and fathers were nowhere in sight, as their girls and boys pranced around town.

The workshop housed about 20 girls, who each weaved on her own kilim. Some girls were beginners, and would make multiple small kilims to practice. Some girls were advanced and were making kilims for international orders. Their ages ranged from about 14-18 in this room. Dayle's first question was "Do you ever get bored weaving all day?" They answered, "never." Smart and resourceful, they are using henna on their hands to keep their fingers from hurting, as the constant rubbing against the strings can cause callouses. Each kilim was like a musical instrument with its hundreds of strings and the girls mastered the art of tossing the wool through the machine thousands of times, looping and twisting, then pounding the wool down to tighten the weave. The sounds echoed in the room as the hard workers barely stopped to greet their foreign guests. All of the girls concentrated deeply on their work. A rhythmic flow of movement set a very calm tone to the room. The kilims were stunning. The most beautiful pieces of art were being handmade here in Van by young girls, struggling to give themselves and their families better lives.

Initially, I walked up to each girl, one by one, asking their name, age and how long they had been working in the workshop. As Turkish Philanthropy Funds had just finished building this particular building, they were mostly relatively fresh to the trade. Although, after just five or six months, these girls were selling kilims internationally and showing work in well-known galleries in Istanbul and abroad. The girls were quick to share with me how many siblings they had in their families and how many people lived in their home. An average home seemed to consist of about 20 people living under one roof. Some of the girls were already married, but most of them were not. Their message to me was clear, if they were not weaving and attending school, they would be married with at least two children by now. But the exact opposite has happened; they are working and educating themselves. Most of the girls weaving in this workshop are the sole breadwinners in their family. That means one 16-year-old girl, could be working to support up to 20 mouths. Dayle and I were eager as ever to see these homes first hand.

The girls eventually left their looms and gathered around Dayle and I, as we showed pictures of New York, our families and my dog. After we finished our meeting of us asking questions and the girls asking twice as many more, we said our long goodbyes and were escorted by a 19-year-old girl named Sermine. She was willing to walk us to her nearby home and show us what it was like living in her village. We walked behind the building, over a make-shift bridge (made of one wooden board) and past a few stray chickens. Around a few more stone buildings, we arrived to a two-story home that Sermine called her own. We were welcomed by her mother, who only spoke Kurdish, followed by three other children, into the main living, eating and sleeping area. There was a baby rocking in a bassinet, under a thick blanket. In this room (probably 12'x15') Serife, her husband, their baby, Serife's brother and his wife and child all sleep. 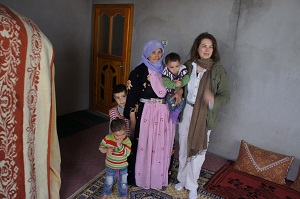 There were no beds, just piled up mattresses. There was no kitchen table, just a rug in the center of the room. There was no TV, just a radio in the corner. The rest of the house was inhabited by her mother and father and extended family. It was in that moment, I realized why Serife was working so hard to finish weaving her rug. With the money she could earn, and the education she could obtain, she could build a better life for her family. Her eyes had been opened to greater possibilities, as had all the other girls in the workshop. Their lives no longer just meant living to survive, but living to succeed. Serife translated to me that her mother said she was very proud of her for working hard and studying. Her mother said it was an opportunity that she was never given and is ecstatic that Serife can make a better life for herself.

As we walked out of her home, I was struck with awe of her living conditions. Refreshingly, at the end of the day these girls, even though they are acting mature beyond their years, are overcoming profound obstacles and are setting the path for girls in their communities for years to come, they are still young girls at heart. When we asked the first thing the girls want to buy with their hard earned money, their answer was phone credit.

Melis has been touring Turkey visiting women empowerment projects around the country. Follow her and UNICEF Ambassador, Dayle Haddon, via #WomenOnAMission