Maybe they should just admit that Bigfoot doesn't exist.

After decades of debate, speculation, anecdotes, eyewitness testimony, photographs, films and videos, the hunt continues and true believers haven't given up hope.

The above image is one frame from what is known as the Patterson-Gimlin film, considered the most controversial and debated footage that purports to show a creature walking through woods near Bluff Creek, California, in 1967.

After six seasons investigating Bigfoot/Sasquatch reports in 40 states and six countries on Animal Planet's"Finding Bigfoot," a team of four hunters -- believers and skeptic -- is still looking for the hairy legend.

"One thing I've always felt was a problem with the show is that we set up this false expectation that somehow we were going to meet up with the Bigfoot and end up holding hands with him and pow-wowing or handcufffing one and putting him in our trunk," Moneymaker told The Huffington Post.

Moneymaker believes the team has had some close calls with Bigfoot. Of course, others would say that he is a victim of wishful thinking,

"We've gotten close enough to them to hear them on many occasions and to get sound recordings. And we've shown video tapes that other people have gotten of them. Some of those pieces of video footage we didn't know if they were legit until we actually went to the location. But we haven't gotten video footage of them ourselves during the course of the show."

The Bigfoot hunters talk with executive producer Keith Hoffman about their ups and downs after six seasons of looking for their quarry:

Moneymaker and his team use military-type night vision and thermal imaging technology to help them look for tall, hairy, human-like animals in the wilderness. And through it all, he's never really liked the name of their show.

"The idea of finding them -- what exactly do you mean by finding? I never wanted to use that word. I didn't like the whole title of the show because it implies that you find it like finding a penny on the sidewalk. That's not the way it is with these things.

"If you're close enough to hear them, or sometimes you get close enough to see them, you're certainly not going to capture one. And even if we were going around with guns to try and shoot one, you wouldn't have much opportunity to do that because they'd be gone before you could raise the gun."

While detailed maps have been created showing the saturation of Bigfoot reports in the United States, Sunday's sixth season finale of "Finding Bigfoot" concentrated on what Moneymaker says is a consistent hot spot.

"The finale [took] us to a place that's basically the mecca of Bigfoot sightings in the Northeast. It's right on the New York and Vermont border at the bottom end of Lake Champlain. Whitehall, New York (see map below), is a place where even the local city government and police departments are not shy about saying there have been Bigfoots sighted around there." 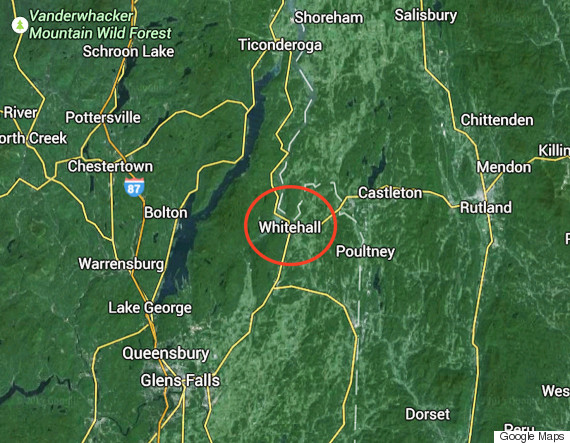 In 2004, following several Bigfoot sightings near Whitehall, the town created an ordinance, prohibiting the hunting of the alleged creature within the town limits.

"The resolution is formally titled the Dr. Warren L. Cook Sasquatch Protective Ordinance. If you were planning a Bigfoot hunting expedition in the village anytime soon, you're out of luck," according to the Post-Star.

Here's the actual 2004 Whitehall, New York, Bigfoot ordinance. Keep in mind, all of this was done about a creature or animal that hasn't even been acknowledged by the international scientific community: 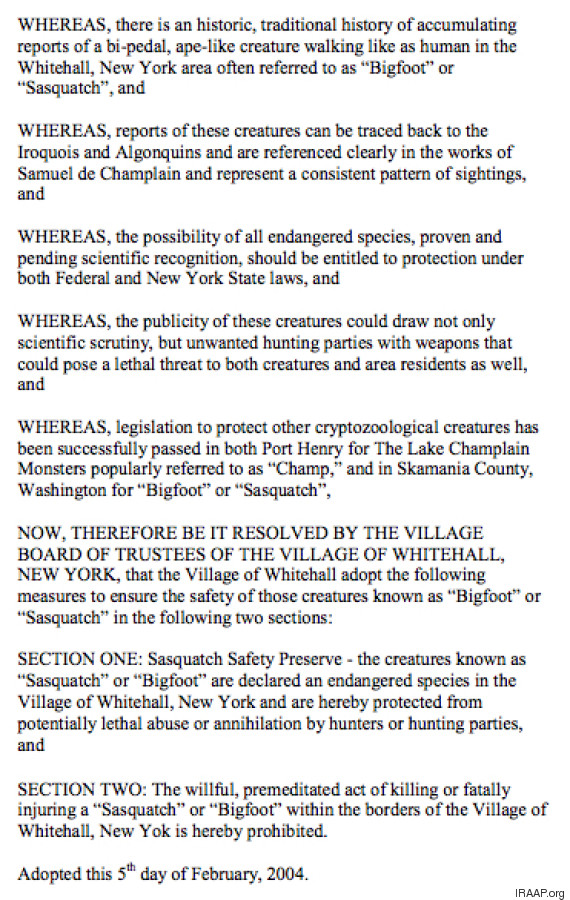 Watch this trailer for the 'Finding Bigfoot' season finale