Some cancers still cannot be successfully treated with chemotherapy, but a group of researchers is finding alternatives in plants, marine organisms and fungi. This group of more than 25 researchers from four continents is in the race to develop drugs that work in drug-resistant forms of cancer, and in cancers that are too advanced to respond to conventional forms of treatment. Over a decade after his initial collaboration with Robert Kiss at the Free University of Brussels in Belgium and Antonio Evidente at the University of Naples Federico II in Italy, Alexander Kornienko from Texas State University in the US, has hopes for one of the group's discoveries to enter clinical trials soon.


You can follow the group and their progress in their project on ResearchGate.


ResearchGate: Why are there cancers that don't respond to chemotherapy?

Alexander Kornienko: There are a number of cancers that have what is known as an intrinsic resistance to chemotherapeutic agents. Usually these cancers have a dismal prognosis. This is the case for a brain cancer called glioblastoma, the most lethal type of cancer. Pancreatic cancer, melanoma and non-small cell lung cancer are other cancers that don't respond to current types of chemotherapy. The reason is that most chemotherapeutic agents today work by inducing a particular type of cell death called apoptosis. But these cancers have defects in the apoptopic machinery, which means they cannot execute this programmed cell death.

Apoptosis is the best-established and most studied type of cell death. It is very important for any kind of physiological process. Our tissues undergo constant remodeling. As some cells are born, other cells must die to create space. Those that must die, die through apoptosis. Typical chemotherapeutic agents initiate this type of cell death to kill cancer cells as well.

RG: Once a tumor spreads, it's also hard to fight it with the chemotherapeutic agents we have today. Why is that?

Kornienko: Cancer metastases are also resistant to chemotherapy because of their resistance to anoikis. Anoikis is apoptotic cell death that is normally initiated when a cell detaches from other cells or from the extracellular matrix. However, cancer cells that detach from the tissue to find a distant site for metastatic growth have been able to overcome anoikis and thus have gained resistance to apoptosis-inducing chemotherapy. These resistant cells will detach and migrate to other organs and grow metastases unhindered.

RG: What are you doing about this?

Kornienko: Our group is exploring and evaluating natural products that induce types of cell death other than apoptosis. We focus on known natural products, as well as on the exploration of new natural products that have not been previously reported. It's a dual-targeted approach from many angles. We have a number of natural products chemists who are primarily located in Italy. One of the leading scientists of our team is Antonio Evidente at the University of Naples Federico II in Italy. He provides us with natural compounds from plants and fungi. Other colleagues like Vassilios Roussis from the National and Kapodistrian University of Athens, Greece provide us with natural products isolated from marine algae and Margherita Gavagnin from the CNR in Naples, Italy provides us with marine invertebrates. Most of these natural products are then evaluated by Robert Kiss' team at the Free University of Brussels where they work with cancer biologists and clinicians with particular expertise in treating brain cancer. In this team there is also a neurosurgeon, Florence Lefranc, who works with glioblastoma patients on a daily basis. My team at Texas State University modifies the structure of natural products to optimize their activity. Helen Townley at Oxford University is a specialist of nanodelivery vehicles.

"In the last decade a large number of new natural products with anticancer activities have been discovered."

RG: What have you found?

Kornienko: In the last decade a large number of new natural products with anticancer activities have been discovered. These natural products are isolated from plants, fungi and marine organisms, and many of them fight cancer cells through mechanisms other than apoptosis. One of these alternative types of cell deaths is autophagy, which in Greek means "self-eating." When a cell undergoes starvation and does not get enough nutrients, it will start eating itself to survive. It starts to consume its own organelles or proteins to generate energy. This is a protective response, but at a certain point when the starvation is prolonged, the cell crosses a point of no return and will start to consume vital organelles.

There are ways to induce this type of cell death with small molecules. These compounds hijack the cellular pathways that start autophagy and induce prolonged autophagy. The cell is deceived by these agents and thinks there are no nutrients. Then it eventually dies. One agent that induces autophagy is temozolomide. Temozolomide is a synthetic compound and currently the only agent that prolongs the lives of patients with glioblastoma. We have found what looks like a natural alternative to temozolomide.

Kornienko: This project deals with another form of programmed cell death called paraptosis. Paraptosis is characterized by a process of cytoplasmic vacuolization, in which the number of vacuoles in a cell grows to the extreme to the point where the cell cannot recover and eventually bursts open and dies. The specific pathways of paraptosis are not as well-known as in apoptosis because it has only recently been discovered, 15 years ago.

We found that ophiobolin A, a fungal metabolite isolated from phyto-pathogenic fungi -- fungi that infect plants -- induces paraptosis, specifically in glioblastoma cells. These cells don't die from modern chemotherapy, but they die from ophiobolin A. We published a number of papers on this finding where we describe how this agent works against cancer cells in culture and in mice. We created what is called an orthotopic mouse model by injecting human glioblastoma cells into the brain of the mice. Ophiobolin A extended the life of these mice, proving that it works in the living animal. 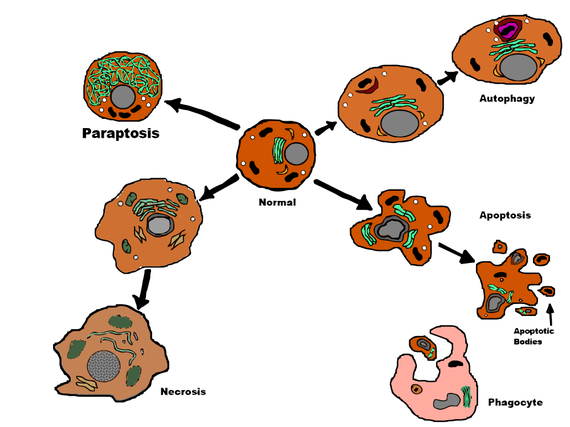 RG: What needs to happen next so you can see whether ophiobolin A also works in humans?

Kornienko: There are still a number of hurdles that have to be overcome. One is that ophiobolin A is somewhat unstable. My group is working to come up with derivatives or analogues that retain this kind of cell death inducing activity but are more stable.

Another challenge is making it pass the blood brain barrier, a very thick structure that protects the brain from undesired molecules. Many drugs fall at the last hurdle here, not only drugs against cancer, but also against Alzheimer's or Parkinson's disease. Helen Townley at the University of Oxford on our team, is working on the development of such nanovehicles which transport ophiobolin A as cargo across the blood brain barrier into the brain.

RG: Which natural compound is closest to clinical trials?

Kornienko: We are also working on a family of natural products that are isolated from daffodils. Daffodils have been known for their toxic properties for centuries. In fact, not just for centuries. The anticancer properties of daffodils were already known to Hippocrates. Hippocrates of Cos lived in the 4th century BC and used the extracts from daffodils (narcissus) to treat uterine cancer. More recently a number of anticancer constituents of daffodils have been isolated. Our group found that these compounds are able to induce growth inhibition in cancer cells that are resistant to apoptosis.

"The anticancer properties of daffodils were already known to Hippocrates."

RG: How do these compounds work exactly?

Kornienko: The daffodil compounds which we investigated are called narciclasine, lycorine and haemanthamine. These agents do not induce cell death at all. They use growth inhibition; they arrest cell growth. We think that these agents work by rigidifying the actin cytoskeleton in cancer cells.

Any cell has structures that are comparable to bones and muscles, just like the human body. The bones are microtubules. The actin cytoskeleton forms the muscles. When a cancer cell migrates to form metastases it has to be able to squeeze in between other cells to make its way out of the tissue and into the blood vessel. To be able to squeeze like that, the cell has to change its shape. It uses its actin cytoskeleton -- the muscles -- to do that.

The daffodil agents rigidify the actin cytoskeleton. This way the cell cannot divide and cannot migrate and, ultimately, it will die. Again, because these agents do not induce apoptosis, they are active against different types of cancer which are resistant to apoptosis, like glioblastoma and melanoma. And because cancer cells rely on the high activity of the actin cytoskeleton, these compounds leave normal cells alone. We recently published a paper about the use of narciclasine to inhibit the growth of melanoma cells in cell culture, as well as in mice.

RG: What are your hopes for these compounds?

Kornienko: We hope that one of these agents will work and eventually make it to human clinical trials, hopefully all the way to the regulatory approval. We're close to clinical trials with narciclasine. What we really need to do is develop nanodelivery vehicles for this agent. Narciclasine is not soluble in water, which is a challenge we need to address. If you can't dissolve it, you can't deliver it easily -- this is one of the killer issues in drug discovery. Nanovectorization of this agent should not only solve the solubility problem but also improve its delivery to the brain.

We are very open to collaboration with fellow scientists who share our views on cancer drug discovery. We are particularly interested in investigating natural products that have the ability to overcome cancer cell resistance to chemotherapy and especially those with non-apoptotic mechanisms of fighting cancer proliferation. We believe that this research has the potential to be the next breakthrough in the treatment of cancers resistant to chemotherapy.