Few experiences produce anxiety much like washing your hands in water that you know can poison you. I'm watching a natural resource cum natural hazard spill over my hands from a tap in Salem Lutheran Church (ELCA) in Flint, Michigan. Like many other buildings and homes, the church has lead in its water -- water it has used for drinking, cooking and baptizing infants. Before my meeting with Pastor Monica Villarreal of Salem, I had stopped by a downtown coffeeshop for an iced tea, something I do far too often in my own city without batting an eye. But here in Flint, even this simple act carries with it pit-of-the-gut worry. It's one thing to trust that your barista has put enough milk in your latte. It's quite another to trust her when she tells you the water is safe.

Flint bears all the marks of any number of Midwestern towns abandoned by manufacturing firms in search of cheap labor. Liquor stores dot barren blocks. Once-proud homes loom in disrepair from untended lots. Violent crime is a regular experience. (The reputation of one liquor store near the church is so bad that local residents sardonically say that the initials in its name stand for "Death and Homicide Liquors.") And a river runs through it. A river filled with bacteria and, now, so corrosive it can damage pipes and car parts. 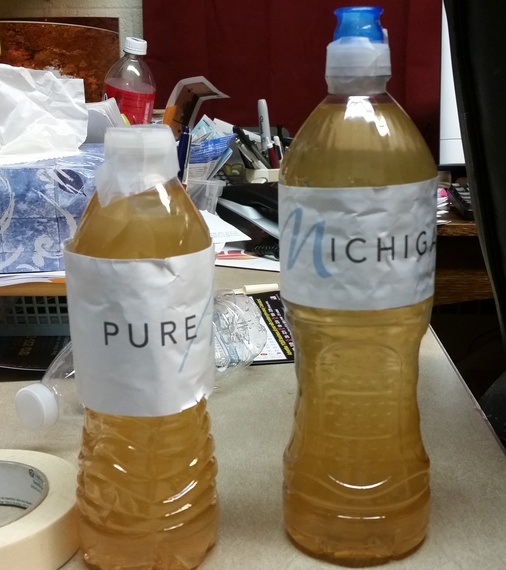 In politics as in war, the first casualty is truth. Finding reliable information on the water crisis is difficult, even from reputable news sources. What we do know is this: people in power gambled with the lives of people in poverty and lost. When residents complained about the water, state officials from the Michigan Department of Environmental Quality responded with "aggressive dismissal, belittlement and attempts to discredit these efforts and the individuals involved," insisting that the water was safe.

The first "strategic goal" of the MDEQ is to "protect public health." They failed. Miserably. But no apology from state officials, no number of resignations will be enough. Those officials get to go home and drink clean, cheap water from their taps. The people of Flint are stuck paying for poison in their homes. The state leadership in Michigan was as corrosive as the Flint River, eroding trust and sowing fear as quickly as the water they provided corroded pipes and spread lead. This water was given to babies, infants, and children because people in power said it was safe.

My work with ELCA World Hunger, a ministry of the Evangelical Lutheran Church in America, has carried me to places of rural poverty in Iowa, drought-stricken neighborhoods in Central California, and the corrugated metal-covered homes of displaced people in Colombia in search of answers to the same two questions: Where is God? and Where is the Church?

As I sit in Pastor Villarreal's office holding a bottle of murky brown water drawn from the taps at Salem Lutheran, she tells me about the deep pain resonating throughout her neighborhood. She describes the guilt of parents who gave their children lead-filled water to drink, of the frustratingly slow state response, of the opportunistic lawyers and media now spilling into Flint.

But she also shows me a list of the congregations and individuals that have reached out to her with donations of time, money, water, and filters. She describes a young girl who was so moved by what she learned about access to water at the ELCA Youth Gathering in 2015 that when she heard about Flint, she felt called to help. I hear about churches working together to prepare truckloads of water to ship to Flint, plumbers and pipe-fitters offering their services pro bono.

Pastor Villarreal describes interfaith groups and ecumenical groups coming together to support the community, of Muslims, Methodists, Baptists, Lutherans, Catholics, and others in conversation and in partnership. I share the support that ELCA World Hunger will provide to Salem Lutheran for its food pantry, so that the church can provide for the new nutritional needs of lead-poisoned children.

And I have my answer. We may not be eating bread and wine at an altar or singing hymns, but here, in this office, this is Church in its most basic form -- a site of relief for those in need, a safe space to share dangerous stories of guilt and pain, and a place to unite to hold our leaders accountable when they fail to protect the well-being of all citizens.

Here, too, we are surrounded by weighty symbols -- the brown water and corroded pipes that symbolize injustice, and the donated water from across the state and letters of support from all over the nation that symbolize a community committed to not let that injustice stand. The icons here represent a community of neighbors that transcend boundaries to accompany one another.

It is impossible to miss the sacramental volatility of water, that medium that gives life and takes life. It encapsulates the irony of living in the Great Lake State without clean water to drink. It symbolizes both the life-giving grace of the created world and the death-dealing abuses of power that come when we silence and marginalize our neighbors. It is the touchpoint that knits together people across the spectrum of faiths and no-faith. It has become a rallying point for a community to come together.