Review of the book, Finding Our Families: The first-of-its-kind for donor-conceived people and their families by Wendy Kramer and Naomi Cahn, J.D. 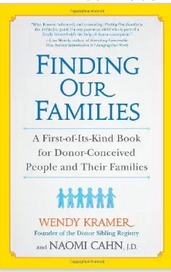 Finding Our Families is a treasure trove of compassionate advice designed to help those raising the more than an estimated million people who were conceived using so-called donor* sperm, the tens of thousands whose lives began with eggs of contributors, and thousands who were "adopted" frozen embryos, as well as the donors.

The 258-page book compiled by Wendy Kramer, the mother of a donor-conceived son and Naomi Cahn, family and reproductive law professor, helps blood-related kin navigate relationships unthought-of generations ago. The book offers how-to search assistance and suggests ways for the legal, social, and nurturing family to open their hearts and minds to those who contributed eggs, sperm, or embryos in addition to welcoming siblings who share the same or half genealogy.

Kramer and Cahn share the belief that donor-conceived children's desire to know their genetic family "must" be honored and provide sensitive and thoughtful help such as how and when to tell children about their conception with chapters directed to the donor offspring themselves to help them deal with their questions. It is also an invaluable guide for those considering anonymous conception assistance. The issues facing donor families are punctuated with quotes from donor conceived individuals' and their parents' experiences and feelings.

Kramer, along with her son Ryan, created the Donor Sibling Reunion Registry (DSR) initially to help them find Ryan's siblings and the man Ryan calls, quite simply, his father. Nearly 3000 matches were made before Ryan, 16 at the time, was connected with one of his siblings, a sister born three years to the day Ryan was born. The registry has more than 45,000 members and has been featured on 60-Minutes and The Oprah Winfrey Show. DSR literature is available in three languages as sperm from the US is sold internationally.

The similarities between stranger-assisted conceptions and adoption are undeniable, as recognized by the authors. As I wrote previously, infertility practitioners followed the model of adoption in which those becoming parents used to be told they never had to tell their children they were adopted. Birth certificates verify the lies which were intended for offspring to live in "blissful ignorance." In both cases, it was assumed the offspring would feel uncomfortable if they knew they were not genetically connected to one or more of the parents raising them and that if they did find out - which most eventually do - they would be grateful to be alive.

Yet adoptees have been searching since the 1940s when the records were sealed. Rather than, or in addition to, feeling thankful many feel betrayed and angry at being lied to. With adoption as a precursor, it is incomprehensible how stranger-assisted conception could replicate secrecy and thwart the strong human desire to know their closest ancestors who "begat" them.

Single moms, infertile heterosexual couples, and same-sex couples who use stranger assistance to conceive have chosen not to adopt, preferring to experience a child who is related to one of them, who might look like them or have their traits. It is ironic that the genetic connection is important to these parents yet many seem to disregard the importance of that connection to their child's other genetic progenitor. "If the desire for a biological connection is strong enough to make adults choose donor conception," say the authors, "then it is the ultimate double standard to imagine that the desire for biological connection will not be felt just a strongly by the donor conceived child....this natural curiosity should be supported by parents, by the fertility industry, and by the rest of us."

While the book's advice, the authors note, "is straightforward and simple to follow", it's not, they recognize, always easy. Kramer recognizes the difficulty of revealing the truth and in a DSR blog post she notes that parents can choose to act from fear or from love, putting the needs of their children before their own apprehensions.

Adoptive parents and those who used the sperm or eggs of others fear intrusion into their lives and their parenting. They have deep seated insecurities regarding the truth of the old adage that blood is thicker than water and that finding blood kin could lead to alienation of affection. But fear is said to be an acronym for: false evidence appearing real. Nelson Mandela said of fear, "Courage is not the absence of fear, but the triumph over it. The brave man is not he who does not feel afraid, but he who conquers that fear."

Parenting requires the strength to push through such fears in order to do what is in your child's best interest if for no other reason than for them to obtain a complete family medical history. Having no, or worse false, medical history can be life threatening. Additionally, both adoptees - and more so donor offspring - risk dating or even marrying a sibling as sperm donors have been known to provide sperm for hundreds of births.

The authors note that "the end result of the overwhelming urge to have a baby is not just a baby; it's a human being, whose healthy development involves phases of self-definition and endless questions....the search for answers may end up consuming ...blank spaces in your story may fill up with pain." They intend for this book to help prevent as much of that pain as possible and also to provide a "strong voice in the movement to discourage secrecy and promote disclosure."

In the final chapter Kramer and Cahn address reforms needed within the American reproductive medical industry suggesting they could "play a significant role" in facilitating matches and also helping parents-to-be understand the need for honesty. The authors recommend mandatory counseling for donors and prospective parents, mandatory medical and genetic testing of donors, and requiring donors to update their medical history. They call for tracking and national data bases for all donors and births as well as setting a limit on the number of births per donor. The authors call for studies into the long-term consequences of donor conception "particularly on egg-donor's health."

Of course, the problem is who is going to put these excellent suggestions in place? One further recommendation I would add is that all infertility practitioners and facilitators should be providing a copy of this book to their clients to read.

Kramer and Cahn quite emphatically believe "that knowing about your origins is not only an innate desire but a right." Their radical position is not shared by all who have benefited from anonymous reproduction or hope to. Many are concerned that outlawing anonymous genetic contributions will reduce the number of donors as they believe happened in the UK. DSR however has gathered data that proves no such decline.

*NOTE: In writing this, I have used the "D-words": "donor," "donated," and "donation" in regard to conception that utilizes sperm purchased from sperm banks and eggs purchased and implanted at infertility facilities. The oxymoronic use of the word donor is thus an ingenuous misnomer in the majority of cases that involve the buying and selling of these precursors of life.

Donor is, however, the language used in the infertility industry as well as by the media and those who comprise what is known as the donor community likely because it softens the commercialization of the process and makes the conception process sound warm, fuzzy, and gregarious instead of the business transaction it is. Make no mistake though, sperm, eggs, and embryos are commodities that are bought and sold in a multi-billion dollar industry. Educated, upwardly mobile men and women are highly sought for their eggs and sperm and many have financed their higher educations by selling sperm and eggs, some fathering hundreds of children.