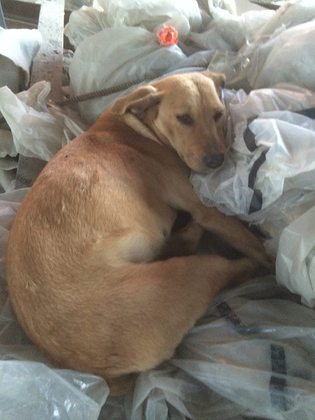 There she was. Sleeping in a pile of trash, which was far more comfortable than concrete. She'd rummage through debris, desperately trying to find something to eat. The three puppies she was looking after weren't doing well. In fact, one was so skinny he became known as "Bones." They were sneezing. Their eyes were infected, but she'd do everything she could to keep them clean. Her name is Fisht, a mixed-breed dog between 1 and 2 years old, and her tale takes the gold medal for survival.

When Denver native Neil Dreher, 36, went to work as an Automation Operator for the Olympics in Sochi last November, he never expected he'd hold the fate of Fisht in his hands. When he arrived, the construction for the Olympic site was well behind schedule, but the one thing he observed from his first day on the job was the overwhelming number of stray dogs.

"There were many of them around the site," Dreher said from Sochi. "Most were in small groups, a couple large packs and a few solo dogs. Almost all of them were really approachable and kind --loving to be petted and fed, of course. They were also in an array of health, from very well fed and in great shape to very frail and malnourished."

Before the opening ceremonies took place on Feb. 7, local authorities went through and killed stray dogs in attempt to beautify the city for the Olympics. It's nothing new. Stray dogs were also an issue in Athens when they hosted the summer Olympics in 2004. When it was reported authorities in Sochi were going to round up strays and kill them, Humane Society International got involved.

"We wrote to them and alerted our supporters, and they quickly announced that they would not proceed with the plan," Andrew Rowan, President and CEO of Humane Society International, said. "Therefore, it was a surprise when it was announced late last year that they were going ahead with a street dog cull. The private contractor did not help when he referred to the dogs as 'biological trash'."

According to a New York Times article, local animal rights workers said many of the stray dogs in Sochi were once pets abandoned by families whose homes were demolished over the past few years to make way for the Olympic venues. While they were compensated with new apartments, keeping their pets was not always an option. Rowan said he has seen estimates that up to 4,000 dogs may have been killed, but noted that no one has a good idea of an actual number.

Fisht, named after the Olympic stadium, managed to escape the dog call. From the moment Dreher saw her, he felt a connection. She was distant at first, but within a few days she was visiting Dreher and other workers every morning. Eventually when Dreher was moved inside to work, which was nothing more than an open doorway of a shipping container, he was able to provide food and small heater to keep Fisht and her puppies warm. 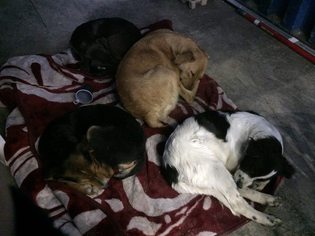 Although Dreher was eager to help, he was repeatedly told to leave the stray dogs alone. It didn't deter him. One day after work he and his co-workers piled into a cab and took the dogs to the vet. Since initially finding Fisht and her three puppies, one had disappeared and sadly, the two other puppies were in such poor health nothing could be done to save them. They were euthanized.

"It was a really devastating moment," Dreher recalled.

But Fisht survived and got a few shots. Unfortunately, the hotel where Dreher was staying would not permit a stray dog to stay inside. After a talk with a hotel manager, Fisht was allowed to stay tied in a corner in an indoor parking garage. Within minutes of Dreher leaving the garage to get her water, she pulled out of her collar and scurried around out of control. After security got involved, Dreher was concerned the hotel was on the verge of evicting him. He knew there was no other choice but to stay with her. He spent the next few hours sleeping on a lounge chair in the garage with Fisht peacefully at his side. Whenever he tried to leave, she'd once again act out. Dreher was now the prisoner.

"I had no options for the next night and finally decided in my sleepy stupor I had done all I could. She needed to go," Dreher said. "So I put her back out in the cold. I have never been so frustrated and emotionally devastated before. I felt like all I could do was literally put her in the cold. It was horrible."

Fisht wouldn't go far. Every morning she'd be waiting outside the hotel for her new friend. When Dreher went back to Denver to get a new Russian Visa, another worker kept an eye on Fisht. In Denver Dreher picked up a kennel and a name tag. Upon his return, he stole a bathmat from his hotel room and set up the kennel just off site since the hotel wouldn't allow it on its property. The next morning when Dreher walked out of the hotel, Fisht wasn't waiting. Curious, yet nervous, he went to see if the kennel was still where he left it. Much to his excitement it was -- with Fisht inside!

"I was tickled," said Dreher. I fed her and went off to work." 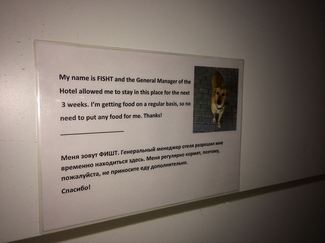 That night when Dreher returned to the hotel, Fisht was waiting. There was also a hand-written note from the hotel's general manager, who had rescued several dogs with his wife in the past. He learned of Dreher and decided to intervene. Even though Fisht still couldn't stay in Dreher's room, the kennel could be placed in a protected area. From then on, the hotel was actively interested in her health. Fisht received more inoculations from the vet, got microchipped and even a passport.

Since the beginning of the year, Fisht has been safe at a kennel about an hour-and-a-half away from the Olympic site. Dreher will return to Denver on March 18. He launched a campaign on the Internet to raise money to bring Fisht back with him, and he reached his goal. Fisht is now in training for her flight. 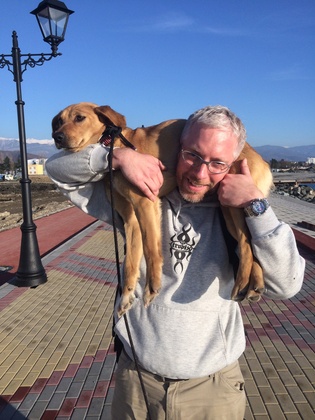 "The entire experience has been a bit harrowing," Dreher said. "I work very long hours, and with the relatively remote location of the kennel and the language barriers, it's been difficult at every turn. The last hurdle is the one I am worried about most -- getting her paperwork in order for the flight. I have one day from the end of my working contract to get her travel stamp from the local government vet and take care of everything. My Russian Visa expires the next day, so it'll be make or break time."

To donate to Dreher's campaign to help raise money for a colleague to rescue two dogs from Sochi, visit here.