I was just at the Skoll World Forum, probably the best conference in the world for meeting with top social entrepreneurs. As a longtime member of the Skoll community, I prize this week for the opportunity to talk frankly with peers about our biggest mutual challenges. Peer learning is the most valuable opportunity for a field that has no operator's manual -- like social entrepreneurship!

The constant theme is raising money for our social enterprises. But not just any money -- we talk about the most difficult money to raise: the unrestricted funding that is the lifeblood for a social entrepreneur. This kind of funding is essential for innovation, for responding to time-critical opportunities, prototyping new ideas and getting them to the point where they are a saleable product to customers and/or issue-focused donors. But, unrestricted funding is far harder to raise, because the donor is investing in the leadership of the organization as opposed to a specific set of deliverables. 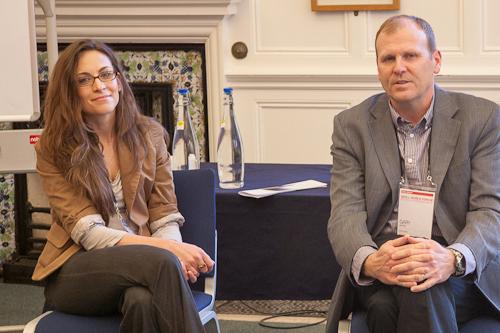 The best session all week for me was led by Gary White and Chevenee Reavis of Water.org, on an bold new solution that they had created for their social enterprise. Water.org pioneers new ways to bring capital to sanitation and clean water for people around the world. Once one of their ideas is established, they can mobilize large sums of capital restricted to that specific project or area.

Gary and Chevenee decided to create a $10 million Innovation Fund for Water.org, where each donor who participates needs to give $1 million (or more) toward the fund. The money is "lightly restricted," which means that it can only go to new and innovative activities. Because that's the sort of thing that social entrepreneurs want to get unrestricted money to do, getting money with these minimal restrictions is just about as good as receiving an unrestricted donation.

The senior social entrepreneurs in the audience were listening in rapt attention. This early portion of the Skoll conference is for Skoll awardee staff, the Skoll Foundation and key resources to grow the field. The social entrepreneurs had rapid-fire questions: How can I do that? How is it structured? How does it interact with your existing, core programs? Where do you find the donors? How much have you raised?

According to Gary and Chevenee, the donors investing in the fund (of course, they are donating the money, and not expecting to get it back as you would a loan or an equity investment) also participate in an advisory council that meets once a year. That way, there's more of a connection with the innovations being powered by the Fund, both the successful ones and the unsuccessful ones. Because of the high minimum, the amount of time to take care of the donors is much more practical than if there were 100 or 1,000 donors.

Water.org started with its founder, the actor Matt Damon, who contributed the first $1 million. It had a list of seven new projects that it would be able to do with this funding, to make this open-ended funding tangible. It's been working its network of donors interested in water issues who can make a commitment at this level, and have found three more donors for a total of $4 million so far. The goal is to raise a total of $10 million by 2014, and the donors commit to providing the money over a three-year period.

Not all of the SEs were as enthusiastic. Ned Breslin of Water for People said that all of his funding is allowed to be used for innovation, because he promises an end result, not a precise method of how to get there. So, he didn't think that selling innovation separately made sense for his work at all.

But, many of the others were eager to think through the challenges of adapting this model to their organization, and how it might work well. I mentioned a mini-grant program that my organization, Benetech, had for a while (and which I would love to have again if I had more innovation funding), where any staff member could propose to spend $25,000 or less on an exciting opportunity. I used the example of Kristen Cibelli, one of our field human rights workers, who got a mini-grant to go to meet with grassroots human rights groups in Liberia. While there, she met people from the Liberian Truth and Reconciliation Commission, and that turned into a huge multi-year project for us, all because of the initiative of one of our (then-)junior team members. And there were plenty of other examples of how modest innovation funding had led to new programs of major impact.

The Skoll World Forum is full of inspiring speakers (I remember Archbishop Desmond Tutu last year challenging us all to do more!). But, I think the most inspiring people are your peers: people like you making you think of what you could do more and better as a social entrepreneur. As Kim Tripp of the Skoll Foundation noted in her wrap-up, there is a handful of people who came home from Oxford wondering what they would do with an innovation fund. And, I have a feeling it would be some of the most powerful money raised by the nonprofit sector!