This November marks the 26th year anniversary of my family's immigration to the United States from Ireland, where we left behind our small cozy village called Knockraha for a little beach town in New York City called Rockaway. If you search for Knockraha online, only a handful of results will be returned, one of which is a Wikipedia entry which simply reads: "In the village there is a pub, church, primary school and community hall." And that's pretty much the truth, and it's all I knew, it's what I loved, and it was my Home.

We packed only a suitcase each, my brothers and I painstakingly made the decisions between what toys to take or leave, and we said goodbye to our family, friends, and classmates. I was in the middle of second grade at the time, and my teacher had to explain to my seven-year-old counterparts that I was going on a plane to America. I was leaving my home and community forever but didn't really know it.

It would take some time and of course the immediate submersion at my new school -
St. Francis de Sales - to realize that my family and I were in Rockaway to stay. I found out from my parents that we lived on a thin peninsula, with the Atlantic Ocean on one side and the bay on the other. We were close to a place called Brooklyn and actually part of a place called Queens, but still we were quite "off the map." We were, in effect, our own little town. Early on, I still couldn't forget my own little home back in Ireland, and when I used to see Air Lingus planes flying out East over the ocean, I used to well up inside with pangs of homesickness for my friends (and selfishly, my boxed away Barbies). Could this new town, this foreign peninsula, ever replace my own home?

In the twenty years that followed our big move, that question was answered over and over again for me in more ways than one. Like all residents in Rockaway, I came to know and love the beach, which was only a few steps away from our houses. Friends from other parts of the five boroughs were undoubtedly jealous of how accessible the beach was for us, how inviting the ocean was on those hot, humid, miserable days in July and August, and how peaceful a nice stroll or run was on the boardwalk. Of course, many came and still come by bus and train to partake in the beach life at Rockaway. In recent years, even trendy hipsters have taken our little town by storm. People from Rockaway would often refer to the influx of daily beach-goers as "DFD's," the acronym for "Down-for-the-Day'ers." Little did we know that at the same time, the natives could easily be ID'd themselves by any or all of the following signs: Reef sandals, a beach cruiser bike, a poncho from the Surf Shop, board shorts, a boogie or surf board, local food in hand (Pizza from Ciros or Plum Tomatoes, a Bagel from Hot Bagels, or a Sub from the 101 Deli), and last but certainly not least, the unique Rockaway drawl that is comparable and as identifiable as the Jersey Shore or Staten Island accents.

The funny thing is, those visitors that came to Rockaway in the summer, got out as quickly as possible in the winter months. The breeze that swept over the small peninsula that was a friend in the heat of summer, became a bitter enemy. Most residents in Rockaway and Breezy Point (the tip of the peninsula) who work or have gone to school in the City, know too well what it was like to wait in the chilling dark mornings for the rickety Green Lines Bus to show up, or what it is like to stand at the edge of the Broad Channel train platform to see signs of life from the shuttle. How isolating it felt to live so far away, yet even so, many of us who have commuted that rough ride to Manhattan over the years, knew each other, each other's families, our histories...and the commute was just one more part of the life we all shared. And that's just it, we shared similar experiences, a culture that was unlike any other towns around us, we shared memories, and in the last 11 years, the unity and resilience of our community would be tested, not only once but again and again and again...

On 9/11, we suffered one of the nation's most concentrated losses, with 59 people from Rockaway and 32 people from Breezy Point's even smaller population perishing when the towers fell. I remember reading the newspapers front to back everyday searching for, but hoping not to recognize, a familiar face or name among the lists of the missing and the dead. One day, I found that headline I didn't want to find: Xavier Boys Victims of 9/11 and below the handsome and grinning face of Charlie Heeran, who had gone to St. Francis with all of us, who had grown up happily in Rockaway with his close-knit family, and had so sadly died far too young. Inspired and impacted so much by Charlie's death, another resident, Michael Glover joined the Marines. In 2006, Lance Corporal Glover was killed in the line of duty in Iraq.

The tragedies for our small town did not stop there. Literally two months and a day after the Twin Tower attack, on November 12, 2001, American Airline Flight 587 en route to the Dominican Republic plummeted into Rockaway, killing all 260 aboard and five people on the ground. Kathleen Lawler and her son Christopher, a close friend of Charlie Heeran's, were two of those five who lost their lives in the crash.

Now, 11 years later, Hurricane Sandy is challenging the faith and spirit of community in the Rockaways one more time. In Breezy Point alone, over 111 homes were ravished by fires and floods. Sandy carved out a path of disaster in Rockaway as well, where fires destroyed homes and businesses in several sections, one of which was the very same area where the American Airline plane went down years before. Even more horrific and coincidental, was the tragic loss of the Harbor Light Pub, which was owned and established by Barbara and Bearnie Heeran, the parents of Charlie, mentioned above.

How does one family, one community pull together and begin to fathom overcoming such loss? Is it even possible? The thing that I have learned in my 20 years of living in Rockaway is that it is possible. But the only way we are able to do it is because everyone who lives in our small community regards Rockaway as their "Home." And when something happens to your Home and your Family, you get up and do something about it. You act. Within hours of this natural disaster happening, my Facebook was flooded with posts and groups from Rockaway who began to mobilize:

Shane Brennan, another St. Francis de Sales (SFDS) alumnus, traveled from San Diego to provide immediate aid to the community by bringing in water pumps and generators, even hand delivering one to my own mother's house. He and his brother, Eugene, started a charity within hours of the disaster happening. Jamie Jordan, another SFDS alumna, established the "Rockaway Emergency Plan" Facebook page where she has been coordinating volunteer and donation efforts. Catherine Maloney Larson, also a native of Rockaway, has been spearheading networking and live updates on Facebook despite living in Tampa. The "Rockaway Relief Effort" and "Rockaway Wish" pages are hubs on Facebook where residents have been able to get information and guidance on how to get aid. I, myself, have started a West Coast drive through my company, AOL, with a colleague to get donations and supplies over to our ravished hometowns early this week. A few others in Long Island and San Diego are organizing a "re-baby shower registry" for their friend, who gave birth only a week ago and lost practically everything. These are only a few small examples of the countless ways we have pulled together to help each other during this extremely difficult and trying time. We have camaraderie, unity, determination, and the will to make it through this because we have to. This is Rockaway, this is our Home.

What's fascinating is that even the definition of home itself, with the artificial borders that are oftentimes created between insular communities (in our case Breezy, Rockaway Beach, Far Rockaway, Broad Channel, and the outside world) is redefined. In this instance, the physical breaking down of boundaries helped people see the common ground, the common need. Just as the victims' families from the Dominican Republic came to Rockaway after the tragedy in 2001, now people from other towns including those so-called DFDs and hipsters are here volunteering in Rockaway and staying for more than just a day! People are walking the length of the Rockaways, crossing "turf-lines." People are graciously inviting honest clean up crews into their houses.

In the years that I have lived in Rockaway, I have seen the sun, I've enjoyed the peaceful breeze of the ocean, and I've basked on its warm sandy shores. But I, like all the other residents of this tiny community, have seen the dark days as well. As difficult as it is to see the surreal images of familiar streets in ruins, perhaps it is there that we find the truest meaning of Home: a community that lifts us up when times are the hardest, a family who offers their helping hands when our physical homes are no longer on the map.

My sister-in-law, Melanie Twohig, who also died too young, used to tell her son: "Home is in the heart." Some may dismiss this as a cliché, but immigrants, wanderers, and those afflicted by disasters, know the weight of these words. I, for one, have found home and heart in Rockaway. As have so many others.

I dedicate this post to all of my Family in Rockaway. I dedicate it, especially, to all those who have spent countless hours outside on the streets helping their neighbors and helping strangers. Their unseen labors go mostly unrecognized on Facebook and the news. Yet those acts remind us that Home is much more than a physical house and family is much more than blood relatives. Through their acts, they remind us that Home is a community of friends and strangers, whose fate is woven together. They remind us, too, that Family is a group who knows they're all in it together, even when disaster strikes.

If you would like information about Rockaway charities, please go here. 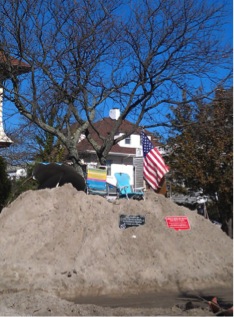