One of the most fascinating films ever made about the Holocaust is opening in theaters this weekend. Son of Saul, by Laszlo Nemes, takes the audience into the bowels of the death camps with strong realism. As if the Holocaust were not painful enough, this film shows us its absolute horror by following a Jewish man, Saul (Geza Rohrig), who, while working in the gas chambers to save his own life, finds the body of a boy he thinks is his son and decides to give him a proper Jewish burial. But this film takes a refreshing approach to this genre. This is not another film that beats you over the head with the lessons of the Holocaust. Instead, it engages the audiences with strong cinematic storytelling making this story relevant to a new generation of film appreciators. 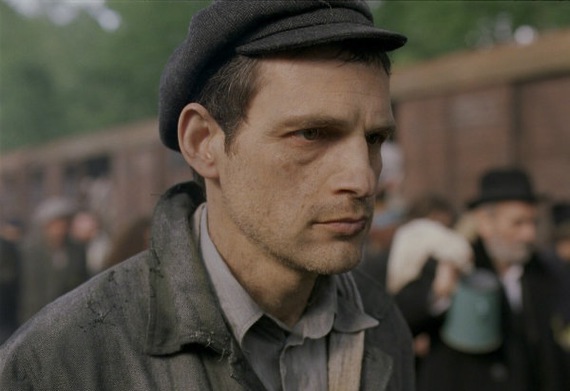 This film does not belong to the new wave of Holocaust films, which aim to show us the complexities of the German experience or ask ethical questions about the human condition or the banality of evil. Saul's experience is in no way relatable for anyone living in our modern Western world. Often, Holocaust films try to help find ways to keep the memory and the events relevant. Here, we focus on one man in a most inhuman situation, to which we cannot relate. We spend two days with Saul as he desperately searches for a way to accomplish his mission and maneuvers through the obstacles of the alternate reality of the death camp. What does make the film relevant today is its presentation of the atrocities that human beings can and still do commit, even today as a result of dehumanization.

What makes this film so unique is not its extraordinary story, for we have all seen and read about the death camps before. It is rather the cinematic language and perspective that Nemes uses to tell this story that makes it so powerful. The film is completely shot in long take close-ups of Saul. The camera follows him almost religiously. The entire story reveals itself from Saul's perspective, as we see him go through his journey. There are no cut aways or establishing shots. It feels almost like a documentary following one character.

In addition, the film is shot with a shallow depth of field, making the world around Saul look out of focus. The soft focus not only communicates the prisoners' state of mind, but it also, in a way, creates blinders for the audience, shielding us from the horrors in the background, which mostly happen off camera and are realized through sound. The handheld camera avoids the temptation to look left or right. Like the prisoners themselves, It keeps its head down and minds its own business, and focuses only on Saul.
These cinematic choices along with creative storytelling keeps even the weary of Holocaust film, engaged. It is a fresh take on an old story which I believe can make it a Holocaust film for people who do not want to see Holocaust films. The audience needs to get over there fear and prejudice of these themed films, and experience something new.

The film successfully takes you into Saul's world and leaves you feeling dizzy, as if you might have tasted the slightest bit of the unimaginable reality of a death camp. But the hope of the story, in all of this horror, is that it ultimately follows a man seeking to do a human act in the most inhumane place. There is a quote from Hillel in the Mishna that says, "In a place where there are no men, strive to be a man."
After a screening last night at JCC Manhattan Nemes explained proclaimed that this is the essence of the film. Its ultimate lesson for our world today, in a time when acts of inhumanity surround us, is to rise up with our humanity. The power of this story is in the notion that, while the death camps took away all humanity, a man could still attempt to do a human act.