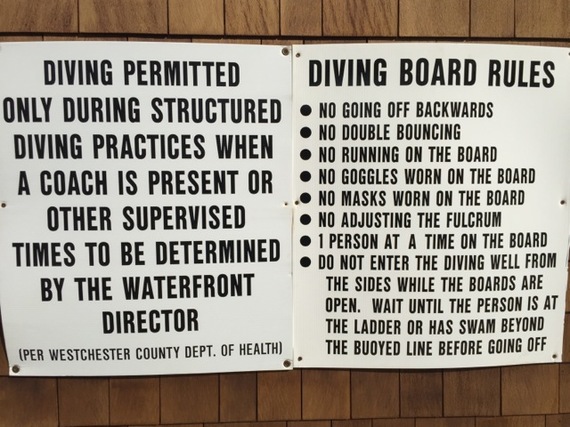 My children spent the first four weeks of summer at camp. The facility had a pool with a couple of one-meter diving springboards.

They should have had great fun, instead they were cast into a particularly American sort of purgatory. The rules said you were not allowed to dive off the diving board into 12-foot deep pool.

You could jump, but only forwards and only if you didn't try anything daring like bouncing up and down on the springboard before you propelled yourself through the air.

The rules were strictly enforced by a set of whistle-happy teenage lifeguards. The teens were empowered by a Pool Manager; the only thing keeping this guy upright was he appeared to have a chip on both shoulders.

I assumed the zealous regard for my children's safety was cover to avoid a hefty insurance payout in the unlikely event of an accident, but it was actually dictated by a local county ordinance. How un-American, to have government usurp the power of the market to regulate the joy out of life.

After four weeks of camp we landed in Lake Annecy in the foothills of the French Alps. The locals directed us to a public beach and there it was; manna from heaven for my closeted kids, a diving platform rising out of the water to the grand height of five meters (15 feet).

It didn't take long for them to strip off the psychological bubble wrap and start clambering up the stairs ready to try their luck on the three-meter platform.

There was one lifeguard, sunning himself on shore and doing his best to remind the tourists that the English had stolen the word nonchalant from the French. The diving platform was a free for all. I found standing five meters up snuffed out any sense of daring, but there were plenty of locals executing flips into the water below. Most of them seemed unable to rotate in multiples of 180 degrees, which made for some painful looking entries.

Given the French are not renowned for orderly queuing, one might have thought someone with a whistle and a red swimsuit might have been in order at the top of the platform, just to make sure all was clear before the next person slapped into the water.

But no, it was left entirely up to this group of humans to self-generate enough order to prevent a horrible accident. They managed to do so. My kids had a ball. My wife even took the plunge from on high, as part of her never-ending quest to demonstrate to her sons that they should not fall for the sort of woman who shies away from adventure.

Lake Annecy is one of the hidden gems of France. Lying in the first ranges of the Alps less than an hour south of Geneva, it is off the most heavily-beaten tourist path, but is frequented by enough English holidaymakers to make it accessible to those travellers who've long forgotten their high-school French.

It is paradise for those with a sense of adventure. For a mountain lake it is surprisingly warm. My children spent hours in the water. They chose water-skiing over sailing and when their fingers were like prunes we had a choice of hundreds of terrestrial activities.

The kids pumped for the ropes course. There was a sign indicating the minimum height required to do the course. My daughter barely qualified but none of the staff checked. Either they had a really good eye for millimeters or it was the roughest of guides.

The next day we went tandem paragliding; you clip yourself to a Frenchman with a parachute attached to his back, run down a steep mountain-top slope until the chute catches the wind and suddenly lifts you up into the air. The ride was surprisingly smooth. We were aloft for fifteen minutes before we landed in a field far below our takeoff spot. The kids wanted to do it again.

We did a via ferrata, which is a series of permanent cables and rungs that enable amateurs to ascend cliffs that would otherwise only be accessible to advanced rock climbers.

All this with minimal safety briefings and I never had to sign a waiver.

The French have struck a different balance between the individual and society. If you get injured in France the state will restore you to health (supplementary health insurance exists but the costs are firmly regulated). In America you need your own medical insurance. Insurance companies need to cover costs which brings litigation into play. Litigation exists in France, but the legal system doesn't use juries, which reduces the chances of a big payout. So business operators and their insurers are not faced with the need to cover that risk or avoid it by not doing anything risky in the first place.

Adventure businesses like the via ferrata are popping up all over Europe. The two we did in France were not legacies of some long-ago conflict, but purpose built for tourism. There are via ferrata in America. You can go paragliding, or canyoning here, but compared to France your options are far fewer and generally more expensive.

The American exception is the big business of skiing. Most skiing states have laws aimed at protecting resorts from liability. Which is ironic as the risk involved in paragliding or doing a via ferrata is centered on a catastrophic equipment failure. That is much less than the risk posed by hundreds of Bode Miller wannabes.

Back home I showed a few people the video of my daughter sprinting off the mountainside and paragliding into the abyss with Lake Annecy far below.

Some were in awe that it was even possible for an adult to do that, let alone a six-year-old. Others gave me a suspicious look as if they were making a mental note to never allow their child to go to my house on a play date. One person made an uneasy joke about child protection services.

It struck me that we Americans have lost something. Ironically the market has limited some of our freedom. But it is more than being able to dive off a springboard. Over exposure to the message that things are dangerous and we need to be stopped from doing them because they are uninsurable has had a more pernicious effect. Our collective willingness to take a risk, often one, which is much less fraught than it seems, is eroding.

Are we becoming too cautious?