Just a few years ago, I was the ideal candidate to be an angry, jaded middle-aged spinster. I was an unemployed and broke single mom, and for lots of reasons, it was impossible for me to even consider the prospect of ever finding happiness.

I carried so much emotional baggage, you'd think I should've just entered a convent and never been heard from again. Fortunately, the responsibility of mothering my daughters (then aged 4 and 7) prevented me from shutting down completely and giving up on love. 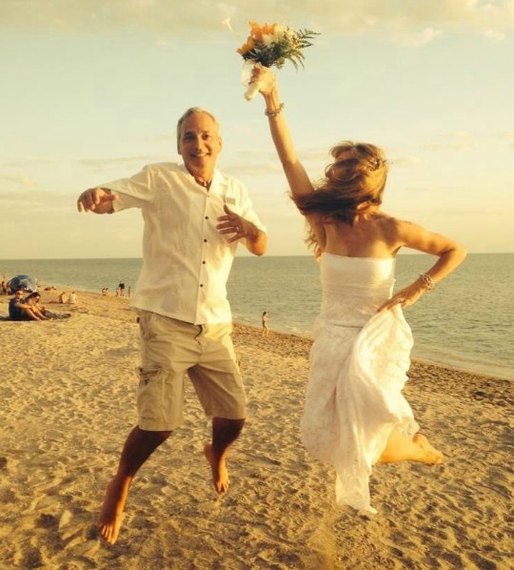 All my life I'd had relationships that ended in betrayal. I was lied to on a regular basis, cheated on with hookers, swindled, ignored and even date-raped. Throw in some verbal and emotional abuse, the kind that breaks down your self-esteem and sets you on the path to co-dependency and substance abuse, and you've got yourself the perfect recipe for becoming a bitter man-hater. The kind people look at and wonder, "Geez, what happened to her?"

After my divorce, I finally took a long, hard look at myself. I had battled depression and eating disorders for as long as I can remember. At the same time, I was ambitious, romantic and an idealist, yet also bratty and egotistical. In my late twenties, I once shattered every plate and glass in the kitchen in an outburst of rage and jealousy. In other words, I was hardly the perfect partner.

I realized that I had to come to terms with myself before I could be with anyone, to say nothing about having the relationship of my dreams. I knew I couldn't just sweep away all my faults, but I could avoid the triggers. Thanks, therapy! Recognizing my shortcomings and addressing them helped me become a happier, more confident woman. Finally feeling hopeful, I wrote a list of attributes for my perfect partner, although I wasn't sure he existed.

Soon after, I found that he did. He, too, had been through a series of tough relationships and was coming out of a painful divorce. He had also done his share of soul-searching and maybe that's why our souls met. All I know is that we met at the right time.

I sometimes wonder what it would have been like had we met in our twenties. We were much different people back then and may not have fully appreciated the qualities we now love about each other. I used to think a soulmate was a man who danced and drank until dawn. I was attracted to risk-takers who talked a big game. But it turned out to be all talk.

When you're in your mid-forties and you have kids, you love a man who treats you like a lady, who respects your children, who comes home when he says he will and who worries about putting food on the table. So yes, in midlife, my biggest turn on is a faithful, loyal, hard-working guy.

I will never forget when we first met and were having a drink at a friend's restaurant. He didn't brag about his adventures. He didn't show off or make false promises. He just opened up, talked about his son, his life, his ambitions and mentioned that he didn't watch television.

Sometimes, it's just that simple.

In April of 2014, we gathered at the beach for an intimate wedding ceremony with our kids and close family. We exchanged vows, rings and declarations of love. I told him how when we first met, he had me at "no TV." He looked straight into my soul and said he loved me more than beer.

As a beer drinker myself, I knew then that he really loved me.

At this stage of the game, we both know that a solid relationship is not based on lust, uncontrollable emotions, big talk or hanging out at swanky bars till dawn every night. Feeling butterflies in your stomach is always nice, but sometimes, just having someone whom you completely trust laying by your side is what love is really all about.

It's never, ever too late to find love.