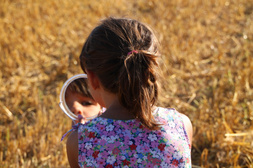 My six-year-old daughter stood with her hands on her hips, her face contorted into an expression of rage, her hair in a wild tousle around her shoulders, screaming, "You're not the boss of me!" She stood across from her little brother who is quite the bruiser, assertive and vocal. Born in the year of the Dragon and named after a Greek God, he lives up to his pedigree. They stood facing each other like two cowboys in an old western movie. Who would draw their pistol first?

Some mothers would be groaning at the sight of their kids squaring off. But any time I hear my daughter assert her voice and boundaries, I feel relief and pride. She came into the world screaming, limbs outstretched, full of spirit. But as a baby, she was very quiet. While some babies cry to get their mother's attention, she would make a little "ah" sound. If that didn't work, she might try again, just a little more loudly.

I was determined to teach my daughter to speak Greek, and just as my mother did with me, I spoke to her in Greek at all times. She understood everything I said to her. She followed commands, responded to requests, smiled at jokes. But she never spoke. When she still wasn't speaking at eighteen months I mentioned it to her pediatrician, who suggested we wait six months to see how many words she'd pick up. By the age of two she had just a handful of words, including mama and something approaching "big bear" for the Winnie the Pooh stuffie she kept within her reach at all times.

My gut told me something wasn't right with her speech development, and I insisted on a referral for evaluation. Her hearing tests came back fine, and there didn't appear to be a physiological reason for her silence. When I took her to a speech therapist for evaluation she pretended to be asleep in her stroller. When I lifted her out, she hid her face, avoiding the gaze of the therapist and her overtures with various toys.

After the evaluation, the speech therapist said that my daughter's speech was indeed delayed, but she was stopping short of diagnosing her with Apraxia. I had no idea what Apraxia was, but later learned it was a lifelong disorder where the brain struggles to plan the necessary movements of the tongue, lips, and mouth to form speech. She recommended twice-weekly speech therapy, and for me to stop speaking to her in Greek. She said, "Let's not worry about her knowing two languages, we need her to at least learn to speak English." I left feeling both depressed and guilty, as if it were somehow my fault that she couldn't speak English because of my desire for her to know Greek. But my mind also kept circling around that word, Apraxia.

My daughter would occasionally say a word, but then be unable to repeat it. One day I said the word "vulva," which she immediately picked up and would yell at random times, like in the grocery store. I noticed she didn't wave or say hello to others, and was extremely shy. In general, her ability to mimic seemed missing. I stopped speaking Greek completely. I struggled to find a speech therapist whose techniques worked well with my daughter's temperament. A common practice among therapists we tried seemed to be withholding a coveted toy until she repeated a word. This only made my daughter withdraw further and her stress became generalized into other areas of life. When her children's activity program offered a free speech evaluation, the speech therapist spoke to her for five minutes in a busy classroom and said to her assistant, "Did you see that? Did you see how she was reaching to say the word? She has Apraxia." There was that word again.

Each speech therapist I visited had a different opinion. One admonished me for discontinuing Greek and said the reason my daughter wasn't speaking was because she was controlling. Another said it isn't possible to diagnose Apraxia in a child so young. I finally found a speech therapist I liked who would hold a toy up next to her mouth and in slow, exaggerated motion, demonstrate the movements necessary to form a particular word. She employed a playful low-stress approach that enticed my daughter out of her shell, and helped her gain the confidence to try forming the words.

Aside from the worry of not knowing if my daughter would ever speak with ease, the financial commitment was crushing with twice-weekly therapy at over $100 per visit. When she turned three she was evaluated and found eligible for free speech therapy once per week through the local school district. At a repeat physical evaluation by an ear, nose, and throat doctor at the local children's hospital, I fearfully asked the doctor if she might have Apraxia. He said he wasn't sure, but that he himself did, as did his two sons, who had both graduated from Ivy League colleges. There was something immensely reassuring about this kind, successful man lowering the professional curtain and sharing his personal life with me to show me what was possible.

Quite randomly a neighbor offered me a free swing set that summer. My daughter became obsessed with swinging. She would swing every day. She would swing until she fell asleep in the swing. That summer, I noticed an improvement in her speech. She seemed to be picking up words and retaining them with more ease. It was like a faucet had turned on. She still had issues with articulating certain sounds and it took obvious effort to put two syllables together, but there was definite improvement. I have since learned that swinging is used as a therapeutic modality.

I was still nervous as I anticipated her starting preschool in the fall. When she started she took her Pooh bear with her for the next two years. Her teachers described her as engaging in "observational play," which essentially meant that she watched other kids play. My heart ached for her as I imagined her isolation and loneliness. But with time, her speech did improve to where she was almost caught up with her peers by kindergarten. She had even found the courage to leave her Pooh bear at home and start playing with friends instead of just observing them.

I don't know what her official diagnosis is or was - perhaps just a garden-variety speech delay with unknown causes. All I know is that when I see her stand up for herself and speak, asserting herself with a mighty roar, "You're not the boss of me!" my heart swells with relief, pride, love, and satisfaction. That little girl worked hard to get her voice, and I will always encourage her to use it.

More:
speech therapyParenting ParentsApraxiadaughters
Newsletter Sign Up
Raise the kind of person you'd like to know
Subscribe to our parenting newsletter.
Successfully Subscribed!
Realness delivered to your inbox